This page relates ‘Politics and Administration (2): Defence and Foreign Policy’ of the study on the Amarakoshodghatana of Kshirasvamin (in English) which represents a commentary on the Amarakosha of Amarasimha. These ancient texts belong the Kosha or “lexicography” category of Sanskrit literature which deals with the analysis and meaning of technical words from a variety of subjects, such as cosmology, anatomy, medicine, hygiene. The Amarakosa itself is one of the earliest of such text, dating from the 6th century A.D., while the Amarakoshodghatana is the earliest known commentary on that work.

Defence and foreign policy are inter-related. The state has to be defended from the hostile states. The science of Polity discusses the foreign policies from the stand point of the vijigīṣu, concentrating on how a state, desirous of extending its influence and expanding its territory should conduct its relations with foreign states. The foreign policies are capsuled into the ṣāḍguṇya—the collection of six measures which is associated with the theory of rājamaṇḍala or the circle of kings. All these terms are listed in Amarakośa and are well explained by Kṣīrasvāmin following Kauṭilya's Arthaśāstra.

(a) The theory of Rājamaṇḍala:

Amarakośa (II.8.9-12; pp.177-78) mentions synonyms of a King, an enemy (śatru), friend (mitra), a neutral king (udāsīna) and an enemy in the rear (pārṣṇigrāha). The term rājamaṇḍala or vijigīṣu does not find mention in the text.

The five terms explained by Kṣīrasvāmin and the rest as found in Arthaśāstra (VI. 2. 13-24) are presented here–

(iii) mitra–the friend of vijigīṣu, with territory immediately beyond that of an ari–

(iv) arimitra–the enemy's ally with territory boyond that of the mitra,

(vi) arimitramitra–the ally of the enemy's ally, beyond the mitramitra,

(vii) pārṣṇigrāha is an enemy at the rear of the vijigīṣu, he is so called as he may seize or attack the heels–

(viii) ākranda is a king who is the ruler of the country behind that of the pārṣṇigrāha; he is one for whose help a cry is or may be raised by the vijigīṣu.

(xii) udāsīna–an indifferent or neutral king, more powerful than the vijigīṣu, the ari and the madhyama–

The following diagram represents the position of the twelve kings with respect to the vijigīṣu: 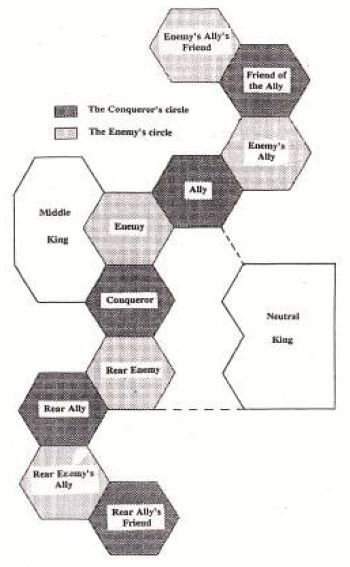 Amarakośa mentions that he is the ambassador.

All the foriegn policies are established and negotiated through him and Kauṭilya mentions three kinds of ambassadors (I.16)[1].

(iv) Āsanam–is to refrain from war–

(v) Dvaidham–is to divide and rule policy; unity with one and waging war with another or it is to befriend both enemies taking a stand point like that of the crow’s eye–

Kṣīrasvāmin further mentions that since these are means to help the king in conquering or defending himself, they are termed Guṇas–

Kṣīrasvāmin almost reflects the sentiments of Kauṭilya regarding the same[2].

Kṣīrasvāmin observes that some strategies like use of spell, deceit and magic were also employed as other means to overcome the enemy–

Two examples for these are found in the commentary of Kṣīrasvāmin while explaining terms in Nānārthavarga.

Kṣīrasvāmin explains that the act of splitting the enemy by bribing them with money and others is Kṛtya and cites from Kauṭilya (Arthaśāstra, I. 13. 22)–

(ii) Amarakośa mentions that the word rasa (III. 3.227; p. 327) is also used in the sense of poison. Kṣīrasvāmin illustrating it remarks that use of poison and bhikṣu are among the various methods employed to kill an enemy–

Kṣīrasvāmin explains each as follows:

Kṣaya is defined as the decline (in power and object) of the state of the country, compared to its former condition–

Sthāna is statutory status of the state or country–

Vṛddhi is growth or prosperity of the country–

He further adds explaining the term bheda (II. 8. 22; p. 180) that the mantra should be kept secretly within two for it is said that when a third person hears, it loses its value–

Explaining the term mantra in the Nānārtha varga (III. 3. 167; p. 311) in the meaning of secret counsel Kṣīrasvāmin defines it as that which is to be secretive–

The importance of mantra śakti was also well understood. Amarakośa gives ārambha or undertaking as one of the meaning for the word kriyā in the Nānārthavarga (III. 3. 156-57; p. 307-08).

Amarakośa lists synonyms of war, its related terms like weapons, fight, guard, general, combat, violence, fainting, revenge, defeat, victory, slaughter death, cemetery, dead body, prison and such other words in the kṣatriya varga. Some of them with special notes of Kṣīrasvāmin are analysed here[4].

Other details on horses and elephants used in war are discussed in the section on “Fauna”. Chariots are discussed under “Transportation”.