Kshatriya means something in Buddhism, Pali, Hinduism, Sanskrit, Jainism, Prakrit, the history of ancient India, Marathi, Hindi. If you want to know the exact meaning, history, etymology or English translation of this term then check out the descriptions on this page. Add your comment or reference to a book if you want to contribute to this summary article.

The Sanskrit terms Kṣatriya and Kṣatriyā can be transliterated into English as Ksatriya or Kshatriya, using the IAST transliteration scheme (?).

Alternative spellings of this word include Kshatriy. 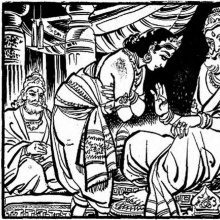 Kṣatriya (क्षत्रिय).—The Kṣatriyas should always be represented by a reddish yellow (gaura) color when painting the limbs (aṅgaracanā), according to Nāṭyaśāstra chapter 23. The painting is a component of nepathya (costumes and make-up) and is to be done in accordance with the science of āhāryābhinaya (extraneous representation).

One of the Hands denoting the Four Castes.—Kṣattriya (Kṣatriya): Śikhara with the left hand moved to and fro, Patāka with the right.

The kṣatriyas, or the ruling class, must govern the world in accordance with the rules and regulations enacted by great brāhmaṇas and saintly persons. As soon as the ruling class becomes irresponsible in regard to the religious principles, it becomes a burden on the earth.

Kṣatriya (क्षत्रिय).—Third of the four orders of the varṇāśrama system. A warrior who is inclined to fight and lead others. The administrative or protective occupation according to the system of four social and spiritual orders.

Kṣatriya (क्षत्रिय).—Those who are naturally very heroic and who tend to rule over others are called kṣatriyas. The divisions of brāhmaṇa, kṣatriya, vaiśya and śūdra are natural divisions within society. Indeed, everyone has a prescribed duty according to the varṇāśrama-dharma. Those who properly execute their prescribed duties live peacefully and are not disturbed by material conditions.

Kṣatriya (क्षत्रिय) is the name of a caste (varṇa) mentioned in the Nīlamatapurāṇa.—The Kṣatriyas They are described as skilled in the use of all sorts of weapons. As regards their status in society, their mention after the Brāhmaṇas indicates their social status in accordance with the vārtika on Pāṇini’s Aṣṭādhyāyī, II.2.34, which lays down the rule that the castes should be mentioned in the order of status, the highest one to come first and the lowest one last.

1b) Created out of the breast of Brahmā;1 the Aīndrasthānam.2 Distinctive traits;3 protection and other duties;4 definition of;5 destroyed by Kalki.6 and by Mahāpadmananda.7 seven clans distinguished; become Brahmanas by dāna, yajña and tapas.8 Their Pitṛs are Haviṣmantas; observe pollution for 12 days for father's death; pray to Devi;9 can take to Vaiśyakarma and not to Śūdrakarma.10

Kṣatriya (क्षत्रिय) is a name mentioned in the Mahābhārata (cf. I.60.47) and represents one of the many proper names used for people and places. Note: The Mahābhārata (mentioning Kṣatriya) is a Sanskrit epic poem consisting of 100,000 ślokas (metrical verses) and is over 2000 years old.

Kṣatriya (क्षत्रिय) or Kṣatrīyakula refers to the “warrior-family of snakes”, according to the 20th century Prayogasamuccaya (one of the most popular and widely practised book in toxicology in Malayalam).—[...] The specific distinguishing features, diet, place of dwelling, time of travel, direction of vision of each family are explained in detail. For example, main food of kṣatriya-kula (“warrior” family) snakes will be rat, water and snow. They travel during noon time, reside in big buildings, walls, holy trees etc. The author also opines that they stay usually in the Valmīka (anthill) and will come out attracted to the smell of first rain.

Kṣatriya (क्षत्रिय) refers to one of the “four castes” (varṇa) of ancient India, according to the 10th century Saurapurāṇa: one of the various Upapurāṇas depicting Śaivism.—In ancient India the society was divided into four principal castes, namely Brāhmaṇa, Kṣatriya, Vaiśya and Śūdra; and the dharmaśāstras employ the term varṇa to designate these castes.—The first three varṇas [viz.
Kṣatriya], who had the right to perform the upanayana and to study the Vedas, were called dvijas (twice-born).

Kṣatriya (क्षत्रिय) is the name of a Caste considered of equal nature as any other caste, according to the Svacchanda-tantra.—Accordingly, [verse 4.539c-545]—“O fair-faced one, all those who have been initiated by this ritual are of equal nature, whether they be Brahmins, Kṣatriyas, Vaiśyas, Śūdras, or others [of lower castes]. [For] they have been brought into a state of fusion with the nature of Śiva. All are said to be [Śivas,] wearers of [his] braids, their bodies dusted [like his] with ash. All Samayins should sit in a single row. Putrakas, Sādhakas, and Cumbakas [Ācāryas] should do the same. They may not sit according to the divisions of their former castes [e.g., Kṣatriyas]. [For] they are said to form but a single caste of Bhairava, auspicious and eternal. [...]”.

Kshatriyas are the kings and warriors in the Varna system. They come next after the Brahmanas in the ranking of the castes.

Kshatriya (क्षत्रिय): One of the four fundamental colours (Varnas) in Hindu tradition, consisting of the warriors, soldiers and rulers of society.

Kshatriya (Hindi: क्षत्रिय, kṣatriya from Sanskrit: क्षत्र, kṣatra) is the title of the princely military order in the Vedic society. They are the warrior and ruling caste in the varna system. The word means the protector of land. They are supposed to uphold the code of honour, bravery and loyalty. Everyone in the military and governing hierarchy from king to village chief and from general to foot-soldier is a kshatriya. In ancient Hindu society, a person's aptitude ('guna'), conduct ('karma') and nature ('swabhava') were considered to assign his occupation. In the early Vedic civilization, the warrior caste was called Rājanya & Kshatriya. The former was an adjectival form of Rājan "ruler, king" from a root Rāj "to rule", cognate to the Latin Rex "king" and the German Reich "empire".

A kṣatriya (क्षत्रिय) is a person with natural aptitude for protecting others, warfare, governance, politics, administration, and management.

Kṣatriya (क्षत्रिय) refers to “kings and great ministers” and represents one of the seven destination of rebirths in kāmadhātu, according to the 2nd century Mahāprajñāpāramitāśāstra chapter XLIX.—Accordingly, “someone gives with a perfect intention and maintains morality: he is reborn in the families of the Kṣatriyas. The Kṣatriyas are the kings (rājan) and great ministers (mahāmātya)”.

Kṣatriya (क्षत्रिय) (in Chinese: Ts'a-li) is the name of an ancient kingdom associated with Abhijit or Abhijinnakṣatra, as mentioned in chapter 18 of the Candragarbha: the 55th section of the Mahāsaṃnipāta-sūtra, a large compilation of Sūtras (texts) in Mahāyāna Buddhism partly available in Sanskrit, Tibetan and Chinese.—Chapter 18 deals with geographical astrology and, in conversation with Brahmarāja and others, Buddha explains how he entrusts the Nakṣatras [e.g., Abhijit] with a group of kingdoms [e.g., Kṣatriya] for the sake of protection and prosperity.

Ksatriya in Sanskrit, Khattiya in Pali. The second of the four Indian Castes at the time of Shakyamuni, they were the royal caste, the noble landlord, the warriors and the ruling castes.

Kṣatriya (क्षत्रिय).—Propagation of non-violence (ahiṃsā) by a person like a Brahmin is not effective as he lacks bravery. But when a brilliant person from the Kṣatriyas courageously gives up weapons and warfare and royal grandeur and talks of ahiṃsā, certainly it has an impact. The Brahmin’s propagation of religion is akin to the compassion of a weak shall not impact common people. This is the reason for the Jain religion  being removed from casteism  believes Tīrthaṅkara to have been born into the Kṣatriya caste. From Lord Vṛṣabhanātha to Lord Mahāvīra, all the Tīrthaṅkara born into the spotless firmament of the Kṣatriya caste, continuously spread unblemished light across the world and acquired the strength towards liberation cutting through the toughest of karmas.

[«previous (K) next»] — Kshatriya in India history glossary
Source: What is India: Inscriptions of the Śilāhāras

Kṣatriya refers to the “protectors of the realm”.—The Śilāhāras called themselves Kṣatriyas. As the Yājñavalkya-smṛti has stated, the primary duty of a Kṣatriya i.e. a ruler is the protection of his subjects. The Smṛti says further that the king receives one-sixth of the religious merit of his subjects if he protects them properly. If he fails in this duty and the subjects act irreligiously, he incurs half of the sins committed by them.

kṣatriya (क्षत्रिय).—m (S) pop. kṣatrī m The second of the four great classes of the Hindu people, or an individual of it, a Kshatriya. 2 This word is prefixed to certain words signifying things of which there are varieties, in order to designate the variety of the second grade. As prefixed to hirā, bhāṅga, sabajī, pimpaḷa &c., it expresses A diamond of inferior lustre, bhang &c. of the second quality.

kṣatriya (क्षत्रिय).—m The second of the 4 great classes of the Hindus.

Kṣatriya (क्षत्रिय) [Also spelled kshatriy]:—(nm) the second i.e. the warrior or the regal caste in the traditional Hindu caste-hierarchy; ~[tva] the attribute of the kshattriy caste, heroism.

1) [noun] one of the four major social class in ancient India, whose main occupation was military service or ruling a state.

2) [noun] a man belonging to this class.