Sculptures in temples in Kumbakonam: photo 574

Photo 574 of 640 in Gallery: Sculptures in temples in Kumbakonam 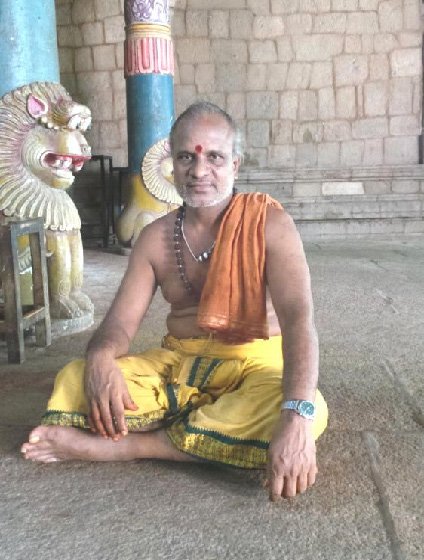 1. What is your name and designation Sir?

A. I am Siddhanatha Gurukkal. I am the head Arcakar here. My family has been serving here for the past 17 generations. We have served during the reigns of several kings. Ambal is taking care of us well ever since.

2. What do you say about the Murtis here?

A. Ambal is here Anugraha Murti and Sivan is Pradana Murti.

3. Can you tell something about the history of the temple.

A. Kamadhenu the divine cow is responsible for consecrating Sivan here. She received the boon from Siva here. Kamadhenu’s daughter Patti worshipped Sivan here and got Moksa. This place got the name Dhenupurisvarar (attached to Kamadhenu) or Pattisvaram [Pattisvara] (attached to the daughter). First one is the name of the Lord here and the second one is the name of the place meaning “Patti surrendered (Saranagati) to Isvara here”. Citrasena Maharaja, Markandeyar and Visvamitra came here and worshipped Sivan and got his grace.

This is also one of the important places where Sri Rama worshipped Sivan. Sri Rama had three Dosams or afflictions in his horoscope–

a. Viragatti Dosam [Dosa] which could be removed by worshipping Vinayaka.

b. Cayagatti Dosam [Dosa] which is–Rama killed Vali from behind. Though this act of Rama had a reason, it was an act of sin. As a Prayascita, Siva told Rama that if he worshipped him in this place then this sin could be pardoned. Rama is known to have come to this place and worshipped Siva. In the month of Margazhi on Amavasya night Isvara gave his Darsan to Rama here and his Dosam [Dosa] was removed.

This is also the Sthalam [Sthala] where Tirujnanasambandar composed his songs. When Tirujnanasambandar came here he was around 3 and a half years old. This three and a half year old child came here during afternoon hours in the scorching heat. Seeing this Lord Siva constructed a pearl canopy as shade and instructed that the child must be brought under the shade. The Bhutaganas went with the pearl canopy to bring Tirujnanasambandar and told him that the Lord had sent it. Siva willed that he should be able to see the child from where he stood. Hence in this temple Nandi, Vinayakar, Vannimaran, Balipitham are all slightly away from the centre line of the Sannidhi.

Besides this Cholas flourished from here. The Cholas had many capitals during their reign. One such capital was Pazhaiarai. It is believed that when Pazhaiarai was the Chola capital, that is the time Tirujnanasambandar came here. It is also believed that this temple was built much much before Raja Raja Chola. This is not just associated with the existing construction. Murti, Sthalam [Sthala] and Tirtham [Tirtha] was the definition of a temple in the olden days. That was so in a particular Yuga. Later in another Yuga the Kovil attained a small hutment like structure. Now in the Kaliyuga we can see such huge constructions which define a temple. So the belief is this temple existed much before this presently seen construction in a simpler form.

4. Can you tell something about the Durgai Amman here.

“Dukha Nivarani Durga–this is the special power that Paramesvara has bestowed upon Durga. Due to agitation of the mind, accumulation of worries results in ill health of human beings which needs different medicines. If these worries and troubles can be removed each day then it will result in happiness. This power has been bestowed upon Ambal. So this is called as “Sarva Dosa Nivarana Sthalam’. She is in a standing posture.

6. How is the Utsava Murti of Amman?

A. It is the same as the Mulavar.

7. Is there any special Vimana for Ambal?

A. Yes it is called as Manonmani Vimanam. All Ambal Vimanam” s have the same name and special structure.

8. Which direction does this temple face? How many entrances are there in this temple?

A. This temple faces north direction. There are 4 entrances in the entire temple. All the Gopurams are exactly in the four directions. Main temple is Siva’s (Sivalaya). Siva has given a separate Sannidhi for Durgai.

10. How many Prakarams are there in this temple?

A. There are 3 Pakarams for Siva and Durgai Amman Sannidhi is in the third Prakaram [Prakara].

11. What is present in each Prakaram?

12. What is the purpose of Durgai Amman?

A. Paramesvara” s wife is Parasakti. Parasakti takes different Avatarams to perform different functions. In Kaliyuga, Paramesvara has bestowed Durgai Amman and Vinayakar with specific powers to execute. In most places these two idols are

present together. The belief is that Vinayaka and Ambal are together taking care of

13. How many Mandapams does this temple have?

A. Vanni Maram [Mara] which is present in Siva” s Sannidhi is the Sthala Vrksam. Jnana Vavi is the Puskarni present inside the temple. Outside the Rajagopuram [Rajagopura] is another Puskarni called as Surya Puskarni. Other then this is Gayatri Tirtham [Tirtha]. Teppa Kulam [Kula] is the other.

16. Are there any special stories attached to Ambal?

A. She has blessed each family the way they have worshipped her. To some she is a daughter, to some she is the mother, to some others she is the sister. She assumes different roles as required. She is blessing people by appearing in their dreams and other ways. She has come here after killing Mahisa the demon.

17. Who are the Utsava Murtis in the Sivalaya and Amman Kovil?

18. What festival is celebrated for Durgai Amman?

A. During Adi Masam [Masa] all thirty days Utsavam [Utsava] is celebrated. During Navaratri Utsavam is celebrated. For Siva all Utsavams are celebrated according to other Sivalayas.

A. Only in the Vahana Mandapa of Sivalaya and in Ambal Sannidhi inside.

20. In olden days were any Devadasis associated with the temple?

A. Yes it is and there is no dearth of anything here. Government takes care of everything.

22. Can you sing a song for Ambal which is sung in the sanctum?