Kula means something in Buddhism, Pali, Hinduism, Sanskrit, Jainism, Prakrit, the history of ancient India, Marathi, Jainism, Prakrit, Hindi. If you want to know the exact meaning, history, etymology or English translation of this term then check out the descriptions on this page. Add your comment or reference to a book if you want to contribute to this summary article.

Alternative spellings of this word include Cool. 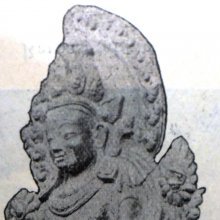 Kula (कुल).—According to the Kaulajñānanirṇaya, kula is defined as the condition in which the mind and the sight of the devotee merge and the senses lose their independence, the devotee’s own power becomes one with jīva, and his sight merges into the visible objects. Kula is identical with Śakti, who merges into Śiva, Śiva into action (kriya), Kriya into jñāna (knowledge), through icchā (desire) which merges finally into supreme Śiva.

1) Kula (कुल) refers to “part of a village”. It is also known as haṭṭa and uṣṭa. The boundaries are defined as “as much land as can be cultivated with two ploughs”. The word is used throughout Dharmaśāstra literature such as the Manusmṛti. (See the Manubhāṣya verse 7.119)

Kūla (कूल) refers to a “slope”, and is mentioned in verse 2.40-44 of the Aṣṭāṅgahṛdayasaṃhitā (Sūtrasthāna) by Vāgbhaṭa.—Accordingly, “[...] the shadow of a slope [viz., kūla], the enemy of a king, a beast of prey, a tusked [fanged] animal, and horned cattle; intercourse with wicked, dishonourable, and over-shrewd (people and) quarrel with superiors [...] (all these things) one shall eschew. In all activities of a wise (man) the world alone (is) his teacher”.

Note: Kūla (“slope”) has been rendered by gad-kha, lit. “face of rock”; cf. Mahāvyutpatti 8599, where the synonymous taṭa has been translated this way. What is apparently meant here is a precipice composed of brittle stone and liable to landslide; at any rate, gad-pa denotes in a more specific sense what is called by geologists pudding-stone or conglomerate: water-worn fragments of rock cemented into a mass.

1) Kula (कुल) is another name for the Kaumara mountain (identified with Śrīśaila in Andhra) and refers to one of the ten places visited by the Goddess on her pilgrimage, according to Tantric texts such as the Kubjikāmata-tantra, the earliest popular and most authoritative Tantra of the Kubjikā cult.—Accordingly, as the Goddess said: “I am (now) going again there to the Kula mountain in India that has been praised by those who know it as Śrīparvata from ages without beginning. (Also) called (mount) Kumāra, it is adorned with an umbrella for shade”.

2) Kula (कुल) refers to one of the male servants associated with Kāmarūpa, one of the sacred seats (pīṭha), according to the Manthānabhairavatantra, a vast sprawling work that belongs to a corpus of Tantric texts concerned with the worship of the goddess Kubjikā.—Nine of the twelve female servants (three in each of the first four seats), are low-caste women who we find, in other contexts, embody the Mothers (mātṛkā). The maids (cellakā) are Yoginīs and the servants their male counterparts [i.e., Kula]. These replace the spiritual ‘sons’ and ‘daughters’ the goddess generates and the guardians she appoints in the sacred seats listed in the ‘Kubjikāmatatantra’.

The prominent influence the Kula have had on the general development of Indian Tantra can be judged by the number of important scriptures that have come out of this movement; for example the Kaulavali Nirnaya Tantra, Kubjika Tantra, Kularnava Tantra, Parasurama-kalpa Sutra and Yogini Tantra.

Kula (कुल) refers to the “families of gods and goddesses”, according to Vajrayāna or Tibetan Buddhism.—[...] [The] Dhyāni Buddhas represent the five Skandhas or the five cosmic elements of which the world is composed. They are here described as the progenitors of the five Kulas or families of gods and goddesses. The families owe allegiance to their progenitors who are known as Kuleśas or Lords of Families. In the Guhyasamāja it is said: “The five Kulas (families) are the Dveṣa (hatred), Moha (delusion), Rāga (attachment), Cintāmaṇi (Wishing Gem), and Samaya, (convention) which conduce to the attainment of all desires and emancipation”.

Kula (कुल) refers to a “group of sects” and represents one of the ten persons suitable for rendering services, according to chapter 1.1 [ādīśvara-caritra] of Hemacandra’s 11th century Triṣaṣṭiśalākāpuruṣacaritra (“lives of the 63 illustrious persons”): a Sanskrit epic poem narrating the history and legends of sixty-three important persons in Jainism.—Accordingly, “[...] Vajranābha acquired strong Tirthakṛt-body-making and family-karma by the twenty sthānakas as follows:—[...] The sixteenth sthāna is the rendering of service by food, drink, etc., to the ten persons, Ācārya, etc. [viz., Kula] [...]”.

Kula (कुल, “family”) as in kula-mada refers to “pride of family” and represents one of the eight forms of vainglory (mada), according to Samantabhadra in his Ratna-Karaṇḍa-śrāvakācāra (with commentary of Prabhācandra). These eight madas are included in the twenty-five blemishes (dṛg-doṣas), which are generally held to be the eight madas, the three mūḍhatās, the six anāyatanas, and the eight doṣas.

Kūla (कूल) refers to a name-ending for place-names according to Pāṇini VI.2.129. Pāṇini also cautions his readers that the etymological meaning of place-names should not be held authoritative since the name should vanish when the people leave the place who gave their name to it.

Kula.—(LL), Jain; a particular section of the Jains. Cf. udhad8īyā-jhumpad8īya-kula (LP), ‘farmers on whom revenue is fixed in a lump sum and who live in huts’. Cf. kulam (EI 25), a land measure; equal to 2 halas. Note: kula is defined in the “Indian epigraphical glossary” as it can be found on ancient inscriptions commonly written in Sanskrit, Prakrit or Dravidian languages.

Kūla.—(SITI), tax on grains and pulses; cf. Tamil kiru- kūlam. Cf. Tamil kūlam (SII 1), a market. Note: kūla is defined in the “Indian epigraphical glossary” as it can be found on ancient inscriptions commonly written in Sanskrit, Prakrit or Dravidian languages.

-laḥ The head of a guild or corporation.

(-laḥ) An artist of celebrated descent. f. (-liḥ or -lī) A prickly nightshade: see kaṇṭakārī, &c. (-lī) A wife’s elder sister. E. kul to accumulate, ka affix, or kuṅ to sound, and lak affix, or ku the earth, and la who takes or possesses, from lā with ḍa aff.

4) the residence of a family, seat of a community, inhabited country (as much ground as can be ploughed by two ploughs each drawn by six bulls [commentator or commentary] on [Manu-smṛti vii, 119])

6) a noble or eminent family or race, [Manu-smṛti; Mahābhārata] etc.

11) (with Śāktas) Name of Śakti and of the rites observed in her worship (cf. kaula)

13) m. the chief of a corporation or guild, [cf. Lexicographers, esp. such as amarasiṃha, halāyudha, hemacandra, etc.]

22) Name of a locality [gana] dhūmādi

Kula (कुल) in the Sanskrit language is related to the Prakrit words: Kula, Kūla.

1) Kula (कुल) in the Prakrit language is related to the Sanskrit word: Kula.