Vahana means something in Buddhism, Pali, Hinduism, Sanskrit, the history of ancient India, Marathi, Jainism, Prakrit, Hindi. If you want to know the exact meaning, history, etymology or English translation of this term then check out the descriptions on this page. Add your comment or reference to a book if you want to contribute to this summary article.

Alternative spellings of this word include Vahan. 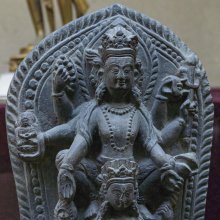 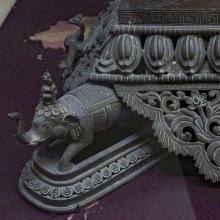 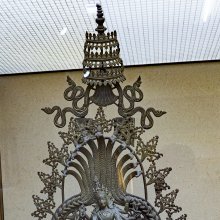 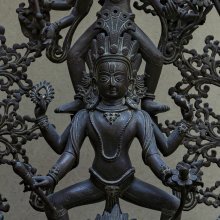 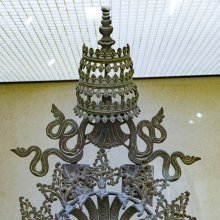 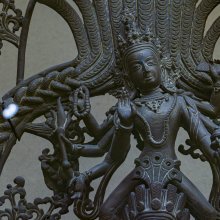 1) Vāhana (वाहन) refers to “vehicles”, which are mentioned as obtainable through the worship of Śiva, according to the Śivapurāṇa 2.1.14:—“[...] for achieving glory with plenty of vehicles (vāhana), worship for a thousand times shall be performed. A person desiring salvation shall worship Śiva five crores of times with deep devotion”.

2) Vāhana (वाहन) refers to “Vīrabhadra’s chariot”, according to the Śivapurāṇa 2.2.33. Accordingly, as Brahmā narrated to Nārada:—“[...] Receiving his command, with his head bowed down in reverence, Vīrabhadra set off immediately to the place of sacrifice. [...] The chariots (vāhana) numbered as many as two thousand Nalvas of land could contain. Ten thousand lions pulled the chariots strenuously”.

Vāhana (वाहन).—(conveyance) To know about the conveyances of Rudra, Yama and so on, see under Jaladhi.

1b) Different riding animals used by warriors in the battlefield described.*

Vāhana (वाहन) refers to the “vehicles” (of fighting men), according to the Bṛhatsaṃhitā (chapter 4), an encyclopedic Sanskrit work written by Varāhamihira mainly focusing on the science of ancient Indian astronomy astronomy (Jyotiṣa).—Accordingly, “If Jupiter should be eclipsed by the lunar disc the men of Gāndhāra, of Sauvīraka, of Sindhu and of Kīra (Kāśmīra) the rulers of the Draviḍa countries and Brāhmins as well as food grains and mountains will suffer for ten months. If Mars should be so eclipsed the rulers of Traigarta (Lāhora) and of Mālavā, with their fighting men in their cars [i.e., vāhana], the chiefs of Kulinda, the rulers of Śibi, of Audha, of Kuru (Delhi), of Matsya and of Śukti will suffer for six months”.

Vāhana (वाहन) refers to “vehicles”, according to the Kubjikāmata-tantra, the earliest popular and most authoritative Tantra of the Kubjikā cult.—Accordingly, “One who, having abandoned a teacher who is blissful and Command is radiant, goes to another, is obstructed everywhere, like a king who has lost his kingdom. He who maintains his body (pure), (guards his) knowledge of (the Kaula sacrificial) substances, (looks after the) clothes and vehicles (vastra-vāhana) of his teacher is worthy of receiving initiation”.

One of the three palaces of Sikhi Buddha before his Renunciation. Bu.xxi.16; but BuA. (p. 201) calls it Narivasabha.

Vāhana (वाहन) is the twenty-sixth of sixty digits (decimal place) in an special enumeration system mentioned by Vasubandhu in his Abhidharmakośa (“treasury of knowledge”). The explanations of the measure of years, eons, and so forth must be comprehended through calculation based on a numerical system. Enumeration begins from one and increases by a factor of ten for each shift in decimal place. The sixtieth number in this series is called “countless”.

Among these decimal positions (e.g., vāhana), the first nine positions from one to one hundred million are called ‘single set enumeration’. From a billion up to, but not including countless is “the enumeration of the great companion” and is called the ‘recurring enumeration’.

Vāhana.—(LP), a load-carrier; a cart, ship, etc. See vahitra. Note: vāhana is defined in the “Indian epigraphical glossary” as it can be found on ancient inscriptions commonly written in Sanskrit, Prakrit or Dravidian languages.

vahana (वहन).—n (S) A vehicle or means of conveyance in general. 2 Carrying or conveying.

6) The undermost part of a column.

(-naṃ) 1. A vehicle, a conveyance of any kind, as a horse, an elephant, a carriage. 2. Carrying, conveying, &c. 3. Making effort or exertion. E. vah to bear, causal form, or vāh to endeavour, lyuṭ aff.

1) Vahaṇa (वहण) in the Prakrit language is related to the Sanskrit word: Vadhana.

1) [noun] the act of bearing, carrying or conveying (something) on onself.

2) [noun] a carrying of goods from one place to another (using vehicles).

3) [noun] any means in or by which someone travels or something is carried or conveyed; a vehicle.