Khadga means something in Buddhism, Pali, Hinduism, Sanskrit, Jainism, Prakrit, Marathi, Hindi. If you want to know the exact meaning, history, etymology or English translation of this term then check out the descriptions on this page. Add your comment or reference to a book if you want to contribute to this summary article.

Alternative spellings of this word include Khadag. 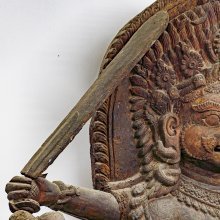 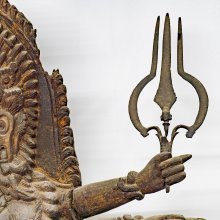 Khaḍga (खड्ग, “sword”):—One of the nine symbols representing the cosmic principles of the universe, according to the Pāñcarātra literature. These nine weapons and ornaments symbolize the principles which they represent as the presiding deity. The Sword (khaḍga) represents knowledge.

“The sword which Śrī Kṛṣṇa possess is the sword of Immaculate Wisdom, The sheath in which it is kept is the sheath of Ignorance.” (V.P. 1;22;73.)

The sword represents Pure Knowledge (jnāna) whose substance is wisdom (vidya)—It is called nandaka which means the ‘source-of-joy.’ This flaming sword is the powerful weapon which destroys ignorance. The sheath represents nescience (avidya) which is the fundamental problem of human existence—ignorance not of data and science but of who we really are in essence—pure conscious entities (jīvas) having a human experience.

The Khaḍga (खड्ग, “sword”) is one of the objects Kālī is displayed as holding in one of her hands. It represents discrimination and wisdom.

The Khaḍga — sword - represents discrimination and wisdom. Through discriminating between the real and the unreal, the truth and the untruth we gradually progress towards insight and wisdom which culminates in the elimination of the ego. Our spiritual practice does not consist of achieving anything but rather removing those conditioning factors which obscure the vision of the Divine which is our essential, natural state.

Khaḍga is a sword, long or short, and is used along with a kheṭaka or shield made of wood or hide. The khaḍga is either single-edged or double-edged and has a handle which is not different from the handle of swords seen in the pictures of trhe Crusaders and the early kings of Europe.

Khaḍga (Sword) - Sword of wisdom which cuts through illusion and destroys all ignorance- hidden within all of us like a scabbard - needs to be withdrawn with skill and used with care and precision.

Khaḍga (खड्ग, “sword”) refers to one of the several “attributes” (āyudha) or “accessories” of a detiy commonly seen depicted in Hindu iconography, defined according to texts dealing with śilpa (arts and crafs), known as śilpaśāstras.—Khaḍga is a sword, long or short, and is used along with a kheṭaka or shield made of wood or hide. The khaḍga is either single-edged or double-edged and has a handle.

Khaḍga (खड्ग) is a Sanskrit word referring to the animal “rhinoceros”. The meat of this animal is part of the māṃsavarga (‘group of flesh’), which is used throughout Ayurvedic literature. The animal Khaḍga is part of the sub-group named Ānupamṛga, refering to animals “who live in marshy land”. It was classified by Caraka in his Carakasaṃhitā sūtrasthāna (chapter 27), a classical Ayurvedic work. Caraka defined such groups (vargas) based on the dietic properties of the substance. According to Monier-Williams, Khaḍga can also refer to a calf with horns half grown

The meat of the Rhinoceros (khaḍga) is obstructing to channels, strength-promoting, sweet, uncting, bulk-promoting and beneficial for complexion. It alleviates fatigue and vāta.

Khaḍga (खड्ग) refers to a “sword”, mentioned as one of the items held in the hands (hasta) of the Goddess (Devī), according to the Śivapurāṇa 2.2.12. Accordingly as Brahmā narrated to Nārada:—“[...] on seeing the mother of the universe cosmic in form, Dakṣa the lord of the subjects considered himself well rewarded. With various sorts of prayer he eulogised and bowed to the Goddess (Devī) mother of the universe, Kālikā seated on a lion, dark-complexioned, with four arms (caturbhuja) and beautiful face, the bestower of the boon, the abode of safety, holding a blue lotus and the sword (khaḍga) in her hands (hasta), comely with reddish eyes and with beautiful dishevelled hair”.

Khadga (खद्ग).—Rhinoceros; flesh very good for śrāddha, but horn to be thrown away.*

Khaḍga (खड्ग) is a name mentioned in the Mahābhārata (cf. IX.44.62) and represents one of the many proper names used for people and places. Note: The Mahābhārata (mentioning Khaḍga) is a Sanskrit epic poem consisting of 100,000 ślokas (metrical verses) and is over 2000 years old.

Khaḍga (खड्ग) is the name of a merchant’s son (vaṇikputra) from Dhavala, according to the Kathāsaritsāgara, chapter 56. Accordingly, as Khaḍga said to Cakra: “... I am a merchant’s son named Khaḍga, and because I did not obey the commands of my parents they were angry, and in wrath laid this curse upon me: ‘Because, wicked son, you torture us like a hot wheel placed on the head, therefore such shall be your punishment’”.

The story of Khaḍga was narrated by Candrasvāmin to his son Mahīpāla in order to demonstrate that “one who is cursed by his father and mother does not long enjoy prosperity”.

The Kathāsaritsāgara (‘ocean of streams of story’), mentioning Khaḍga, is a famous Sanskrit epic story revolving around prince Naravāhanadatta and his quest to become the emperor of the vidyādharas (celestial beings). The work is said to have been an adaptation of Guṇāḍhya’s Bṛhatkathā consisting of 100,000 verses, which in turn is part of a larger work containing 700,000 verses.

Khaḍga (खड्ग) refers to one of the various Devatā weapons and represents a type of “temple implement (instrument)” as described in the Karaṇalakṣaṇavidhi-paṭala section of the Uttara-Kāmikāgama.—The instruments should be according to the particular śāstra followed at the temple. Some of the instruments mentioned are weapons of all Devatās including [viz., khaḍga].

Khaḍga (खड्ग) or Gaṇḍaka refers to the animal “Rhinoceros” (Rhinoceros unicornis).—The Smṛtis mention several domestic as well as wild animals that are enumerated in context of specifying expiation for killing them, the flesh being used as a dietary article to give satisfaction to the Manes (Pitṛs) in Śrāddha rites, the law of transmigration due to various sins committed as well as in the context of specifying gifts to be given on various occasions. These animals [viz., Khaḍga] are chiefly mentioned in the Manusmṛti, Parāśarasmṛti [Chap.6], Gautamasmṛti [17.2 and 15.1], Śātātapasmṛti [II.45-54], Uśānasmṛti [IX.7-9; IX.12-13], Yājñavalkyasmṛti [I.170-171; I.175; I.258- 260], Viṣṇusmṛti [51.3;51.6;51.26;51.33;80.3-14], Uttarāṅgirasasmṛti [X.15-17], Prajāpatismṛti [Śrāddhatyājyavastuvarṇanam. 138-143], 9 Kāśyapasmṛti [Section on Prāyaścittavarṇanam], Vṛddha Hārītasmṛti [6.253-255] and Kātyāyanasmṛti [27.11].

Khaḍga (खड्ग, “sword”):—One of the objects that Yama is displayed carrying. Yama, the vedic God of death, represents the embodiment of Dharma. Yama rules over the kingdom of the dead and binds humankind according to the fruits of their karma.

Khaḍga (खड्ग) is the reading in the Maitrāyaṇī Saṃhitā of the name of an animal which, in the text of the Vājasaneyi Saṃhitā, variously appears as Khaṅga and Khaḍga. The “rhinoceros” seems clearly to be meant. In the Śāṅkhāyana Śrauta Sūtra a “rhinoceros hide” is mentioned as the covering of a chariot.

Khaḍga (खड्ग) literally means “that which cuts”. Sword is a very ancient weapon of duel and war. In iconography, various types of swords have been shown in the hands of the deities. Three types of swords are more well-known:

Other varieties like Candrahāsa used by Rāvaṇa and Kṛpāṇa are also mentioned in the texts.

Khaḍga (खड्ग) is the name of a Rāśi (zodiac sign) mentioned as attending the teachings in the 6th century Mañjuśrīmūlakalpa: one of the largest Kriyā Tantras devoted to Mañjuśrī (the Bodhisattva of wisdom) representing an encyclopedia of knowledge primarily concerned with ritualistic elements in Buddhism. The teachings in this text originate from Mañjuśrī and were taught to and by Buddha Śākyamuni in the presence of a large audience (including Khaḍga).

2) The horn of a rhinoceros.

Search found 22 books and stories containing Khadga, Khaḍga, Khāḍga; (plurals include: Khadgas, Khaḍgas, Khāḍgas). You can also click to the full overview containing English textual excerpts. Below are direct links for the most relevant articles:

Chapter 50 - On the Sword (khaḍga-lakṣaṇa)

Chapter 69 - Khaḍgatīriha and other Holy Centres