Kamadhenu means something in Hinduism, Sanskrit, Jainism, Prakrit, the history of ancient India, Marathi. If you want to know the exact meaning, history, etymology or English translation of this term then check out the descriptions on this page. Add your comment or reference to a book if you want to contribute to this summary article. 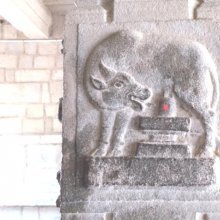 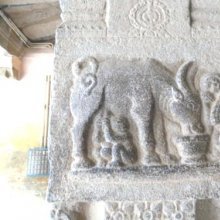 The surabhi cow is also called kāmadhenu. Although Jamadagni possessed only one kāmadhenu, he was able to get from it everything desirable.

Kāmadhenu (कामधेनु) refers to “a cow who can fulfil all desires”. (cf. Glossary page from Śrīmad-Bhagavad-Gītā).

1) Kāmadhenu (कामधेनु, “Wish-Fulfilling Cow”):—One of the names of Mahāsarasvatī (sattva-form of Mahādevī). Kāmadhenu refers to the Devī’s nurturing aspect. Mahālakṣmī is one of the three primary forms of Devī. Not to be confused with Lakṣmī, she is a more powerful cosmic aspect (vyaṣṭi) of Devi and represents the guṇa (universal energy) named sattva. Also see the Devī Māhātmya, a Sanskrit work from the 5th century, incorporated into the Mārkaṇḍeya-Purāṇa.

2) Kāmadhenu (कामधेनु, “Wish-Fulfilling Cow”):—One of the female offspring from Mahākālī (tamas-form of Mahādevī). Mahākālī is one of the three primary forms of Devī, the other two being Mahālakṣmī and Mahāsarasvatī. Not to be confused with Kālī, she is a more powerful cosmic aspect (vyaṣṭi) of Devi and represents the guṇa (universal energy) named tamas. Also see the Devī Māhātmya, a Sanskrit work from the 5th century, incorporated into the Mārkaṇḍeya-Purāṇa.

3) Kāmadhenu (कामधेनु, “the wish-cow”):—One of the names of Sarasvatī, the Hindu goddess of speech, eloquence and all forms of knowledge.

Kāmadhenu (कामधेनु) refers to a “wish-fulfilling cow”, according to the King Vatsarāja’s Pūjāstuti called the Kāmasiddhistuti (also Vāmakeśvarīstuti), guiding one through the worship of the Goddess Nityā.—Accordingly, “One who recites this eulogy of Kāmeśvarī called Kāmasiddhi, which serves as a very auspicious wish-fulfilling cow (atimaṅgala-kāmadhenu), placing trust [in her], is specially chosen by [the goddesses of] Beauty, Prosperity, Eloquence, and Treasury of Qualities. So, what would he do with any [other] lovers?”.

Kāmadhenu (कामधेनु).—(SURABHI—NANDINĪ). General. She is the first mother of cattle. She is a goddess with marvellous powers and attainments who gives milk whenever needed by gods and sages. The Purāṇas declare that all the cattle in the world today are descended from Kāmadhenu. (See full article at Story of Kāmadhenu from the Puranic encyclopaedia by Vettam Mani)

1b) Jamadagni's cow providing hospitality to Haihaya hosts; bound by king's servants, she kicked off its shackles and flew in the air.*

Kāmadhenu (कामधेनु) or Kāmadhenumudrā or Surabhi is the name of a mudrā described in the Īśvarasaṃhitā 44-46.—Accordingly, “the two hands are to be closely knit and kept facing downwards, the two little fingers and thumbs are to be well pressed together, the pairs of the middle fingers are to be placed each on the back of the opposite palm. The pair of ring fingers and index fingers are to be apart. This is named kāmadhenumudrā which fulfills all desires”. Mūdra (eg., Kāmadhenu-mudrā) is so called as it gives joy to the tattvas in the form of karman for those who offer spotless worship, drive out the defects which move about within and without and sealing up of what is done.

[«previous (K) next»] — Kamadhenu in Shilpashastra glossary
Source: Shodhganga: The significance of the mūla-beras (śilpa)

Kāmadhenu (कामधेनु) refers to the “celestial cow” and represents one of the several “attributes” (āyudha) or “accessories” of a detiy commonly seen depicted in Hindu iconography, defined according to texts dealing with śilpa (arts and crafs), known as śilpaśāstras.—The śilpa texts have classified the various accessories under the broad heading of āyudha or karuvi (implement), including even flowers, animals, and musical instruments. The animals and birds found as vehicles for the deities or held as attributes or weapons in the hands of the deities are, for example, Kāmadhenu.

Note: Kāmadhenu is the divine cow found in the Indra-loka with a cow’s body and woman’s face. The milk given by Kāmadhenu is inexhaustitle.

Kamadhenu sprang forth from the chruning of the ocean-of-milk, and was claimed by Indra as his property. It is capable of yielding any item desired by him. It also had a divine calf Nandini, which was gifted to Vasishta by Indra.

Kamadhenu is also known as Surabhi in some texts.

Kamadhenu is a divine bovine-goddess described in Hindu mythology as the mother of all cows. All cows are venerated in Hinduism as the earthly embodiment of the Kamadhenu. As such, Kamadhenu is not worshipped independently as a goddess, rather, she is honored by the veneration of cows in general throughout the observant Hindu population.

Hindu scriptures provide diverse accounts of the birth of Kamadhenu. While some narrate that she emerged from the churning of the cosmic ocean, others describe her as the daughter of the creator god Daksha, and as the wife of the sage Kashyapa. Still other scriptures narrate that Kamadhenu was in the possession of either Jamadagni or Vasistha (both ancient sages), and that kings who tried to steal her from the sage ultimately faced dire consequences for their actions.

[«previous (K) next»] — Kamadhenu in Jainism glossary
Source: The University of Sydney: A study of the Twelve Reflections

Kāmadhenu (कामधेनु) refers to the “cow that satisfies all desires”, according to the 11th century Jñānārṇava, a treatise on Jain Yoga in roughly 2200 Sanskrit verses composed by Śubhacandra.—Accordingly, “The wishing gem, divine treasure, cow of heaven [com.—kāmadhenu—‘the cow that satisfies all desires’], [and] wishing trees along with Lakṣmī—I think these are servants existing from ancient times of the doctrine. The doctrine bestows upon embodied souls prosperity which is desired by Indra and the lords of men and snakes, and is to be revered in the three worlds”.

Kāma-dhenu.—(EI 16), name of a mahādāna. Note: kāma-dhenu is defined in the “Indian epigraphical glossary” as it can be found on ancient inscriptions commonly written in Sanskrit, Prakrit or Dravidian languages.

kāmadhēnu (कामधेनु).—f (S) A cow fabled to have the power of gratifying every wish of her owner. Hence applied to a cow that yields milk abundantly; to a patron courteous and obliging; to a servant of varied talents and skill; to a field or tree exceedingly productive; to a book treating on several subjects; to a garment or other article applicable to various uses; to any polychrest, panacea, or all-supplying or all-serving thing or person.

1) Kāmadhenu (कामधेनु):—[=kāma-dhenu] [from kāma] f. the mythical cow of Vasiṣṭha which satisfies all desires, cow of plenty (= surabhi), [Kathāsaritsāgara; Brahma-purāṇa]

1) [noun] (myth.) a heavenly cow yielding all desires; the cow of plenty.

2) [noun] a person fulfilling the desires (of another).