Mandapa means something in Hinduism, Sanskrit, Buddhism, Pali, the history of ancient India, Marathi. If you want to know the exact meaning, history, etymology or English translation of this term then check out the descriptions on this page. Add your comment or reference to a book if you want to contribute to this summary article. 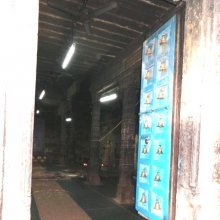 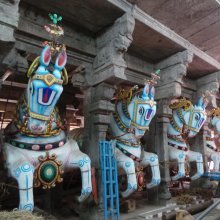 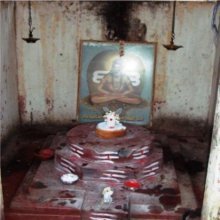 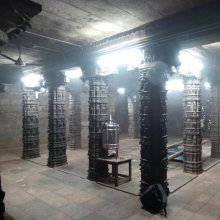 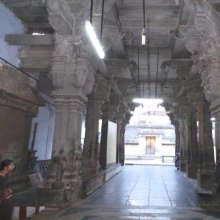 Maṇḍapa (मण्डप) is a Sanskrit technical term translating to “pavilion” or “porch”, which as a detached temple building serves various educational and recreational purposes. It can also be translated as a “pillared hall”. It is used throughout Vāstuśāstra literature. The 11th-century Samarāṅgaṇasūtradhāra (chapter 66-67) by Bhojadeva describes thirty-five types of Maṇḍapas divided in two groups.

A Maṇḍapa (मण्डप) in conncetion with the Hindu Temple is a detached temple, a pavilion, an open hall. But they are not exhaustive. We know that in India some of the temples and monasteries of old grew into universities. The more famous among them had invariable attached to them these detached buildings to server as rest-houses, congregational places and places for sermons, discourses and religious discussions and other allied necessities both of the pilgrims and those permanently stationed there; the hermits, the Yatis and the Vanīs (forest dwellers) along with their disciples and pupils.

Maṇḍapas, besides serving this sacred purpose had, as detached buildings of Hindu Temple, been serving secular purpose als from times immemoral. Dance, drama, music, gambling and so many other sources of recreation and enjoyment took place in these Maṇḍapas.

Maṇḍapa (मण्डप, “hall”) refers to a common concept found in the ancient Indian “science of architecture” (vāstuvidyā).—Maṇḍapa is an open pillared hall for public events, including rituals, discourses or art performances.

Maṇḍapa (मण्डप).—Halls of the temple, often with many pillars. They are one or more entrance porches or halls that lead to the vimana or inner sanctum.

Maṇḍapa (सुभद्र) refers to a “halls attached to the temple”, according to the Matsya-purāṇa (verses 270.1-30). The Matsyapurāṇa is one of the eighteen major purāṇas dating from the 1st-millennium BCE.

There are 27 varieties of maṇḍapa mentioned:

Accordingly (verse 270.15-17), “These maṇḍapas (e.g., subhadra) should be either made triangular, circular, octagonal or with 16 sides or they are square. They promote kingdoms, victory, longevity, sons, wife and nourishment respecitvely. Temples of other shape than these are inauspicious.”

Maṇḍapa (मण्डप) the Erection of maṇḍapa is the name of preliminary rite of Śaktism mentioned, for example, in the Śāradātilaka-tantra III-V.— A beautiful square maṇḍapa is built on smooth ground on an auspicious day with the recitation of mantras. It should measure five, seven or nine hastas on each Bide. It consists of sixteen pillars, of which four pillars, each eight hastas in length, should be in the middle and the remaining twelve, each five hastas in length, stand round the maṇḍapa. One fifth of each pillar is buried in the ground. The maṇḍapa is decorated on all sides with coconut leaves and bamboos. The doors are arched. The height of the gate pillars is ordained seven hastas and the circumference ten aṅgulas. Flags are hoisted on all sides and the maṇḍapa is decorated with canopies, garlands, Kuśa grass and such other things. A quadrangular altar is prepared in the middle. It occupies one-third of the total area of the maṇḍapa.

Maṇḍapa (मण्डप) refers to a “(level) canopy”, according to the Ṣaṭsāhasrasaṃhitā, an expansion of the Kubjikāmatatantra: the earliest popular and most authoritative Tantra of the Kubjikā cult.—Accordingly, “One should institute a great sacrifice at times of great fear, [...]. This (great sacrifice) brings every success and is the sure means of getting (whatever) one thinks about. I will tell (you) that clearly as it (truly) is. One should make a level canopy [i.e., maṇḍapa] measuring sixteen (handspans) in a frightening forest, or (beside) a solitary tree or a single beautiful Liṅga, in a temple dedicated to the Mothers, on a battle ground, on a threshing floor, in a house, or (places) that are tranquil, terrifying, or romantic as one pleases. Beautiful with flags and garlands, (it is erected) [i.e., the canopy—maṇḍapa] to (win) victory in battle with the enemy and for other purposes as they arise, each separately”.

Maṇḍapa (मण्डप, “canopy”) refers to one of the layout designs for gardens and orchards mentioned in the Vṛkṣāyurveda: a Sanskrit text by written by Surapāla that deals with agriculture (kṛṣi).—Surapāla’s text mentions 170 species of plants including trees, shrubs and a few herbs, and deals with the laying out gardens and orchards and growing unusual trees. Layouts included designs such as maṇḍapa (canopy).

[«previous (M) next»] — Mandapa in Shilpashastra glossary
Source: Shodhganga: The significance of the mūla-beras (śilpa)

Maṇḍapa (मण्डप) refers to the “various columned halls” of the Hindu temple.—The Hindu temple displays sculptures on the outer surface, the maṇḍapas (the various columned halls) and the prāsāda (a three-storeyed palace, a complete solid mass, on whose multi-buttressed walls the images are displayed), in which the innermost sanctuary or the garbhagṛha is located. The garbhagṛha or the womb cell is a small, dark, cubical chamber even in the largest temples. The divine symbol or the deity, invariably carved out of stone, is installed in the garbhagṛha. The door of this cell usually faces the east.

In front of the doorway is the rectangular chamber which is called the antarāla or vestibule. The vestibule is the intermediate chamber between the garbhagṛha and the pillared hall called the maṇḍapa. Entrance to the maṇḍapa is by a porch called the ardha-maṇḍapa (the hall leading to the inner sanctum sanctorum). In a fully formed temple there may be a transept on each side of the central hall known as the mahāmaṇḍapa. All the principal parts of this structure are crowned by pyramidal towers. The tallest is the tower on the sanctum and the shortest is the one on the porch. All round the sanctum is a passage meant for circumambulation by the devotees. The mukha-maṇḍapa is the front hall in front of the shrine.

Maṇḍapa (मण्डप, “pavilion”) is a word commonly used in the Ajantā caves: an archaeologically important site in terms of ancient Buddhism.—The word ‘maṇḍapa’—literally, a ‘pavilion’—as mentioned in the inscriptions of caves 16, 20, etc. meant a pavilion, secular or sacred. Since the Buddha frequently sat in a maṇḍapa—as depicted in Buddhist literature, seen in Ajantā paintings, and evident in the architectural basis of the Ajantā caves that follows the idea of the maṇḍapa—the word gradually appears to have acquired the connotation of a Buddha temple. Perhaps, this is the reason why the caves with a shrine have been called maṇḍapas in inscriptions.

Maṇḍapa.—(IE 8-3), customs house; Marāṭhī māṇḍavī, from Sanskrit maṇḍapikā; explained by some as ‘a market place’ (Hindī maṇḍī); but Hindī maṇḍī seems to be derived from the same word because the toll-stations were often situated in market- places. (BL), name of a structure in front of a temple. (LL), a porch or hall. (CII 4), the hall in a temple. (CII 4), a temple. (EI 31), a temple or public building. Cf. vaiccamudu-maṇḍapa (SITI), kitchen; same as maḍaip- paḻḻi. Cf. vakkāṇikku-maṇḍapa (SITI), hall where disputations in the śāstras are held. Cf. śanivāra-maṇḍapa. Note: maṇḍapa is defined in the “Indian epigraphical glossary” as it can be found on ancient inscriptions commonly written in Sanskrit, Prakrit or Dravidian languages.

maṇḍapa (मंडप).—m (S) An open shed or hall adorned with flowers and erected on festive occasions, as at marriages &c.: also an arched way of light sticks for the vine &c. to climb and overspread. 2 An open building consecrated to a god. 3 fig. A canopy of clouds. Ex. pāvasānēṃ maṃ0 ghātalā.

maṇḍapa (मंडप).—m A pavilion. A shed or awning for a marriage. A bower.

4) A building consecrated to a deity.

Maṇḍapa is a Sanskrit compound consisting of the terms maṇḍa and pa (प).

(-paḥ-paṃ) 1. A temporary building, an open shed or hall, adorned with flowers and erected on festival occasions, as in marriages, &c. 2. An open temple or building consecrated to a deity. 3. A bower. 4. A pavilion. E. maṇḍa ornament, and pā to preserve, aff. ka; or maḍi-kapn .