Navaratri means something in Hinduism, Sanskrit, the history of ancient India. If you want to know the exact meaning, history, etymology or English translation of this term then check out the descriptions on this page. Add your comment or reference to a book if you want to contribute to this summary article. 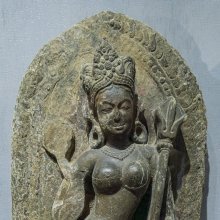 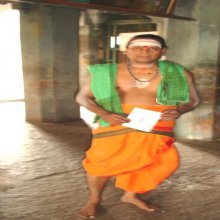 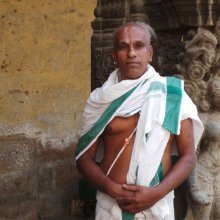 Navarātrī (नवरात्री).—Navarātripūjā (nine nights' worship) is done to goddess Durgā. Though this is observed throughout the whole of India, it is more prominent in North India than anywhere else. (To know the details regarding the origin of this worship, see under Sudarśa, Śaśikalā and Vijayadaśamī).

As ordained in the Vedas, the Nine nights' worship is to be made in the seasons of spring and autumn. These two seasons are called Kāladaṃṣtrās (the tusks of seasons). Diseases and deaths occur in these seasons in excess, and so it is ordained that this fast and worship should be conducted in the months of Meḍam (Meṣa) and Tulām.

Vyāsa has ordered that navarātri worship should be conducted as follows. The things necessary for the worship and oblations should be collected on the new moon day. Only clarified butter could be eaten on that day. An open temple should be erected with pillars and flag-posts in an open flat place which is pure. It will be good if the shed has a circumference of sixteen cubits. There should be sixteen pillars. The shed should be floored with the mixture of cowdung and white clay. In the middle of the shed there must be a dais having a height of one cubit and a circumference of four cubits. This is the place for the seat. The shed and the dais should be decorated.

The throne placed on the dais must be covered with a white silk and Devī (goddess) should be consecrated on it. A calm Brahmin should read the Vedas and at that time the worship of the goddess should begin. This worship will continue for nine days. Another ritual of this 'navarātripūjā' is the worship of virgins. (See under Kumārīpūjā)

Navarātri (नवरात्रि) is a great, nine day, festival in India, in which goddess Durgā is worshiped in her nine different manifestations. The word Navarātri literally means nine nights in Sanskrit, nava meaning nine and rātri meaning nights. During these nine nights and ten days of devotion, nine different forms of Durgā are worshiped. The 10th day is commonly referred to as Vijayā-daśamī or Dussehra. These nine forms of Durgā are worshipped during the Navarātri.

Navaratri ot the holy nine nights is a period of festivity observed by the Hindus for nine days or rather nights after sunset in temples in the month of Purattasi corresponding to the English month September-October, commencing on the first day in the bright fortnight of the monthevery year. The object or aim with which it is observed is said to be to propitiate the Goddess symbolising every possible kind of energy in the universe, with a view to obtain perpetual happiness and prosperity.

A noteworthy feature in the observance of the Navaratri Vratha is that virgins, ranging from the age of two to ten, are especially noticed with gifts of saffron, vermilion flowers, sandal paste, fruits, etc., after the Gauripuja. The reason for this is obvious. Nine Saktis or forces of Devi are recognised. These are personified and given the names of (1) Kumari, (2) Trimurti, (3) Kalyani, (4) Rohini, (5) Kalika, (6) Chandika, (7) Sambavi, (8) Durga and (9) Subhadra.

The Navaratri festival is also known as the Dasara festival. On the ninth and the last day of this period, the goddess Saraswati is worshipped. The worship goes by the name Saraswathi Puja. It is interesting to note that this puja is performed in honour of the element Vayu (air). The goddess is installed in a pot called ‘gadam’.

Navaratri (नवरात्रि): A Hindu festival of worship and dance. The word Navaratri literally means nine nights in Sanskrit. During these nine nights and ten days, nine forms of Shakti/Devi are worshipped.

Navaratri refers to one of the festivals of the Nambutiris. Navaratri refers to the first nine days of Asvayuja are devoted to this festival in honour of Durga. The Nambutiri people form the socio-spiritual aristocracy of Malabar, and, as the traditional landlords of Parasu Rama’s land, they are everywhere held in great reverence.

Navarātri.—(EI 11, 25; CII 4), the festival of Durgā; Āśvina-sudi 1 to 9. Note: navarātri is defined in the “Indian epigraphical glossary” as it can be found on ancient inscriptions commonly written in Sanskrit, Prakrit or Dravidian languages.