Anugrahamurti means something in Hinduism, Sanskrit. If you want to know the exact meaning, history, etymology or English translation of this term then check out the descriptions on this page. Add your comment or reference to a book if you want to contribute to this summary article. 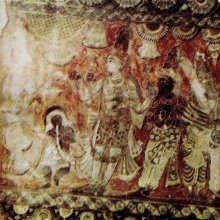 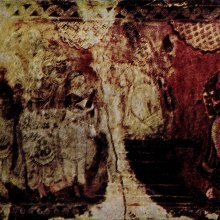 Anugrahamūrti (अनुग्रहमूर्ति) is a sculpture found at the temple of Vijayeśvara, at the western side, northern karṇakūṭa .—This is one of the most beautiful and rare images of Śiva blessing one of his devotees. Śiva is standing and an emaciate dwarf personage holds firmly the right leg of the god reminding us the story of Mārkaṇḍeya or Śveta. But in the case of these two devotees they are shown embracing the Liṅga and not God Śiva. Śiva’s right hand is on the head of the devotee. The ribs of the dwarf are seen like in the figure of Karaikālammeyār, great devotee of Śiva. One can count his ribs. The dwarf is a male. Śiva’s hand on the head makes us to think of the story of Caṃḍikeśvara. But the hand does not show the gesture of benediction.

Śiva looks so peaceful as if satisfied with the devotion of his devotee and blesses him. Śiva is standing in tribhaṅga, “three bends” with his head tilted to the left, hips also to the left and in cross feet like the pose of Kṛṣṇa. Śiva is holding a snake in the upper right hand, flag staff in the upper left. The lower left is raised and the palm is in the gesture of sarpaśīrṣa, snake-hood, the lower right on the head of the devotee.