Vali means something in Hinduism, Sanskrit, Buddhism, Pali, the history of ancient India, Marathi, Jainism, Prakrit, Hindi, biology. If you want to know the exact meaning, history, etymology or English translation of this term then check out the descriptions on this page. Add your comment or reference to a book if you want to contribute to this summary article. 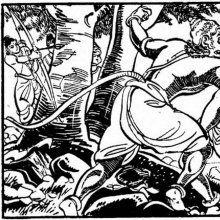 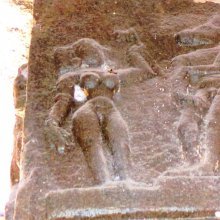 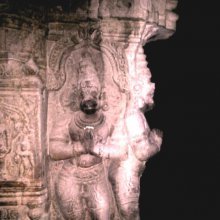 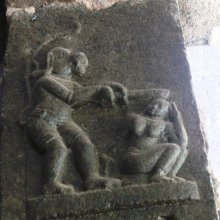 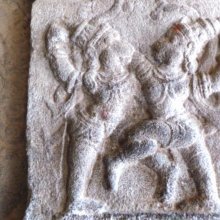 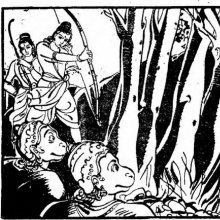 1a) Vāli (वालि).—A son of Virajā (the daughter of Ṛkṣa) and Mahendra. Crowned king of Kiṣkinda and ruled with Sugrīva; wife Tārā and son Angada: crossed the seas, vanquished Rāvaṇa at Puṣkara, and agreed to be his ally on his request; performed Vedic yajñas, learned in the Vedic lore; applauded by Nārada;1 killed by Rāma.2

Vāli (वालि).—Name of a monkey who was the son of Indra, the King of heaven, and elder brother of Sugrīva, the monkey king in the epic Rāmāyaṇa.

Vali (वलि, “wrinkle”) refers to one of the fifteen aspects of gamaka (embellishments, ornamentation) that are used in Indian classical music (gāndharva), according to the Saṅgītaśiromaṇi 14.83-94. These gamakas refer to essential elements of the sthāyas (technical phrases) of rāgas (melodic modes). Accordingly, “a vribrato (kampana) rendered in various speeds is considered to be a vali”.

Valī (वली) refers to “wrinkles” and is one of the various diseases mentioned in the 15th-century Yogasārasaṅgraha (Yogasara-saṅgraha) by Vāsudeva: an unpublished Keralite work representing an Ayurvedic compendium of medicinal recipes. The Yogasārasaṃgraha [mentioning valī] deals with entire recipes in the route of administration, and thus deals with the knowledge of pharmacy (bhaiṣajya-kalpanā) which is a branch of pharmacology (dravyaguṇa).

Vali was the king of monkeys. He is said to be the son of the sage Kashyapa. He had obtained a boon that he would get half of his opponent's strength in combat. This made him invincible in fair combat. He fell out with his younger brother Sugreeva, who sought the help of Rama in killing his brother.

According to the promise made to Sugreeva, Rama killed Vali with an arrow, fired from a hidden spot when Vali was fighting with Sugreeva. This way Rama avoided losing half his strength, as he was hidden from Vali.

Vālī (वाली): One of five great monkeys in Ramayana, a son of Indra, Monkey-king of Kishkindha and the cruel elder brother of Sugriva. He was killed by Rama.

Vāḻi.—(SII 2), ear-ring. Note: vāḻi is defined in the “Indian epigraphical glossary” as it can be found on ancient inscriptions commonly written in Sanskrit, Prakrit or Dravidian languages.

Vali in India is the name of a plant defined with Setaria verticillata in various botanical sources. This page contains potential references in Ayurveda, modern medicine, and other folk traditions or local practices It has the synonym Panicum respiciens (Hochst. ex A. Rich.) Hochst. ex Steud. (among others).

If you are looking for specific details regarding Vali, for example chemical composition, side effects, diet and recipes, pregnancy safety, extract dosage, health benefits, have a look at these references.

vaḷī (वळी).—f (vaḷaṇēṃ) A stuffed roll or pad placed across and underneath the packsaddle. 2 A roll, a thing rolled up. 3 Uniting threads together. A term of the loom. See sāndhaṇī.

3) The ridge of a thatched roof.

4) A line made on the body with fragrant unguents.

Vāli (वालि).—Name of a celebrated monkeychief, who was slain by Rāma at the desire of Sugrīva, his younger brother. [He is represented as a very powerful monkey, and is said to have placed under his arm-pit even Rāvaṇa when he went to fight with him. During his absence from Kiṣkindhā to slay the brother of Dundubhi, Sugriva usurped the throne considering him to be dead, but when Vāli returned, he had to run away to Ṛiṣyamūka. Tārā, wife of Sugrīva, was seized by Vāli, but she was restored to her husband when Rāma slew him.]

Vali (वलि).—f. (-liḥ or lī) 1. A line or streak made with fragrant unguents on the person. 2. Natural line or folds of skin, a wrinkle m.

2) [v.s. ...] a line or stroke made with fragrant unguents on the person, [cf. Lexicographers, esp. such as amarasiṃha, halāyudha, hemacandra, etc.]

Vali (वलि):—(liḥ) 2. f. A streak made with unguents; fold or wrinkle; an offering to the spirits of air.

Vali (वलि) in the Sanskrit language is related to the Prakrit words: Vali, Valī, Vāli.

1) Vali (वलि) in the Prakrit language is related to the Sanskrit word: Vali.

2) [noun] any of the three folds of the skin above the navel of a woman.

3) [noun] a form of a moving ridge or swell on the surface of a water body, caused by the internal or external disturbance; a wave.

4) [noun] the surging or progressing movement of a wave on the surface of water in the sea.

5) [noun] a thin mark joining two points on the same plane; a line.

6) [noun] a plucking of a string of a musical instrument, with a jerking movement.

7) [noun] a regulated, oscillation of a musical note, to give a more aesthetic effect.

Vali (ವಲಿ):—[noun] a time or opportunity for action which comes in due rotation or order to each of a number of persons, animals, etc.; a time; a turn.

2) [noun] any of the three folds of the skin above the navel of a woman.

3) [noun] a form of a moving ridge or swell on the surface of a water body, caused by the internal or external disturbance; a wave.

4) [noun] the surging or progressing movement of a wave on the surface of water in the sea.

5) [noun] a thin mark joining two points on the same plane; a line.

6) [noun] a plucking of a string of a musical instrument, with a jerking movement.

7) [noun] a regulated, oscillation of a musical note, to give a more aesthetic effect.

1) [noun] a character in Rāmāyaṇa, a strong and powerful king of Kiṣkindhe.

1) [adjective] not yielding to argument, persuasion or entreaty; obstinate; adamant.

Verse 3.4.330 < [Chapter 4 - Descriptions of Śrī Acyutānanda’s Pastimes and the Worship of Śrī Mādhavendra]

Verse 3.3.261 < [Chapter 3 - Mahāprabhu’s Deliverance of Sarvabhauma, Exhibition of His Six-armed Form, and Journey to Bengal]

Verse 2.26.89-094 < [Chapter 26 - Descriptions of the Mercy Bestowed on Śuklāmbara and Vijay and the Lord’s Desire to Accept Sannyāsa]

Vali and the Dwarf Incarnation