Yuga means something in Buddhism, Pali, Hinduism, Sanskrit, the history of ancient India, Marathi, Hindi. If you want to know the exact meaning, history, etymology or English translation of this term then check out the descriptions on this page. Add your comment or reference to a book if you want to contribute to this summary article. 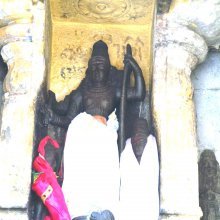 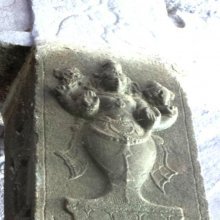 Yuga (युग) refers to “one age within the cycle of the universal four ages, named Satya, Tretā, Dvāpara and Kali”. (cf. Glossary page from Śrīmad-Bhagavad-Gītā).

Yuga (युग) is a Sanskrit technical term referring a “piece of wooden pole”, of a chariot (yāna). The word is used throughout Dharmaśāstra literature such as the Manusmṛti. (See the Manubhāṣya, verse 8.291-292)

1a) Yuga (युग).—The intervening time between one yuga-sandhyapūrva and sandhyāṃśa; four in number; Kṛta, Treta, Dvāpara and Kali. The extent is of 12,000 years of celestial measure; the duration of the yugas includes sandhya, 12,000 divine years, 1,000 caturyugas make a day of Brahmā.1 A yugam of five years, commencing with śravaṇa and ending with dhaniṣṭhā nakṣatra—the five years are respectively Agni, Sūrya, Soma, Vāyu and Rudra; consists of Samvatsara, Parivatsara, Idvatsara, Anuvatsara and Vatsara; revolves like the wheel owing to the movement of the Sun.2 Social conditions in;3 of Śaptaṛṣis.4

1b) A measurement equal to four hastas or dhanus; equal to a dhanurdaṇḍa.*

1) Yuga (युग) refers to 43,20,000 Solar years, according to the Bṛhatsaṃhitā (chapter 2), an encyclopedic Sanskrit work written by Varāhamihira mainly focusing on the science of ancient Indian astronomy astronomy (Jyotiṣa).—Accordingly, “We shall now proceed to give a brief description of (the qualifications of) a jyotiṣaka. [...] He must have a correct, knowledge of a yuga (43,20,000 Solar years), varṣa (a solar year), āyana (6 solar months), ṛtu (2 solar months), māsa (a solar month), pakṣa (15 solar days), ahorātra (a solar day), yama (one-eighth of a solar day), muhūrta (one-thirtieth of a solar day), nāḍī (one-sixtieth of a solar day or 24 minutes), vināḍi (one sixtieth of a nāḍī or 24 seconds), prāṇa (4 seconds) truṭi (33, 75th of a second) and parts of a truṭi and other divisions of time and also of divisions of space”.

2) Yuga (युग) refers to a “period of five years”, according to the Bṛhatsaṃhitā (chapter 2).—Accordingly, “We shall now proceed to give a brief description of (the qualifications of) a jyotiṣaka. [...] He must have a clear knowledge of the causes of Solar, Savana, Siderial and Lunar months as well as of intercalary lunations and intercalary days [i.e., avama]. He must have a knowledge of the beginning and end of Śaṣṭyābda (a cycle of 60 years) [Ṣaṣṭyabda?], a Yuga (5 years), Varṣa (a year), Māsa (a month), Thina (a day) and Horā (an hour) and of their lords”.

Yuga (युग).—1. A calendar intercalation cycle. 2. A cosmological time interval, especially a mahāyuga. 3. A period of 4,320,000 years. Note: Yuga is a Sanskrit technical term used in ancient Indian sciences such as Astronomy, Mathematics and Geometry.

2) Yuga (युग) in the Rigveda frequently denotes a ‘generation’; but the expression daśame yitge applied to Dīrghatamas in one passage must mean ‘tenth decade’ of life.

Yuga (युग) in Hindu philosophy is the name of an epoch or era within a four age cycle. According to Hindu cosmology, life in the universe is created and destroyed once every 4.1 to 8.2 billion years, which is one full day (day and night) for Brahma. The lifetime of a Brahma himself may be 311 trillion and 40 billion years. The cycles are said to repeat like the seasons, waxing and waning within a greater time-cycle of the creation and destruction of the universe. Like Summer, Spring, Winter and Autumn, each yuga involves stages or gradual changes which the earth and the consciousness of mankind goes through as a whole. A complete yuga cycle from a high Golden Age, called the Satya Yuga to a Dark Age, Kali Yuga and back again is said to be caused by the solar system's motion around another star.

Yuga (युग) or Caturyuga refers to the “four ages” as defined in the Dharma-saṃgraha (section 88):

The Dharma-samgraha (Dharmasangraha) is an extensive glossary of Buddhist technical terms in Sanskrit (e.g., yuga). The work is attributed to Nagarjuna who lived around the 2nd century A.D.

Yuga (युग) refers to the tradition where historical time is divided into four ages (yuga), viz. the Kṛta (or Satya), Tretā, Dvāpara and Kali. This system is the peculiarity of India alone. Kṛta age ended with the destruction of the Haihayas by Rāma Jāmadagnya; Tretā began with Sagara and ended with Rāma Dāśarathi’s consecration at Ayodhyā and closed with the Bhārata war; the Kali began immediately after the passing away of the great heroes of the Bharata war, Kṛṣṇa and the Pāṇḍavas and with the changes in the political condition of Northern India that ensued.

Yuga is the name of a land granted by king Subhikṣa (for the merit and fame of his parents and himself) as recorded in the “Plate of Subhikṣarājadeva” (10th century A.D.). It measured one Droṇavāpa. Yuga was dedicated to the goddess Nārāyaṇa-bhaṭṭāraka (Nārāyaṇa) who is said to have been installed on the bank of the Viṣṇugaṅgā.

This inscribed copper plate (mentioning  Yuga) is preserved in the temple of Yogabadarī (one of the Pañcabadarī) at Pāṇḍukeśvar (Pāṇḍukeśvara). It records the grant of many pieces of land, situated in the viṣayas (districts) of Ṭaṅgaṇāpura and Antaraṅga made by king Subhikṣa in favour of three deities.

Yuga.—(IE 7-1-2), ‘four’; rarely, 2 or 12. Note: yuga is defined in the “Indian epigraphical glossary” as it can be found on ancient inscriptions commonly written in Sanskrit, Prakrit or Dravidian languages.

Yuga or Yugā.—(EI 1), meaning doubtful; cf. yugā in the sense of ‘a voucher’. Note: yuga is defined in the “Indian epigraphical glossary” as it can be found on ancient inscriptions commonly written in Sanskrit, Prakrit or Dravidian languages.

Yugā.—(CII 4), a voucher. Note: yugā is defined in the “Indian epigraphical glossary” as it can be found on ancient inscriptions commonly written in Sanskrit, Prakrit or Dravidian languages.

yuga (युग).—n An age; the period comprising the four ages. A yoke. A pair.

3) A couple of stanzas forming one sentence; see युग्म (yugma).

4) An age of the world; (the Yugas are four:-kṛta or satya, tretā, dvāpara and kali; the duration of each is said to be respectively 1,728,; 1,296,; 864.; and 432, years of men, the four together comprising 4,32, years of men which is equal to one Mahāyuga q. v.; it is also supposed that the regularly descending length of the Yugas represents a corresponding physical and moral deterioration in the people who live during each age, Krita being called the 'golden' and Kali or the present age the 'iron' age); धर्मसंस्थापनार्थाय संभवामि युगे युगे (dharmasaṃsthāpanārthāya saṃbhavāmi yuge yuge) Bg.4.8; युगशतपरिवर्तान् (yugaśataparivartān) Ś7.34.

7) An expression for the number 'four', rarely for 'twelve',

9) A measure of length equal to four Hastas.

11) Name of a particular configuration of the moon.

Yuga (युग).—nt. (Pali id., I believe, in Sn 834 dhonena yugaṃ samāgamā, you have come under subjugation by the Pure, i.e. by Buddha; otherwise [Pali Text Society’s Pali-English Dictionary], Chalmers), yoke, in fig. sense of subjugation: yuga-m-antarasmi (for yugāntare) sthita māru Lalitavistara 338.11 (verse), Māra, abiding under (lit. in the middle of) the yoke (being subjugated).

10) [v.s. ...] Name of a [particular] position or configuration of the moon, [Varāha-mihira’s Bṛhat-saṃhitā]

11) [v.s. ...] of a [particular] Nābhasa constellation (of the class called Sāṃkhya-yoga, when all the planets are situated in two houses), [ib.]

12) [v.s. ...] of a double Śloka or two Ślokas so connected that the sense is only completed by the two together, [Rājataraṅgiṇī]

Yuga (युग) in the Sanskrit language is related to the Prakrit word: Juga.

Yuga (युग) [Also spelled yug]:—(nm) an age, epoch; era; period; times; one of the four ages-viz [satayuga, tretā, dvāpara, kaliyuga]of the world according to Indian tradition; a pair, couple; -[cetanā] contemporary consciousness; •[saṃpanna] conscious of the times; ~[dharma] contemporaniety, conformation to the times; ~[pat] simultaneous(ly); ~[puruṣa] man of the age; —[yuga] (for) ages, (for) all times; ~[la] a pair, couple; both, the two; ~[la-gāna/~la-gīta/~labaṃdī] duet; —[bīta jānā] ages to be past, a long time to roll by.

1) [noun] wooden crosspiece fastened over the necks of two oxen etc. and attached to the plough or cart to be pulled; a yoke.

2) [noun] the forepart of the beam of a cart (to which a yoke is fastened).

5) [noun] any of the four ages of the world, of long mundane period of years.

7) [noun] the distance between the tips of middle fingers of both the hands when stretched apart, a unit of linear measure equal to four cubits.

8) [noun] either of the two fleshy, rounded parts at the back of the hips; the buttock.

Search found 93 books and stories containing Yuga, Yugā; (plurals include: Yugas, Yugās). You can also click to the full overview containing English textual excerpts. Below are direct links for the most relevant articles:

Chapter 56 - A description of the four yogas—Origin of evil

Chapter 31 - Narration of the four Yugas: castes and stages of life < [Section 2 - Anuṣaṅga-pāda]