Kumbha means something in Buddhism, Pali, Hinduism, Sanskrit, Jainism, Prakrit, the history of ancient India, Marathi. If you want to know the exact meaning, history, etymology or English translation of this term then check out the descriptions on this page. Add your comment or reference to a book if you want to contribute to this summary article. 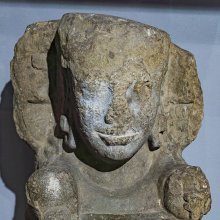 Kumbha (“pot”) refers to one of the several “attributes” (āyudha) or “accessories” of a detiy commonly seen depicted in Hindu iconography, defined according to texts dealing with śilpa (arts and crafs), known as śilpaśāstras.—The śilpa texts have classified the various accessories under the broad heading of āyudha or karuvi (implement), including even flowers, animals, and musical instruments. The other miscellaneous articles found as attributes in the hands of the deities are, for example, Kumbha.

Kumbha is found in another list in the Samarāṅgaṇasūtradhāra, chapter 60, where it is mentioned in a list of thirty-six Prāsādas (temples) having activities of the townsmen entailing Sādhārās.

Kumbha is also listed in the Īśānaśivagurudevapaddhati which features a list of 52 temple types. This list represents the classification of temples in South-India.

Kumbha is also listed in the Matsyapurāṇa which features a list of 20 temple types. This list represents a classification of temples in Nort-India.

2) Kumbha (कुम्भ) refers to “capital”. It is sculptured as a part of the pillar (stambha).

3) Kumbha (कुम्भ) corresponds with the Aquarius zodiac sign and refers to the eleventh of twelve rāśi (zodiacal sign), according to the Mānasāra. Rāśi is one of the three alternative principles, besides the six āyādiṣaḍvarga, used to constitute the “horoscope” of an architectural or iconographic object. Their application is intended to “verify” the measurements of the architectural and iconographic object against the dictates of astrology that lay out the conditions of auspiciousness.

The particular rāśi (eg., kumbha) of all architectural and iconographic objects (settlement, building, image) must be calculated and ascertained. This process is based on the principle of the remainder. An arithmetical formula to be used in each case is stipulated, which engages one of the basic dimensions of the object (breadth, length, or perimeter/circumference). All twelve rāśis, except the eighth (vṛścika) are auspicious.

Kumbha (कुम्भ).—One of the components of a kumbhapañjara (a decorative motif);—Kumbha is the pot base, which is generally placed on a pedestal, which may be circular or square and may be ornate or non-ornate. The kumbha is generally globular and some times it is cuboid with its two comers ridged and sides rounded. The body of the pot is often decorated with a fillet, ratnapaṭṭika, puṣpapaṭṭika, vajrapaṭṭika, etc.

Kumbha (कुम्भ) is the name of a mountain situated at lake Aruṇoda and mount Mandara, according to the Varāhapurāṇa chapter 75. The Mandara mountain lies on the eastern side of mount Meru, which is one of the seven mountains located in Jambūdvīpa, ruled over by Āgnīdhra, a grandson of Svāyambhuva Manu, who was created by Brahmā, who was in turn created by Nārāyaṇa, the unknowable all-pervasive primordial being.

2) Kumbha (कुम्भ).—Son of Kumbhakarṇa, whose wife Vajrajvālā bore him two sons called Kumbha and Nikumbha. Both of them were very powerful, and Kumbha, in the Rāma-Rāvaṇa war defeated the army of monkeys on various occasions. Many of the ministers of Sugrīva tried to defeat Kumbha. Aṅgada, son of Bāli also could not stand up to him. Then Sugrīva fought against Kumbha and flung him into the sea when the water in it rose up to the level of mount Vindhya. Kumbha came ashore from the sea roaring but was fisted to death by Sugrīva. (Vālmīki Rāmāyaṇa, Yuddha Kāṇḍa, Canto 76).

1f) A water vessel, being an adjunct of vratas to be given as gift.*

Kumbha (कुम्भ) is a name mentioned in the Mahābhārata (cf. I.59.19, I.65) and represents one of the many proper names used for people and places. Note: The Mahābhārata (mentioning Kumbha) is a Sanskrit epic poem consisting of 100,000 ślokas (metrical verses) and is over 2000 years old.

Kumbha (कुम्भ) is a Sanskrit word referring to a “pitcher”.

Kumbha (कुम्भ) is the name of a Kṣetrapāla (field-protector) and together with Cāmuṇḍā Devī they preside over Pauṇḍravardhana: one of the twenty-four sacred districts mentioned in the 9th century Vajraḍākatantra (chapter 18). Their weapon is the khaṭvāṅga. A similar system appears in the tradition of Hindu Tantrims, i.e., in the Kubjikāmatatantra (chapter 22), which belongs to the Śākta sect or Śaivism.

Kumbha (कुम्भ) is the name of a Vīra (hero) who, together with the Ḍākinī named Kumbhī forms one of the 36 pairs situated in the Cittacakra, according to the 10th century Ḍākārṇava chapter 15. Accordingly, the cittacakra refers to one of the three divisions of the nirmāṇa-puṭa (‘emanation layer’), situated in the Herukamaṇḍala. The 36 pairs of Ḍākinīs and Vīras [viz., Kumbha] are black in color; they each have one face and four arms; they hold a skull bowl, a skull staff, a small drum, and a knife.

1) Kumbha (कुम्भ) is the father of Mallinātha, the nineteenth of twenty-four Tīrthaṅkaras in Janism, according to the Ācāradinakara (14th century work on Jain conduct written by Vardhamāna Sūri). A Tīrthaṅkara is an enlightened being who has conquered saṃsāra (cycle of birth and death), leaving behind him a path for others to follow.

The wife of Kumbha is Prabhāvatī. It is an ancient Jain practice to worship the Tīrthaṅkara’s parents in various rites, such as the pratiṣṭhāvidhi.

2) Kumbha (कुम्भ).— The kumbhas are a group of celestial beings living in the lower regions of adholoka (lower world) according to Jaina cosmology. Adholoka is made up of seven regions and offers residence to the infernal beings existing within these lands.

Kumbha (कुम्भ) participated in the war between Rāma and Rāvaṇa, on the side of the latter, as mentioned in Svayambhūdeva’s Paumacariu (Padmacarita, Paumacariya or Rāmāyaṇapurāṇa) chapter 57ff. Svayambhū or Svayambhūdeva (8th or 9th century) was a Jain householder who probably lived in Karnataka. His work recounts the popular Rāma story as known from the older work Rāmāyaṇa (written by Vālmīki). Various chapters [mentioning Kumbha] are dedicated to the humongous battle whose armies (known as akṣauhiṇīs) consisted of millions of soldiers, horses and elephants, etc.

Kumbha (कुम्भ) is the father of Mallinātha: the nineteenth of twenty-four Tīrthaṃkaras or Jinas, commonly depicted in Jaina iconography.—Mallinātha’s father was the king of Mithila in Vaṅga (Bengal) and belonged to the Ikṣvāku race. His name was Kumbha and his queen was called Prajāvatī. According lo the Śvetāmbara sect, Mallinātha was a woman. [...] The Jina acquired the name of Malli as his mother longed for fragrant Malli (a kind of Jasmine) flowers while bearing him in the womb.

Kumbha.—(EI 5), the pinnacle of a temple; same as kalaśa. See also kumbhaka. Note: kumbha is defined in the “Indian epigraphical glossary” as it can be found on ancient inscriptions commonly written in Sanskrit, Prakrit or Dravidian languages.

kumbhā (कुंभा).—m (kumbha S) The name of a bird. 2 A wild tree. Its leaves are thick, and useful for summer-heads, iralēṃ &c., and rope is made from its bark. 3 A low, spreading, milky bush. The flowers are offered to Shiva, and leaves are used medicinally. It is the same with dudhāṇī & śētavaḍa or śētāḍa q. v.

5) (In Yoga phil.) Closing the nostrils and mouth so as to suspend breathing.

6) The paramour of a harlot.

7) An urn in which the bones of dead bodies are collected.

8) A kind of heart-disease.

(-mbhaḥ) 1. A small water jar. 2. The frontal globe on the upper part of the forehead of an elephant; there are two of these projection, which swell in the rutting season. 3. A sign of the zodiac, (Aquarius.) 4. A proper name, the nephew of Ravana considered as a Rakshasa or demon. 5. The paramour of a harlot, a bully, a flash or fancy man. 6. (In Yoga phil) A religious exercise, closing the nostrils and mouth so as to suspend breathing. 7. A measure of grain equal to twenty Dronas, a little more than three bushels and three gallons, or a Comb: some make it to Dronas or sixty-four Seers. n.

(-mbhaṃ) 1. A fragrant resin or the plant which bears it, (Bdellium.) 2. A plant commonly Teori: see trivṛt. f. (-mbhī) 1. A pot, an earthen cooking vessel, a small jar. 2. Kayap'hal, a small tree, the seeds of which are used in medicine: see kaṭphala 3. An aquatic plant, (Pistia stratiotes.) 4. Trumpet flower, (Bignonia suave-olens.)

Kumbha (कुम्भ).—[masculine] jar, pot (also kumbhī), funeral urn; [dual] the two frontal globes of an elephant, which swell in the time of rutting.

4) a measure of grain (equal to twenty Droṇas, a little more than three bushels and three gallons; commonly called a comb; some make it two Droṇas or sixty-four Seers), [Manu-smṛti viii, 320; Hemādri’s Caturvarga-cintāmaṇi]

5) the frontal globe or prominence on the upper part of the forehead of an elephant (there are two of these prominences which swell in the rutting season), [Mahābhārata; Bhartṛhari] etc.

8) the root of a plant used in medicine

9) a religious exercise, viz. closing the nostrils and mouth so as to suspend breathing, [cf. Lexicographers, esp. such as amarasiṃha, halāyudha, hemacandra, etc.]

10) the paramour of a harlot, bully, flash or fancy man, [cf. Lexicographers, esp. such as amarasiṃha, halāyudha, hemacandra, etc.]

11) Name of a Mantra (pronounced over a weapon), [Rāmāyaṇa i]

14) of the father of the nineteenth Arhat of the present Avasarpiṇī, [Jaina literature]

22) a fragrant resin (guggulu), or the plant which bears it, [cf. Lexicographers, esp. such as amarasiṃha, halāyudha, hemacandra, etc.]

Search found 49 books and stories containing Kumbha, Kumbhā; (plurals include: Kumbhas, Kumbhās). You can also click to the full overview containing English textual excerpts. Below are direct links for the most relevant articles: