Ayudha means something in Hinduism, Sanskrit, Jainism, Prakrit, Buddhism, Pali, Marathi, Hindi. If you want to know the exact meaning, history, etymology or English translation of this term then check out the descriptions on this page. Add your comment or reference to a book if you want to contribute to this summary article.

Alternative spellings of this word include Aayudh. 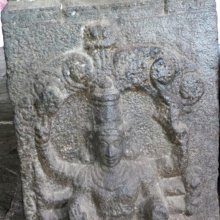 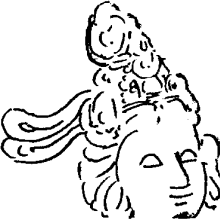 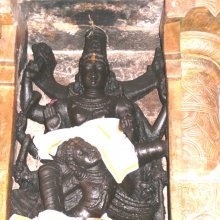 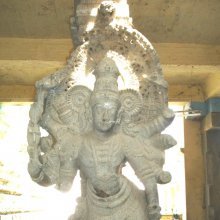 Ayudha generally translates to weapons; but, in shilpa-sastra, the term indicates whatever objects the idol holds in his or her hands. The Ayudhas delineate the nature, character and functions associated with the idol. In a way of speaking, they are the symbols of a symbolism. For instance, Saraswathi holds in her hands a book symbolizing the Vedas and learning; a Kamandala (a water jug) symbolizing smruthi, vedanga and shastras; a rosary symbolizing the cyclical nature of time; and the musical instrument veena symbolizing music and her benevolent nature.

All these objects are not weapons in the conventional sense, but the shilpa employs those as symbols to expand and depict and interpret the nature of the idol and its meaning. Each of these Ayudhas signifies a certain aspect or it stands for a concept. For instance, the mirror signifies a clear mind and awareness; the flag signifies victory or celebration; the Ankusha (goad) signifies exercising control over senses and baser instincts, Damaru in the hands of shiva signifies creation and origin of sound and learning; and, the scepter signifies authority and rule of law.

Ayudha (अयुध) refers to the “weapons” (of the Gods), according to the Śivapurāṇa 2.3.17 (“The dialogue between Indra and Kāmadeva”).—Accordingly, as Brahmā said to Kāma: “[...] Securing a wonderful boon from Brahmā, the great demon Tāraka has become invincible and a pest for everyone. The entire world is harassed by him. Many virtuous rites are destroyed. The gods have become miserable and so also the sages. He had been fought by the gods to the utmost of their ability formerly. But the weapons [i.e., ayudha] of all the gods became quite futile. [...]”.

[«previous (A) next»] — Ayudha in Shilpashastra glossary
Source: Shodhganga: The significance of the mūla-beras (śilpa)

Āyudha (आयुध) refers to the “attributes” or “accessories” of a detiy, as defined in the texts dealing with śilpa (arts and crafs), known as śilpaśāstras.—The technical terms of the attributes (āyudha) relate to the objects which the images of Hindu gods and goddesses are shown as bearing in their hands, such as weapons, musical instruments, animals, and birds. The attributes (āyudha) also relate to the various attitudes in which the hands of images are shown and the postures which the bodies of the images are made to assume. The attributes include the costume, ornaments and head gear in which they are represented. The śilpa texts have classified the various accessories under the broad heading of āyudha or karuvi (implement), including even flowers, animals, and musical instruments.

Āyudha (आयुध) refers to “attributes” or “weapons”, as defined in treatises such as the Pāñcarātra, Pādmasaṃhitā and Vaikhānasa-āgamas, extensively dealing with the technical features of temple art, iconography and architecture in Vaishnavism.

Āyudha (आयुध) refers to the “weapons” (of the Goddesses), according to the Ṣaṭsāhasrasaṃhitā, an expansion of the Kubjikāmatatantra: the earliest popular and most authoritative Tantra of the Kubjikā cult.—Accordingly, “Having (mentally) formed (the twenty-four sacred places) beginning with Aṭṭahāsa and ending with Rājagṛha along with the goddesses with (their) weapons [i.e., āyudha] and accompanied by the guardians, by attending the sacred fields, primary and secondary, and the meeting places, he becomes pure. O dear one, he who is incompetent or careless (but nevertheless) gets up in the morning and recites (this hymn) achieves perfect purity by eulogizing the sacred seats. I will tell (you) that so that (the observance of) the Rule may be purified”.

Ayudha (अयुध) refers to the “weapon-forms (of the deities of the weapons of the Goddesses)”, according to the King Vatsarāja’s Pūjāstuti called the Kāmasiddhistuti (also Vāmakeśvarīstuti), guiding one through the worship of the Goddess Nityā.—Accordingly, “[...] I worship those eight goddesses of speech, Vaśinī and others, whose complexion is red. They carry in their four lovely hands a bow, arrows, a book, and a rosary. May the four deities of the weapons [of the Goddess]—the arrows and others—red in complexion, displaying the gestures of generosity and protection, marked on the head by their own respective weapon-forms (ayudha-devatā), grant me permission [for worship of the Goddess]. [...]”.

1) Āyudha (आयुध) or Āyudhajīvin refers to “artisans”, according to the Bṛhatsaṃhitā (chapter 4), an encyclopedic Sanskrit work written by Varāhamihira mainly focusing on the science of ancient Indian astronomy astronomy (Jyotiṣa).—Accordingly, “If the Moon (candra) should be eclipsed by Ketu she will destroy prosperity, health and plenty. Artisans will perish [i.e., āyudha-jīvin-vināśa] and thieves will suffer greatly. If while the moon is eclipsed, she be crossed by the fall of a meteor, that prince will die in the star of whose nativity the moon then happens to be”.

2) Āyudha (आयुध) (Cf. Āyudhīya) refers to “weapons”, according to the Bṛhatsaṃhitā (chapter 5).—Accordingly, “If the sun and moon should begin to be eclipsed when only half risen, deceitful men will suffer as well as sacrificial rites. [...] If they should be eclipsed when in the sign of Sagittarius (Dhanuṣa), ministers, fine horses, the Videhas, the Mallānas, the Pāñcālas, physicians, merchants and persons skilled in the use of destructive weapons [i.e., viṣama-āyudha-jñā] will perish. If when in the sign of Capricornus (Makara), fishes, the families of ministers, the Cāṇḍālas, skilled magicians, physicians and old soldiers will perish”.

Āyudha (आयुध) refers to the “weapons” or “attributes” (of Svacchanda), according to the Śrīmatottara-tantra, an expansion of the Kubjikāmatatantra: the earliest popular and most authoritative Tantra of the Kubjikā cult. Accordingly, “O goddess, Svacchanda is in the middle, within the abode of the triangle. Very powerful, he has five faces with three times five flaming eyes. [...] O fair lady, my attributes—trident, dagger, sword, the king of the snakes, and rosary—adorn the right (arms). O beloved, a skull, double-headed drum, javelin, noose and goad—(these) are my divine, brilliant and very auspicious weapons [i.e., āyudha] that (are held) in the left (hands). The king of snakes (hangs) on the shoulder and a garland of skulls hangs (from the neck). There is a necklace of scorpions around the throat and the ears are adorned with snakes. [...]”.

Āyudha (आयुध) refers to a “hatchet”, according to the Netratantra of Kṣemarāja: a Śaiva text from the 9th century in which Śiva (Bhairava) teaches Pārvatī topics such as metaphysics, cosmology, and soteriology.—Accordingly, [verse 10.1-7ab, while describing the appearance and worship of Bhairava]—“[...] He] bears a sword and shield, holds a hook and noose. [His] hand[s and posed] in the wish fulfilling and protection [mudrās. He] holds the thunderbolt of a great hero. [He also] holds an axe and a hatchet (āyudha—paraśvāyudhapāṇikam). Having worshipped Bhairava, [the Mantrin] remembers being joined in union [with] him, [in the same way as] dissolution in fire”.

[«previous (A) next»] — Ayudha in Vaishnavism glossary
Source: Brill: Śaivism and the Tantric Traditions (vaishnavism)

[«previous (A) next»] — Ayudha in Jainism glossary
Source: The University of Sydney: A study of the Twelve Reflections

Ayudha (अयुध) refers to a “weapon”, according to the 11th century Jñānārṇava, a treatise on Jain Yoga in roughly 2200 Sanskrit verses composed by Śubhacandra.—Accordingly, “This most powerful [and] cruel death devours against their will the life of those who possess a body that has settled in the middle world, in hell, in the world of Brahmā, in Indra’s abode, in the middle of the ocean, inside the forest, at all quarters of the globe, on a mountain-peak, in a place difficult of access on account of fire, forest, cold, darkness, thunderbolts [and] swords [com.—indra-ayudha—‘Indra’s weapon’], or in [a place] crowded with a troop of ruttish elephants”.

[«previous (A) next»] — Ayudha in Marathi glossary
Source: DDSA: The Molesworth Marathi and English Dictionary

[«previous (A) next»] — Ayudha in Sanskrit glossary
Source: DDSA: The practical Sanskrit-English dictionary

(-dhaḥ) A weapon in general. E. āṅ before yudh to fight, ka aff.

[«previous (A) next»] — Ayudha in Hindi glossary
Source: DDSA: A practical Hindi-English dictionary

1) [noun] an instrument or device of any kind used to injure or kill, as in fighting or hunting; a weapon.

2) [noun] any implement, instrument or utensil held in the hand and used for cutting, hitting, digging, rubbing, etc; a tool.

Search found 15 books and stories containing Ayudha, A-yudha, Ā-yudha, Āyudha; (plurals include: Ayudhas, yudhas, Āyudhas). You can also click to the full overview containing English textual excerpts. Below are direct links for the most relevant articles:

Crowns for Men (b): Karanda-makuta < [Chapter 4 - Material Culture of the People]

2. Vājasaneyi-saṃhitā (b): Rudra’s weapons < [Chapter 2 - Rudra-Śiva in the Saṃhitā Literature]