Tirthankara means something in Jainism, Prakrit, Hinduism, Sanskrit, the history of ancient India, Hindi. If you want to know the exact meaning, history, etymology or English translation of this term then check out the descriptions on this page. Add your comment or reference to a book if you want to contribute to this summary article.

Alternative spellings of this word include Tirthkar. 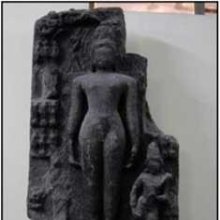 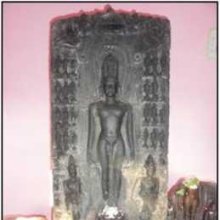 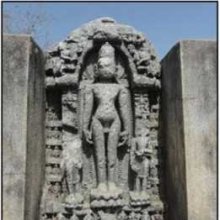 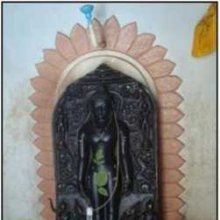 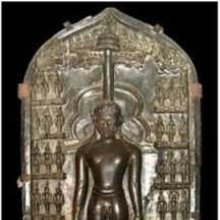 Tīrthaṅkara (ऋषभनाथ).— A tīrthaṅkara is an enlightened being who has conquered saṃsāra (cycle of birth and death), leaving behind him a path for others to follow.

In Jainism, a Tīrthaṅkara is a human being who helps in achieving liberation and enlightenment as an "Arihant" by destroying their soul-constraining (ghati) karmas, became a role-model and leader for those seeking spiritual guidance. Tirthankara is also said to mean “full moon,” a metaphorical reference to Kevala Jnana, the spiritual state achieved by exalted and rare beings. Jain scriptures define the term tirthankara as follows: the contrivance which help us to cross the great ocean of worldly life is called Tirtha and the person who makes that tirtha is known as tirthankara.

The day when a tirthankara was born, got diksha, atteined omniscience and got liberation from the cycle of rebirth, is given in lunar days, so called tithis.

The last Tirtankara known as Mahavira (~ 599 BC), a contemporary of Buddha, and Parshvanatha (~850 BC) found acceptance as historic persons. The appearance of the other 22 predecessors reach for eons.

In Jainism a Tirthankara (he or she) is a liberated soul who has attained omniscience and guides the souls to the opposite shores of the ocean of the world to save them from the cycles of repeated earth existences (rebirth). Tirthankara also are called Jina (vanquisher, victor, conqueror), their followers Jains. To them, a Tirthankara is greater than the gods because he transcends the laws of Space and Time.

Tīrthaṅkara (तीर्थङ्कर).—The 24 Tīrthaṅkara (or Tīrthaṃkara) from Vṛṣabhanātha up to Mahāvīra are arihanta omniscient as well as Tīrthaṅkara. The Tīrthaṅkara and omniscient share same qualities of liberation from bondage and knowledge yet are different. Tīrthaṅkara are the reformers of three worlds. They are capable of self-welfare as well as the welfare of others. They are the benefactors of gods, demons, humans, animals and birds.

Tīrthaṅkara (तीर्थङ्कर) refers to “ford-maker” according to the Tattvārthasūtra chapter 6.—Who is a ford-maker (tīrthaṅkara)? An omniscient that organizes propagates and preaches the creed (tīrtha) is called fordmaker. He takes the followers from the shores of ignorance to the shores of enlightenment. How many auspicious events in life are there of a fordmaker (tīrthaṅkara)? They can have two, three or five auspicious events (kalyāṇakas) in their life.

Tīrthaṅkara.—(CII 3; EI 9); epithet of the 24 great leaders of the Jain faith; propagator of the Jain faith or tīrtha; creator of the four sections, viz. monk, nun, layman and laywoman (sādhu, sādhvī, śrāvaka and śrāvikā); same as Jina; sometimes spelt Tīrthakara; also called Ādikartṛ. Note: tīrthaṅkara is defined in the “Indian epigraphical glossary” as it can be found on ancient inscriptions commonly written in Sanskrit, Prakrit or Dravidian languages.

Tīrthaṅkara (तीर्थङ्कर) in the Sanskrit language is related to the Prakrit word: Titthaṃkara.

Tīrthaṃkara (तीर्थंकर) [Also spelled tirthkar]:—(nm) the twenty-four leading religious preceptors of Jainism, the last of them being Lord Mahavir.

Tīrthaṃkara (ತೀರ್ಥಂಕರ):—[noun] any of the twenty-four highest religious teachers of Jaina religion.

Chapter 4.4c - Tattvaśravaṇa (attentive listening to doctrinal matters ) < [Chapter 4 - The Eight Yogadṛṣṭis and the nature of a Liberated Soul]

Chapter I.b - Meaning of the term Tīrthaṅkara < [Chapter I - Introduction]

Chapter I.c - The lives of the Tīrthaṅkaras < [Chapter I - Introduction]

Part 1 - The Origin of Jainism < [Chapter VI - The Jaina Philosophy]