Kumbhakarna means something in Buddhism, Pali, Hinduism, Sanskrit, Jainism, Prakrit, the history of ancient India, Marathi. If you want to know the exact meaning, history, etymology or English translation of this term then check out the descriptions on this page. Add your comment or reference to a book if you want to contribute to this summary article. 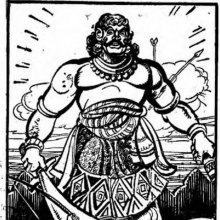 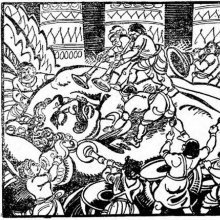 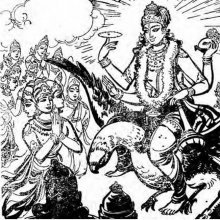 Kumbhakarna is a rakshasa and brother of Ravana in the Indian Ramayana epic. Despite his monstrous size and great hunger, he was described to be of good character, though he killed and ate many Hindu monks just to show his power. Kumbhakarna had two sons, Kumbha and Nikumbha, who too fought in the war against Rama and were killed.

Kumbhakarṇa (कुम्भकर्ण, “jar’s-ear”):—In Vedic hinduism, he is one of the half-brothers of Kubera, who was the Vedic God of wealth presiding over all earthly treasures.

Kumbhakarna was the brother of King Ravana of Lanka. Ravana, Kumbhakarna, Vibhishana were the sons of a sage named Vishrava, born to a Rakshasa woman named Kaikasi. They had a sister named Shurpanakha. Kubera is their half-brother, born to another wife of Vishrava.

He was a giant in stature, and consumed huge amounts of food when he was awake. One of the most powerful warriors on Ravana's side, he was also very knowledgeable about proper conduct. Like his brother Vibhishana, he counselled Ravana to return Sita to Rama to avert the war, but unlike Vibhishana, he did not abandon Ravana when his advice was rejected.

He fought valiantly against the Vanara army of Rama, causing great damage. Ultimately, he was slain by Laxmana with the help of a divine missile. Though he fought on the side of evil, his devotion to Ravana and his loyalty to his kinsmen is highly praised, and is contrasted favorably with the "treachery" of his brother Vibhishana, who fought on Rama's side.

Kumbhakarṇa (कुम्भकर्ण) is the name of a Rākṣasa mentioned as attending the teachings in the 6th century Mañjuśrīmūlakalpa: one of the largest Kriyā Tantras devoted to Mañjuśrī (the Bodhisattva of wisdom) representing an encyclopedia of knowledge primarily concerned with ritualistic elements in Buddhism. The teachings in this text originate from Mañjuśrī and were taught to and by Buddha Śākyamuni in the presence of a large audience (including Kumbhakarṇa).

Kumbhakarṇa (कुम्भकर्ण) is another name of Bhānukarṇa, who is a brother of Rāvaṇa: the eighth Prativāsudeva, according to both Śvetāmbara and Digambara sources. Jain legends describe nine such Prativāsudevas (anti-heroes) usually appearing as powerful but evil antagonists instigating Vāsudeva by subjugating large portions of Bharata-land. As such, they are closely related with the twin brothers known as the Vāsudevas (“violent heroes”) and the Baladevas (“gentle heroes”).

The Prativāsudevas (such as Daśamukha) fight against the twin-heroes with their cakra-weapon but at the final moment are killed by the Vāsudevas. Their stories are narrated in the Triṣaṣṭiśalākāpuruṣacarita (“the lives of the sixty-three illustrious persons”), a twelfth-century Śvetāmbara work by Hemacandra.

Accordingly, “[...] Kaikasī bore another son, indicated by the dream of a sun, named Bhānukarṇa, and also called by another name, Kumbhakarṇa. Kaikasī bore a daughter, named Candraṇakhā, because her nails were like the moon. She was called Śūrpaṇakhā by the people. After some time had passed Kaikasī again bore a son, named Bibhīṣaṇa, indicated by the dream of a moon. The three full brothers, full sixteen bows tall, played agreeably day by day, fearless, in play suitable for their ages at that time. [...]”.

Kumbhakarna is one of the places visited by Chaitanya during his pilgrimage in Southern India between April 1510 and January 1512.—Kumbha-karna.—Kumbakonam in the Tanjore district, 20 miles north-east of Tanjore town. It contains 12 principal Shaiva and 4 Vaishnav temples and one dedicated to Brahma. (Tanjore Gaz. 217-219).

kumbhakarṇa (कुंभकर्ण).—m (S) The name of a drowsy Rakshas, the brother of Rawan̤. Hence, appellatively. A sound sleeper, or a dull sleepyhead.

Kumbhakarṇa (कुम्भकर्ण).—'pitcher-eared', Name of a gigantic Rākṣasa, a brother of Rāvaṇa and slain by Rāma. [He is said to have devoured thousands of beings including sages and heavenly nymphs, and the gods were anxiously waiting for an opportunity to retaliate upon the powerful demon. After Brahmā had inflicted on him a curse for the humiliation to which he subjected Indra and his elephant Airāvata, Kumbhakarṇa began to practise the most rigid austerities. Brahmā was pleased and was about to grant him a boon, when the gods requested Sarasvatī to sit on his tongue and to pervert it. Accordingly when he went to the god, instead of asking Indrapada he asked Nidrāpada which was readily granted. It is said that he slept for six months at a time, and, when roused, was awake for only one day. When Lankā was besieged by the monkey-troops of Rāma, Ravāṇa with great difficulty roused Kumbhakarṇa, desirous of availing himself of his gigantic strength. After having drunk 2 jars of liquor, he took Sugrīva prisoner, besides devouring thousands of monkeys. He was ultimately slain by Rāma.] Rām.6; R.12.8.

(-rṇaḥ) The gigantic brother of Ravana. E. kumbha and karṇa the ear.

1) Kumbhakarṇa (कुम्भकर्ण):—[=kumbha-karṇa] [from kumbha] m. ‘pot-eared’, Name of a Rākṣasa (the brother of Rāvaṇa, described in [Rāmāyaṇa vi] as sleeping for six months at a time and then waking to gorge himself), [Mahābhārata iii; Rāmāyaṇa; Raghuvaṃśa xii, 80; Bhāgavata-purāṇa]

1) [noun] one of the prominent characters in epic Rāmāyaṇa, brother of the villain Rāvaṇa, known for his continuous sleeping for months.