Sculptures in temples in Kumbakonam: photo 453

Photo 453 of 640 in Gallery: Sculptures in temples in Kumbakonam 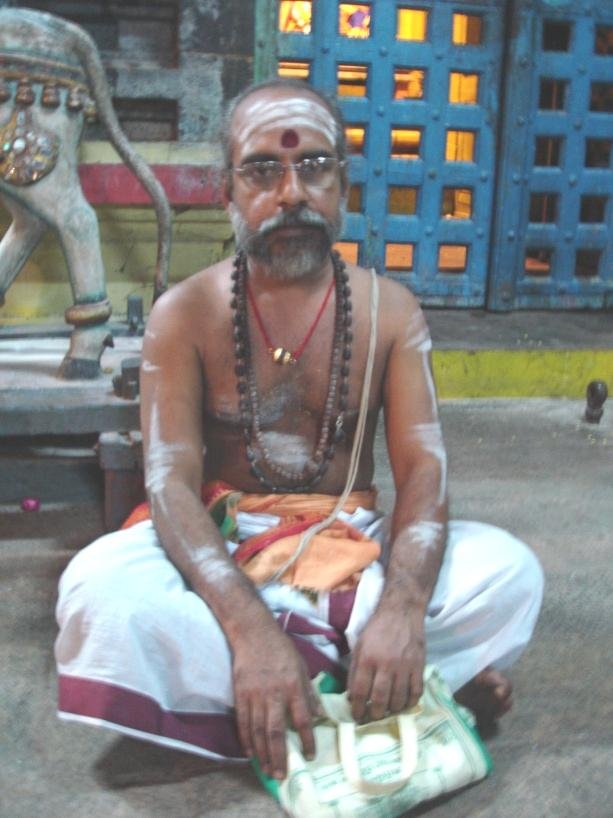 A. Yes I hail from Adisaivavamsam [Adisaivavamsa]. I am the 7th generation. I am called Sivacarya since I have taken Siva Diksa.

2. What is the significance of Velli Kavacam [Kavaca] at the base of the Lingam?

A. This is meant as a protection to the Lingam. During Abhisekam [Abhiseka] water and other materials should not fall on the Lingam.

3. What is the Avadiyar of the Lingam?

4. Is there any special name for the Garbha Graha Vimana?

A. No it is normal. It has no special structure.

5. How is the Utsava Murti taken into the Palli Arai

A. Only his Padam [Pada] is taken.

A. Ambal is already kept in the Palli Arai.

8. How many hands does Ambal have?

A. She has Caturbhujam–4 hands. They hold Gindi (Kamandalu),

7. Can you please explain the significance of Arukala Puja

A. The Puja s are done in the following order:

Usa Kala Puja–Done at 6 am. At this time Puja and Abhisekam [Abhiseka] is done to

Kalasandhi Puja–Puja is done in the order of Suryan, Vinayaka, Svami, Ambal and Parivaramurtigal (Daksinamurti and others). Done at 9 am.

Sayaraksai Puja–Done between 4pm–4.30 pm. It begins with Candran as he is the Lord of night. Puja is done in the order of Candran, Nataraja, Svami, Ambal, Somaskandar and Parivaramurti.

8. For Arudra Darsanam [Darsana] is Nataraja brought out?

A. Yes both Nataraja and Sivakamasundari.

A. It is Vanni Maram.

10. What is the Tirtham [Tirtha] or tank called when we enter from Kilakku(east)?

A. Skandatatakam [Skandatataka] or Mangalakupam [Mangalakupa]. Murugan is believed to have come here and seeked the blessings of Ambal. He received “Vel’ in Cikkil. He then came to Kumbakonam, bathed in the Tirtham [Tirtha] and got Mantropadesam [Mantropadesa] from Ambal. He then proceeded to Tirucendur to do Surasamharam. So Murugan is called here Sanmugar/Kartikeya. Ambal gives Mantrasakti to the Ayudha of Murugan. In Adi Kumbesvarar, Murugan has 6 faces and 6 hands, he is in standing posture, going to war. Hence this holy water is called Skanda Tirtham.

11. Were there Devadasis associated with the temple in olden days?

12. What work did the Devadasis have?

A. They used to dance in the Nataraja Mandapam during Utsavams [Utsavas] and they used to make garlands for the Lord.

13. Which God is there in the Nataraja Mantapam?

A. Only Nataraja and Sivakami.

14. What is the story of Kumbakonam?

A. As you know, there are 4 Yugas–Sat Yuga, Treta Yuga, Dvapara Yuga and Kali Yuga. At the end of each Yuga, Pralaya occurs. Then a new Yuga begins. During the Mahapralaya, at the end of Dvaparayuga time had come for all creation to be destroyed. Brahma who is the Sristi Karta and Visnu who is the Sthiti Karta prayed to the Samhara Karta–Siva, that the seeds of creation should not be destroyed. Isvara makes a Kudam [Kuda] from the mud of Punya Ksetra and placed the seeds of creation in them along with Vedas, Puranas, Agamas, Itihasas and other Sastras. He also filled it with the nectar of immortality or Amrtam [Amrta] and gave it to Brahma and asked him to keep it in Himaya peak in Kailasa. Brahma takes it to Himaya Parvat and does daily Puja to it till Pralaya. During the Pralaya, this Kalasam [Kalasa] is swept away in the currents. Brahma asks Siva what is to be done? Isvara tells Brahma that when the world gets destroyed wherever this Kalasam ] lodges itself, it will be the Punya Ksetram [Ksetra] and there Isvara would create the world again. As the Kumbham [Kumbha] gets lodged, from it–coconut, mango leaves, Darbai (Kusa grass), Punul (thread of flowers) and Vastram ] (cloth) are all scattered to various places. Only the Kumbham [Kumbha] gets lodged in

this place. Wherever the rest of the things fell, there originated a Lingam–Nagesvarar, Somesvarar, Gautamesvarar and Kasi Visvesvarar. The Kumbham ] alone lodged itself here. Isvara came down in human form as a hunter (Kiratarupa) and shot an arrow from Tiruvidaimarudur. He was unable to break it. Then he came further to Banapuram [Banapura] and shot an arrow and broke the Kumbham. He brought out all the “Saktibijam’. When he broke the Kumbham [Kumbha] and where the upper part fell became the “Kudavasal” and where the bottom part fell became Tirukalayanallur or Sahakottai. The middle part stayed here. Portions of Amrtam ] from the Kumbham [Kumbha] fell into Mahamaham Kulam [Mahamaha Kula] and Potramarai Kulam.Rest of the Amrtam [Amrta] and the broken Kumbham construed into a Lingam. Isvara worshipped himself and taught the world how to worship. He taught man how to do this Puja. This Lingam [Linga] was Kumbesvarar. Isvara later on merged with the Lingam in the form of Jyoti. Since he is here from the time of Pralaya, he is called “Adi Kumbesvarar’ Since the Lord is in the form of a Kumbha, he is called Kumbesvarar. Kumbha plus Ghonam [Ghona] (Sanskrit word) meaning Kumbha with a broken nose. In Tamil it is misinterpreted that since the upper part of the Kumbham [Kumbha] is broken, it stands bent meaning “bent Kumbham”. Since the Kudam [Kuda] was lodged here it is also called as Tirukudandai. It is also called Kudaimukku since the upper part was broken.

In Bhavisyottara Purana [Puranam] it is written about Kumbakonam Mahatmya [Mahatmyam], in the 18th chapter it is written–

15. What is the greatness of Ambal here in this temple?

A. After Isvara worshipped the Linga here, Brahma introduced Utsavas here. Masi Mahotsavam [Mahotsava] is celebrated as Tiruvila. Once in 12 years is Mahamaham [Mahamaha] when Surya enters Kumbha Rasi in Guru Muhurtam.

After Isvara worshipped himself in Kiratarupa, he called Parvati from

himself consecrated Ambal here. Only in this temple Isvara and Parvati are facing east symbolizing oneness of Siva and Sakti. Out of the 72 crore Mantras 36 crore Mantras are Siva Tattva Mantras and 36 crores are Sakti Tattva Mantras. Our human body has 72000 nerves which are represented by these Mantras. There are 6 Cakras in the human body Muladhara, Ajna, Anagata, Manipuraka, Svadhisthana and Visudhi representing the six forms of Ambal namely Ganambika, Rigvibhedani, Mantrapithesvari, Durganarthaprade, Sarvepsitabalaprada and Mangalambika. She resides in this place as Mangalambika. She is a Swayambhu Murti whose Sthapana has been done by Lord Siva himself. This is the Matru Sthana (mother place) for other Saktipithas. The 51 Bijaksaras of Ambal have separated into 51 Saktipithas. One is in Nepal, one is in Ceylon and the rest 49 are in India. To name a few–Kasivisalaksi, Kancikamaksi, Madurai Minaksi, Ramanathapuram [Ramanathapura] Parvatavardini, Tiruvaiyyar Dharmasamvardhini etc. Each of them represent one Bijaksara. This (Mangalambika) is the Saktipitham [Saktipitha] Matrusthana where all the powers unite.

16. Is there any significance behind the different sizes of Siva Lingas [Lingams] in different temples?

A. Yes, in the Silpasastra, the size of the Garbha Graha decides the size of the Siva Linga. There are 3 types of idols according to the Agamas–Aruvam–which is Linga Bhedam, Uruvam–which has hands, face and feet and Aruruvam–a mix of both, not having a full form. The Lingams [Lingas] are of seven types–Mamsa Lingam, Devata Lingam, Asura Lingam, Rsi Lingam, Deva Lingam, Svayambhu Lingam. The Adikumbesvara is a Svayambhu Lingam. It has not only self originated, Siva himself has worshipped it to show to the world how to worship. We have to take care of the Lingam [Linga] as if it is a child, that is, if we do Abhisekam [Abhiseka] fast, then it can dissolve. It is delicate. Samrani Tailam is applied on top of the Lingam to hold the sand tightly. The Tailam [Taila] is to be applied softly. Eight fragrant substances are mixed and applied on top of the Lingam. Usually Siva is in an angry state. But here as Adikumbesvara he is Santasvarupa.

A. According to the Agamas whichever temple is a Sivalaya, the Utsavamurti is Somaskandar.

18. During Pancamurti Utsavam [Utsava] or procession, who is taken out first?

20. He is Siva’s main assistant or Adhikari. If we need anything from Siva, we have to ask Candikesvarar–

One who is worshipping Siva, one who is doing Siva Dhyanam 24 hours, i.e. Candikesvarar, he is the one who grants fruits of Sivarcanai. He is a minor god