Shankara means something in Buddhism, Pali, Hinduism, Sanskrit, Jainism, Prakrit, the history of ancient India, Marathi. If you want to know the exact meaning, history, etymology or English translation of this term then check out the descriptions on this page. Add your comment or reference to a book if you want to contribute to this summary article. 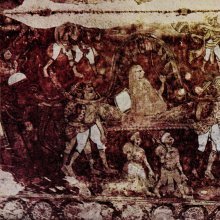 Born in Kāladi in C. 788 A.D., Śaṅkara was a “child-prodigy”. Son of Śivaguru and Āryāmbā (or Satī Mādhavīyā or Viśiṣṭā), Śaṅkara not only performed miracles in his early age, but even used his charisma to influence his mother to allow him to take sudden renunciation i.e., āpat-saṃnyāsa’, at the early age of six or seven, to become a pupil of Govindapāda. This early phase of his life culminated in the composition by him (at the age of twelve) of his famous commentary on the Brahma-Sūtra, the Śārīraka-bhāṣya or Brahma-sūtra-bhāṣya, which continues till date to pose a challenge even to the most articulate among the intellectuals of the world over.

Śrī Śaṅkara, the greatest expounder of Advaita Vedanta is reputed to have flourished between 788 and 820 A.D. This date cannot be regarded as finally settled and a large number of Indian scholars bring down his date to the first or second century A.D. or B.C. However, the latter part of the eighth century has been accepted by thinkers as the most probable date.

Śaṅkara (शङ्कर):—Third of the eleven emanations of Rudra (ekādaśa-rudra), according to the Aṃśumadbhedāgama and the Śilparatna. The images of this aspects of Śiva should have three eyes, four arms, jaṭāmakuṭas and be of white colour. It should be draped also in white clothes and be standing erect (samabhaṅga) on a padmapīṭha. It should be adorned with all ornaments and with garlands composed of all flowers and it should keep their front right hand in the abhaya and the front left hand in the varada poses, while it should carry in the back right hand the paraśu and in the back left hand the mṛga.

Śaṅkara (शङ्कर) is a Sanskrit name referring to one of the eight manifestations of Unmatta, who is a form of Bhairava. According to the Rudrayāmala, there are eight main forms of Bhairava who control the eight directions of this universe. Each form (eg., Unmatta) has a further eight sub-manifestations (eg., Śaṅkara), thus resulting in a total of 64 Bhairavas.

When depicting Śaṅkara according to traditional iconographic rules (śilpaśāstra), one should depcit him (and other forms of Unmatta) having a white color and good looks; he should carry in his hands the kuṇḍa, the kheṭaka, the parigha (a kind of club) and bhiṇḍipāla. The word Śilpaśāstra refers to an ancient Hindu science of arts and crafts, dealing with subjects such as painting, sculpture and iconography.

Śaṅkara (शङ्कर) is a Sanskrit word referring to a deity. Acording to the Nāṭyaśāstra 1.88-93, when Brahmā, Indra and all other gods went to inspect the playhouse (nāṭyamaṇḍapa) designed by Viśvakarmā, he assigned different deities for the protection of the playhouse itself, as well as for the objects relating to dramatic performance (prayoga).

As such, Brahmā assigned Śaṅkara to the second section (joint/knot, parva) of the Jarjara (Indra’s banner staf). The protection of the playhouse was enacted because of the jealous Vighnas (malevolent spirits), who began to create terror for the actors.

2) Śaṅkara (शङ्कर).—A simpleton, who was killed by his wife. This brahmin had a very mean wife called Kalipriyā. After killing her husband she left the place with her paramour. But, wild animals killed him on their way in the forest. In all repentance Kalipriyā returned home and after worshipping the corpse of her husband she observed Kārttika vrata at the instance of certain women. Thereby she got absolution from sin and attained heaven. (Padma Purāṇa, Brahmakhaṇḍa, Chapter 10).

Śaṃkara (शंकर) is a name mentioned in the Mahābhārata (cf. XIV.8.14, XIV.8, XIV.8.27, XIV.8) and represents one of the many proper names used for people and places. Note: The Mahābhārata (mentioning Śaṃkara) is a Sanskrit epic poem consisting of 100,000 ślokas (metrical verses) and is over 2000 years old.

Śaṅkara (शङ्कर) is the Sanskrit name of a deity presiding over Kurucandra, one of the sixty-eight places hosting a svāyambhuvaliṅga, which is one of the most sacred of liṅgas according to the Śaivāgamas. The list of sixty-eight svāyambhuvaliṅgas and presiding deities (eg., Śaṅkara) is found in the commentary on the Jirṇoddhāra-daśaka by Nigamajñānadeva. The word liṅga refers to a symbol used in the worship of Śiva and is used thoughout Śaiva literature, such as the sacred Āgamas.

Śaṅkara (शङ्कर) or Śaṅkarāgama refers to one of upāgamas (supplementary scriptures) of the Santānāgama which is one of the twenty-eight Siddhāntāgama: a classification of the Śaiva division of Śaivāgamas. The Śaivāgamas represent the wisdom that has come down from lord Śiva, received by Pārvatī and accepted by Viṣṇu. The purpose of revealing upāgamas (eg., Śaṅkara Āgama) is to explain more elaborately than that of mūlāgamas (eg., Santāna-āgama) and to include any new idea if not dealt in mūlāgamas.

Source: academia.edu: A Critical Study of the Vajraḍākamahātantrarāja (II) (shaivism)

Śāṅkara (शाङ्कर) is the name of a Kṣetrapāla (field-protector) and together with Śāṅkarī they preside over Vārāṇasī: one of the twenty-four sacred districts mentioned in the Kubjikāmatatantra. Their weapon is the gadā and their abode is the tāla-tree. A similar system appears in the 9th century Vajraḍākatantra (chapter 18).

Adi Shankara (788 CE - 820 CE) was an Indian philosopher from Kalady (Kerala) who consolidated the doctrine of Advaita Vedānta. His teachings are based on the unity of the ātman and brahman— non-dual brahman, in which brahman is viewed as nirguna brahman, brahman without attributes.

Śaṅkara (traditionally 788-820 CE) was the key figure in the Advaita Vedānta school, one of the most influential schools of Indian thought. He adopted much of Nāgārjuna's deconstructive approach, according to which the world as it appears to us is illusion, but took it out of a Buddhist context, instead using it to support the worldview of the Upaniṣads.

During the time of Dharmakirti, Adi Shankara (569-537 BCE) defeated Buddhists in the debate. Taranatha writes; “Inflated with vanity, they entered into debate with Shankaracharya. In this the Buddhists were defeated and, as a result everything belonging to the twenty-five centers of the Doctrine was lost to Tirthikas (Brahmana philosophers) and the centers were deserted. About five hundred Upāsakas (Buddhists) had to enter the path of Tirthikas.”

[«previous (S) next»] — Shankara in Jainism glossary
Source: Encyclopedia of Jainism: Tattvartha Sutra 5: The category of the non-living

Śaṃkara (शंकर) is an example of a Śaivite name mentioned in the Gupta inscriptions. Classification of personal names according to deities (eg., from Śaivism) were sometimes used by more than one person and somehow seem to have been popular. The Gupta empire (r. 3rd-century CE), founded by Śrī Gupta, covered much of ancient India and embraced the Dharmic religions such as Hinduism, Buddhism and Jainism. Derivation of personal names (eg., Śaṃkara) during the rule of the Guptas followed patterns such as tribes, places, rivers and mountains.

Śaṃkara is an example of a name based on some sect (eg., Buddhist or Jain) mentioned in the Gupta inscriptions.

Saṅkara.—(EI 9), also called saṅkuru; a double sack. Note: saṅkara is defined in the “Indian epigraphical glossary” as it can be found on ancient inscriptions commonly written in Sanskrit, Prakrit or Dravidian languages.

saṅkara (संकर).—m (S) Confusedly mixing or mingling. 2 Tumultuous intermixture; a medley, farrago, hotchpotch. 3 also saṅkarajāti f (S) A mixed caste or race; a caste proceeding from the promiscuous sexual intercourse of the four tribes in the first instance, and again from their commerce with the descendants of such a connection, or the indiscriminate cohabitation of those descendants amongst one another.

sāṅkara (सांकर).—m R Straws, sticks, leaves, mud &c. as blocking up any watercourse: also rubbish as deposited or gathered by a stream, alluvium. 2 Phlegm collected in the throat and impeding the voice or utterance.

2) Name of a celebrated teacher and author (śaṃkarācārya).

2) The crackling of flames.

Śaṃkara is a Sanskrit compound consisting of the terms śam and kara (कर).

(-raḥ) 1. Mixing, blending, confounding. 2. A mixed caste or race, one proceeding from the promiscuous intercourse of the four tribes in the first instance, and again from their commerce with the descendants of such a connection, or the indiscriminate cohabitation of those descendants amongst one another; most Hindus of the present age are of one of the many branches of this race, the highest of which is impure and inferior to the Sudra: under this term two kinds of men are included according to the Ramayana; the one denominated yonisaṅkara, mixed or degraded by birth and the other ācārasaṅkara degraded by conduct. 3. The mixing together of two or more dependent figures of speech in the same passage. 4. Dust, sweepings. 5. The crackling of flame. f. (-rī) A new bride. E. sam before kṝ to scatter, or kṛ to make, aff. ap.

Śaṅkara has the following synonyms: Oḍāśaṅkara.

Chapter 39 - Cakra-tīrtha (for the sake of the discus)

Chapter 105 - The Benefits of listenings to the Purāṇa

Chapter 46 - Vaḍavā and other Holy Centres