Buddhism means something in Buddhism, Pali, Hinduism, Sanskrit, the history of ancient India. If you want to know the exact meaning, history, etymology or English translation of this term then check out the descriptions on this page. Add your comment or reference to a book if you want to contribute to this summary article. 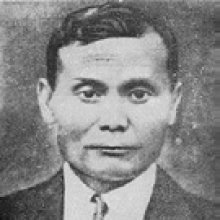 Buddhism (बुद्धिस्म्).—(BUDDHA-MATA). The origin of Buddhism was in the sixth century B.C. This new religion was shaped out of Hinduism that prevailed at that time. Buddhism which had its origin in North India, prevailed everywhere in India up to the eleventh century A.D. During that period there was an overflow of this religion to the other parts of Asia. Now this religion has its full sway over the people of Burma. 90% of the population there, are adherents of Buddhism. 80% of the people of Thailand, 60% of the people in Ceylon and Japan and 17% in China are now Buddhists. In India, Pakistan and the Philippines the Buddhists are only a minority. Even though Indonesia is a Muslim country there is a small class of Buddhists there. Combodia, Lavos and Tibet are considered to be Buddhist countries. In Nepal there are only two religions, Hinduism and Buddhism. In countries outside Asia there are followers of Buddhism. Statistics reveal that there are one hundred and sixtyfive thousand Buddhists in North America, one hundred and thirtyfive thousand in South America, and ten thousand in Europe. The number of Buddhists in the world today is 150.31 crores.

[«previous (B) next»] — Buddhism in Buddhism glossary
Source: WikiPedia: Buddhism

Buddhism is a family of beliefs and practices considered by most to be a religion and is based on the teachings attributed to Siddhartha Gautama, commonly known as "The Buddha" (the Awakened One), who was born in what is today Nepal. He lived and taught in the northeastern region of the Indian subcontinent and most likely died around 400 BCE.

Buddhism is broadly recognized as being composed of two major branches:

Buddhism was once commonly seen and practised in ancient Kashmir (Kaśmīra) according to the Nīlamatapurāṇa.—The dwelling places of the Śākyas should be whitewashed and the walls of the Caityas—the abodes of the god—should be decorated with paintings. Gifts of clothes, food and books should be made to the Buddhists and a festival swarming with dancers and actors should be celebrated. Worship of Buddha with eatable offerings, flowers, clothes etc. and the charities to the poor should continue for three days.

Kalhaṇa testifies to the high popularity of Buddhism in Kaśmīra from the time of Aśoka up to that of Lalitāditya. Hiuen Tsang refers to hundred Buddhist monasteries in Kaśmīra, and Ou-Kong gives the number over three hundred. As regards the archaeological evidence, the Buddhist buildings of 8th cent. A.D. only have been discovered as yet in Kaśmīra, but the images of Buddha and Bodhisattvas discovered in the valley can be assigned to an early period.

Buddhism during the reign of the Śilāhāra dynasty (r. 765-1215 A.D.).—The only Buddhist inscriptions of the period discovered so far exist at Kānherī, which seems to have been a fairly flourishing centre of that religion in Koṅkaṇ in the reign of the Early Śilāhāras. The inscriptions show that the centre attracted devotees from far-off places like Gauḍa or West Bengal. They made permanent endowments (akṣaya-nīvis) for the worship of the Bhagavat (Buddha) and the food, clothing and books of the monks residing in the caves by depositing the necessary amounts of drammas with the Venerable Community of the place. We have no further mention of this centre of Buddhism until we come to the time of Mallikārjuna (the second half of the 12th cen. A.D.), one of the later Śilāhāras.

Search found 237 books and stories containing Buddhism; (plurals include: Buddhisms). You can also click to the full overview containing English textual excerpts. Below are direct links for the most relevant articles:

Teaching 6 - Wisdom For The World

Teaching 1 - From Samsara To Nibbana

The Scientific Outlook Of Buddhism (by Wang Chi Biu)

Chapter 2 - The Research Spirit Of Buddhism

Chapter 5 - The Golden Age and Tradition of Royal Dynasty