Marici means something in Buddhism, Pali, Hinduism, Sanskrit, Jainism, Prakrit, the history of ancient India. If you want to know the exact meaning, history, etymology or English translation of this term then check out the descriptions on this page. Add your comment or reference to a book if you want to contribute to this summary article.

Alternative spellings of this word include Marichi. 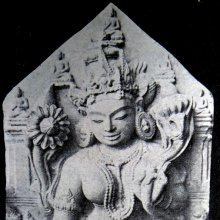 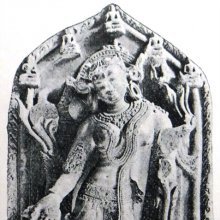 2) Marīci (मरीचि).—A celestial woman. In Mahābhārata, Ādi Parva, Chapter 122, Verse 62 we find that she attended a dance at the celebrations at the time of Arjuna’s birth.

1) Marīci (मरीचि) refers to “pepper”, which is used in the worship of Śiva, according to the Śivapurāṇa 2.1.14:—“a cow (go) along with necessary adjuncts shall be given in charity and a bull shall also be given. Worship with pepper (marīci) is also conducive to the destruction of enemies. The Śivaliṅga shall be decorated with the leaves of Āḍhakī flowers and worshipped. This worship is conducive to different kinds of happiness and benefits”.

2) Marīci (मरीचि) was created as a Sādhaka (aspirant) by Brahmā out of his eyes (netra), according to the Śivapurāṇa 2.1.16:—“[...] I [viz., Brahmā] created many other things as well, but O sage, I was not satisfied. Then O sage, I meditated on Śiva and his consort Ambā and created aspirants (sādhakas). I created Marīci from my eyes (netra), [...] O foremost among sages, creating thus, thanks to the favour of Mahādeva, these excellent Sādhakas (eg., Marīci) I became contented. Then, O dear one, Dharma, born out of my conception assumed the form of Manu at my bidding and was engaged in activity by the aspirants”.

1a) Marīci (मरीचि).—A mind-born son of Brahmā born with Nārada at the beginning of creation;1 married Kalā a daughter of Kardama;2 father of Kaśyapa;3 came with Brahmā to see Kapila born to Kardama;4 was present in Dakṣa's yajña;5 directed the aśvamedha of Indra;6 came to see the Trivikrama avatār of the Lord;7 did not comprehend Hari's māya.8 The chief sage of Vena's reign responsible for punishing him. A sage in Dāruvana;9 one of the seven sages of Svāyambhuva epoch: instructed by Brahmā on the eighteen purāṇas; praised Śiva, out to destroy Tripuram;10 had a daughter Surūpā, whom Angiras got married.11

1c) His wife was Ūrṇā; had six sons in the first antara; then Gods laughed at Brahmā seeking connection with his daughter; these were born of Hiraṇyakaśipu as Asuras, but were taken away by Yogamāyā; then they were born of Devakī and killed by Kaṃsa.*

1d) Created from the eyes; one of the Nine Brāhmaṇas alluded to in the purāṇas.*

1f) A son of Brahmā married Dharmavratā, the daughter of Dharma whom he cursed for dereliction of duty, to become a stone; got one hundred sons through her; in turn cursed by her for the unjust curse.*

2) Mārīci (मारीचि).—A son of Danu; father of many sons numbering 6000, Paulomas and Kālakeyas, all residents of Hiraṇyapura and could not be killed even by the Devas, because of a special boon from Brahmā; Arjuna slew them;1 his wives, Pulomā and Kālakā, the daughters of Vaiśvānara.2

Marīci (मरीचि) is mentioned as one of the seven mind-born sons of Brahmā, also known as the seven prajāpatis, or the seven brahmās, according to the first chapter of the Brahma-purāṇa (on the origin of Devas and Asuras). Accordingly, “Desirous of evolving creation befitting these, he created Prajāpatis (Lords of subjects) viz. Marīci, Atri, Aṅgiras, Pulastya, Pulaha, Kratu and Vasiṣṭha. Thus the lord of great refulgence created seven mental sons. In the Purāṇas these are known as the seven Brahmās”.

The Brahmapurāṇa (mentioning Atri) is one the eighteen mahāpurāṇas originally composed of over 10,000 verses. The first three books of the extant edition contains a diverse amount of topics such as creation theory, cosmology, mythology, philosophy and genealogy. The fourth and last part represents pilgrimage’s travel guide (māhātmya) and narrates the legends surrounding numerous holy spots (tīrtha) around the Godāvarī region in India.

Marīci (मरीचि) refers to “controlling deity of the fifty kinds of winds in the universe”. (cf. Glossary page from Śrīmad-Bhagavad-Gītā).

Marichi is the son of Brahma, the cosmic creator, and also one of the Saptarshi (Seven Great Sages Rishi), in the First Manvantara, with others being Atri, Angiras, Pulaha, Kratu, Pulastya, and Vashishtha.

Before the creation started, Lord Brahma needed a few people who can be held responsible for the creation of the remaining Universe. Therefore he created 10 Prajapatis (Ruler of the people) from his Manas (Mind) and 9 from his body. Marichi is one of the manasaputras of Lord brahma. The 10 Prajapatis are as follows:

Marichi is then married to Kala and gave birth to Kashyap (Kashyap is also sometimes acknowledged as a Prajapati, who has inherited the right of creation from his father).

Marīci (मरीचि, “mirage”) refers to one of the ten comparisons (upamāna) according to the 2nd century Mahāprajñāpāramitāśāstra chapter 11. These upamānas represent a quality of the Bodhisattvas, accompanying the Buddha at Rājagṛha on the Gṛdhrakūṭaparvata. They accepted that dharmas are like a mirage (marīci). When the light of the sun (sūryāloka) and the wind (vāyu) stir up the dust (rajas), there is a mirage (marīci); in the desert (kāntāra), it appears as if there were gazelles (ghoṭakamṛga) and, on seeing them, not knowing, we assume the presence of water (vāri). It is the same for the characteristics of male and female (strīpuruṣa): when the sun of the fetters (saṃyojana) and the afflictions (kleśa) has heated up the dust of the formations (saṃskāra) and the wind of bad thoughts (mithyā-manasikāra) swirls in the desert of transmigration (saṃsāra), the person without wisdom asserts the characteristics of male and female (strīpuruṣa). This is a mirage.

Mārīcī (मारीची) refers to one of the emanations of Vairocana, as commonly depicted in Buddhist iconography of.—Mārīcī is invoked by the Lamas of Tibet about the time of sun-rise, which shows her connection with the sun. She too, like the Hindu Sun-god, has a chariot. Her chariot is drawn by seven pigs, while that of the sun is drawn by seven horses. Again, the charioteer of the sun is Aruṇa, who has no legs, but that of Mārīcī is either a goddess with no legs, or Rāhu—only the head without a body.

Mārīcī (मारीची, “moonlight”) refers to one of the “five protectors” (pañcarakṣā) as defined in the Dharma-saṃgraha (section 5). The Dharma-samgraha (Dharmasangraha) is an extensive glossary of Buddhist technical terms in Sanskrit (eg., pañcarakṣā and Mārīcī). The work is attributed to Nagarguna who lived around the 2nd century A.D.

Mārīcī (मारीची) refers to the sixth of “seven days” (saptavāra) classified as a dhāraṇī according to a 17th-century Sanskrit manuscript from Nepal .—This collection associates each dhāraṇī with a specific day of the week, a tradition going back to at least the sixteenth century in Nepal.

Mārīci (मारीचि) participated in the war between Rāma and Rāvaṇa, on the side of the latter, as mentioned in Svayambhūdeva’s Paumacariu (Padmacarita, Paumacariya or Rāmāyaṇapurāṇa) chapter 57ff. Svayambhū or Svayambhūdeva (8th or 9th century) was a Jain householder who probably lived in Karnataka. His work recounts the popular Rāma story as known from the older work Rāmāyaṇa (written by Vālmīki). Various chapters [mentioning Mārīci] are dedicated to the humongous battle whose armies (known as akṣauhiṇīs) consisted of millions of soldiers, horses and elephants, etc.

Mārīcī (मारीची) is the name of an Apsaras, instructed by Śakra to help in the preparations of Ṛṣabha’s wedding-preparations, according to chapter 1.2 [ādīśvara-caritra] of Hemacandra’s 11th century Triṣaṣṭiśalākāpuruṣacaritra (“lives of the 63 illustrious persons”): a Sanskrit epic poem narrating the history and legends of sixty-three important persons in Jainism.

“[...] Then having ascertained the Lord’s purpose, Purandara at once summoned gods for the tasks of the wedding-preparations.—‘[...] What are you thinking, Mārīcī? What are you looking at, Sumukhī? Why are you not on this side, Gāndharvī?  [...]’. From the bustling of the Apsarases instructing each other in this way, and frequently calling names, a mighty tumult arose”.

Marīci.—a minute unit of measurement. Note: marīci is defined in the “Indian epigraphical glossary” as it can be found on ancient inscriptions commonly written in Sanskrit, Prakrit or Dravidian languages.

-ciḥ 1 Name of a Prajāpati, one of the ten patriarchs created by the first Manu, or one of the ten mindborn sons of Brahman; he was father of Kaśyapa.

(-ciḥ) 1. A saint, the son of Brahma, and one of the Prajapatis, and Brahmadikas, or first created beings, and sovereigns of the world. 2. A niggard, a miser. mf.

Marīci (मरीचि).—[feminine] mote in the air, beam of light (also marīcī); [masculine] [Name] of a Prajapati, the father of Kacyapa.

1) Marīci (मरीचि):—mf. (m. only in [Taittirīya-āraṇyaka]; [probably] connected with marut q.v.) a particle of light, shining mote or speck in the air, [Ṛg-veda; Atharva-veda]

5) m. Name of a Prajā-pati or ‘lord of created beings’ (variously regarded as a son of Svayam-bhū, as a son of Brahmā, as a son of Manu Hairaṇyagarbha, as one of the 7 sages and father of Kaśyapa, or [according to] to [Manu-smṛti i, 35] as the first of the ten Prajā-patis [q.v.] engendered by Manu Svāyambhuva), [Manu-smṛti; Mahābhārata] etc.

6) of the star η in the great Bear, [Varāha-mihira’s Bṛhat-saṃhitā]

10) of the father of Paurṇamāsa, [Purāṇa]

13) of a son of Śaṃkarācārya and various other teachers and authors, [Catalogue(s)]

16) of a [commentator or commentary] on [Siddhāntaśiromaṇi]

Part 4: Incarnation as Marīci < [Chapter I - Previous births of Mahāvīra]