Marica means something in Buddhism, Pali, Hinduism, Sanskrit, Marathi. If you want to know the exact meaning, history, etymology or English translation of this term then check out the descriptions on this page. Add your comment or reference to a book if you want to contribute to this summary article.

Alternative spellings of this word include Maricha. 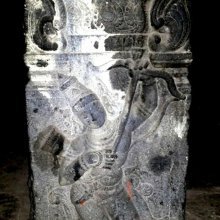 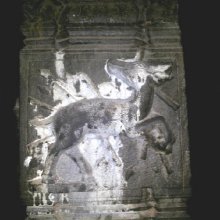 Marica (मरिच):—A Sanskrit word referring to the “black pepper”, a flowering vine from the Piperaceae (pepper) family of flowering plants. It is used throughout Ayurvedic literature such as the Caraka-saṃhitā. Its official botanical name is Piper nigrum. It is native to south India and preferably grows in tropical regions.

This plant (Marica) is also mentioned as a medicine used for the treatment of all major fevers (jvara), as described in the Jvaracikitsā (or “the treatment of fever”) which forms the first chapter of the Sanskrit work called Mādhavacikitsā. In this work, the plant is also known by the names Ūṣaṇa or Śvetamārica. In this work, the plant is mentioned being part of the Trikaṭu group of medicinal drugs.

Marica (मरिच).—The Sanskrit name for an important Ayurvedic drug.—It is black in colour, pungent in taste, irritant, hot and pramāthī (eliminating malas from srotas as by churning). It breaks the mass of kapha and is anti-lipid.

Marica (मरिच) refers to a type of spices according to Gautama-Dharmasūtra XVII.32-33, and is commonly found in literature dealing with the topics of dietetics and culinary art, also known as Pākaśāstra or Pākakalā.—Spices referred to in Vedic literature are haridrā and pippalī. Dharmasūtra literature mentions other spices such as marica and hiṅgu.

Marīca (मरीच) refers to Piper nigrum, and is recommended for use in headache, according to the 17th-century Vaidyavallabha (chapter 7) written by Hastiruci.—The Vaidyavallabha is a work which deals with the treatment and useful for all 8 branches of Ayurveda. The text Vaidyavallabha has been designed based on the need of the period of the author, availability of drugs (viz., marīca) during that time, disease manifesting in that era, socio-economical-cultural-familial-spiritual-aspects of that period Vaidyavallabha.

Marīca (Piper nigrum) is also recommended to cure diseases caused due to poison and its complications according to chapter 8.

Marīca (मरीच) or Tryuṣaṇa (one of the tryuṣaṇa) refers to the medicinal plant Piper nigrum L., and is used in the treatment of atisāra (diarrhoea), according to the 7th century Mādhavacikitsā chapter 2. Atisāra refers to a condition where there are three or more loose or liquid stools (bowel movements) per day or more stool than normal.  The second chapter of the Mādhavacikitsā explains several preparations [including Marīca] through 60 Sanskrit verses about treating this problem.

Marica (मरिच) refers to the medicinal plant known as “Piper nigrum Linn.” and is dealt with in the 15th-century Yogasārasaṅgraha (Yogasara-saṅgraha) by Vāsudeva: an unpublished Keralite work representing an Ayurvedic compendium of medicinal recipes. The Yogasārasaṃgraha [mentioning marica] deals with entire recipes in the route of administration, and thus deals with the knowledge of pharmacy (bhaiṣajya-kalpanā) which is a branch of pharmacology (dravyaguṇa).

Marica (मरिच) is the Sanskrit name for a medicinal plant identified with Piper nigrum Linn. or “black pepper” from the Piperaceae or “pepper” family of flowering plants, according to verse 6.30-32 of the 13th-century Raj Nighantu or Rājanighaṇṭu..—Marica is commonly known in Hindi as Kālīmirca; in Bengali as Golamaricha; in Gujarati as Mari or Kalamari; in Telugu as Miriyalatige; and in Tamil as Milagu; and in Kannada as Karemanesu.

Properties and characteristics: “Marica is pungent, bitter, hot and light. It quells vāta and kapha (i.e., kaphavāta-jit). It is indicated in worms and heart diseases and relieves anorexia (acting as appetiser)”.

1) Marīca (मरीच).—A Dānava. There is a reference to him in Uttara Rāmāyaṇa.

2) . Birth. On the banks of the river Sarayū, there were two states lying adjacent called Malada and Karūṣa. The great sages conducted Jaladhārā (showering of water) on the head of Indra to absolve him of his sin of killing Vṛtrāsura at this place. At that time Mala (excreta) and Karūṣa (spittings) of Indra fell at those places and so they got the name of Malada and Karūṣa. At that place was born after a few years a demoness named Tāṭakā who had the strength of a thousand elephants. A demon called Sunda married Tāṭakā and she got two sons named Mārīca and Subāhu. (Sarga 24, Bāla Kāṇḍa, Vālmīki Rāmāyaṇa and Bāla Kāṇḍa, Kamba Rāmāyaṇa).

Marica (मरिच) refers to Pepper nigrum, forming part of a common diet in ancient Kashmir (Kaśmīra) as mentioned in the Nīlamatapurāṇa.—Marica is mentioned as a spice to be taken with a preparation of barley (verse 722). Suśruta takes it along with vaca etc. as a good appetizer and absorbent of intestinal mucous and unassimilated lymphchyle. Most of the references to the articles of diet occur in the Nīlamata in connection with the offerings made to the gods but it is not difficult to infer from them the food and drink of the common people because “what a man eats his gods eat”.

1a) Mārīca (मारीच).—A son of Sunda and Tāḍaka; set up by Rāvaṇa to take the form of a golden deer in order to secure Sītā: killed by Rāma.*

1b) The author of a Purāṇa: married Pulomā and Kālakā, daughters of Vaiśvānara: These had 1000 sons besides the fourteen who lived in Hiraṇyapura.*

1c) (Mārīcakaśyapa): a son of Antardhāna and grandson of Pṛthu;1 his wife Vasu abandoned him for Soma;2 his sons are said to reside in the Somapatha worlds of the Pitṛs.3

Mārīca (मारीच), the son of demoness Tāṭikā. When Viśvāmitra asked Rāma to kill that impish woman and her two sons, the second son Mārīca, escaped from Rāma’s arrows and fled to the forests, engaged himself in ascetic activities. Rāvaṇa meets him and instigates him to take revenge on Rāma for killing his mother and brother.

Mārīca (मारीच) is a name mentioned in the Mahābhārata (cf. I.70.9) and represents one of the many proper names used for people and places. Note: The Mahābhārata (mentioning Mārīca) is a Sanskrit epic poem consisting of 100,000 ślokas (metrical verses) and is over 2000 years old.

Maricha was originally a Yaksha, the son of Tataka and Sunda. When his father was killed by a curse of the sage Agastya, he tried to attack the sage along with his mother. Both of them were cursed to become demons by that sage. He is a kinsman of the Asura king Ravana.

Along with his brother Subahu, he used to disrupt the Vedic rituals conducted by sage Vishwamitra by throwing unclean meat and blood into the oblation fire. Vishwamitra then sought the help of the Kosala princes Rama and Laxmana to guard his sacrifice. When the two Asuras attempted to disrupt the sacrifice, Rama slew Subahu with a divine missile, Maricha escaped, by running away to Lanka.

Mārīca (मारीच): A character in the Ramayana, uncle of Ravana who transformed himself into a golden deer at the behest of Ravana to entice Sita.

1) Marīca (मरीच) is the name of a Mahoraga mentioned as attending the teachings in the 6th century Mañjuśrīmūlakalpa: one of the largest Kriyā Tantras devoted to Mañjuśrī (the Bodhisattva of wisdom) representing an encyclopedia of knowledge primarily concerned with ritualistic elements in Buddhism. The teachings in this text originate from Mañjuśrī and were taught to and by Buddha Śākyamuni in the presence of a large audience (including Marīca).

-caḥ 1 Name of a demon, son of Sunda and Tāḍakā. He assumed the form of a golden deer, and thus enticed Rāma to a considerable distance from Sītā, so that Rāvaṇa found a good opportunity to carry her off.

2) A large or royal elephant.

-cī 1 Name of the mother of Śākyamuni.

2) Name of a Buddhist goddess.

-cam A collection of pepper shrubs.

(-caḥ) 1. The name of a Rakshasa, the son of Sunda and Tadaka. He allured Rama away in the form of a golden deer and thus assisted Ravana in his design of carrying off Sita. 2. A military or royal elephant. 3. A sort of berry, commonly Kakkoli. f. (-cī) A goddess, peculiar to the Baudd'has. n.

21) Name of [commentator or commentary] on [Siddhāntaśiromaṇi]

2) [noun] its small, pungent seed, dried and used as a condiment; pepper.

2) [noun] name of a demon in Rāmāyaṇa, the great Indian epic.

3) [noun] a field where pepper is cultivated.

Triphala Ghrit (Cure for all Sorts of Eye Diseases. It Increases Eye - Sight)