Satya means something in Buddhism, Pali, Hinduism, Sanskrit, Jainism, Prakrit, Marathi. If you want to know the exact meaning, history, etymology or English translation of this term then check out the descriptions on this page. Add your comment or reference to a book if you want to contribute to this summary article. 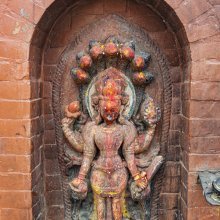 One of the Hands of The Seven Upper Worlds.—Satya: the Patāka hand twisted upwards is applicable.

[«previous (S) next»] — Satya in Dharmashastra glossary
Source: Shodhganga: Facts of society in the Manusamhita

Satya (सत्य):—In Indian tradition, the greatness of truth is high ly valued. According to the Muṇḍakoponiṣad, it is only then power of truth through which one wins and not through falsehood. Truth prevails over untruth. It is the necessary requirement for attaining the Ultimate Reality. The Taittirīya-saṃhitā says that the truth is the Supreme of all–satyaṃ param.

The Mahābhārata deals a complete chapter to define the characteristics an d greatness of truth. There is nothing in this world superior to truth. Everything is supported and protected by truth. Truth is the foundation of dharma and hence it should not be violated. The Agni-purāṇa also states that the truth purifies speech. The Manusaṃhitā also dwells on the concept of virtue in details.

In the words of Manu, the truth is the eternal valu e of a person–dharmaḥ sanātanaḥ. The very famous citation in this relation from the Manusaṃhita is “always speak the truth, speak the pleasing word, do not sp eak the disagreeable truth and do not utter the agreeable falsehood and that is the eternal law.”

1) Satya (सत्य).—A hermit. Mention is made about this hermit who shone in the court of Yudhiṣṭhira, in Mahābhārata, Sabhā Parva, Chapter 4, Verse 10.

2) Satya (सत्य).—An Agni (fire). This Agni Satya was the son of the Agni Niścyavana. He was a worker of Kāladharma (The god of Death). He reduces the pain of living beings who are suffering. So this Agni Satya got the name Niṣkṛti also. This Agni brightens the houses and gardens where people stay. It is stated in Mahābhārata, Vana Parva, Chapter 219, Verse 13, that this Agni had a son named Svana.

4) Satya (सत्य).—A hermit in the country of Vidarbha, This hermit who was a brahmin was a believer in ahiṃsā also. Once he performed a sacrifice without any killing. His wife Puṣkaradhāriṇī helped him in the sacrifice. Dharmadeva came there in the form of an antelope to test the non-killing principle of Satya. The animal came near Satya and said: "I am a deva (god) belonging to the Śukra-clan. I dwell in this forest as an antelope, due to the curse of Dharmadeva. Kill me and complete this sacrifice."

Though Satya heard this, he did not wish to kill the animal. At last the antelope decided to go and walked eight steps and then returned. Due to the delusive arts of the antelope Satya saw there celestial maids and the aeroplanes of Gandharvas. The antelope said that if he was killed he would attain heaven. A desire arose in Satya for killing and forthwith he lost all the attainments he got by penance. (Mahābhārata Śānti Parva. Chapter 272).

6) Satya (सत्य).—The son of Vitatya, born in the dynasty of the King Vītahavya. It is mentioned in Mahābhārata, Anuśāsana Parva, Chapter 30, Verse 62, that this Satya had a son called Santa.

8) Satyā (सत्या).—The wife of the Agni called Śaṃyu. So beautiful a woman as Satyā is said to have not existed in any of the three worlds. Bharadvāja was the son born to Śaṃyu by Satyā. Bharadvāja had three sisters. (Mahābhārata Vana Parva, Chapter 219, Verse 4).

9) Satya (सत्य).—A group of Devas (gods). This group of devas lived in the third Manvantara. The name of the then Manu was Uttama and the King of the devas was the Indra Suśānti. There were then five Devagaṇas (groups of Gods) each consisting of twelve devas. Those gaṇas were Sudhāmās, Satyas, Japas, Pratardanas and Vaśavartis. (Viṣṇu Purāṇa, Aṃśa 3, Chapter 1).

Satya (सत्य) or Satyaloka is the residence of Brahmā, according to the Śivapurāṇa 2.1.15:—“[...] O foremost among sages, I [viz., Brahmā] am staying in Satyaloka (Satya). O dear one, I desired the activity of creation (sṛṣṭi) at the bidding of Siva. Even as I stood desirous of creation, the Evil creation, viz. the set of five Illusions appeared before me. It was of the nature of darkness (tamas) endowed with knowledge”.

Note: [Satya] is one of the seven lokas of the upper region. The other six lokas are “bhūḥ, bhuvaḥ, svaḥ, mahaḥ, janaḥ, tapaḥ |”. For the sanctity and position of this loka compare an unidentified quotation from the Devī Bhāgavata.

1a) Satya (सत्य).—(Brahmaloka) see Satyaloka, one of the heavenly worlds above it, nīrāloka; six crores of yojanas above Tapoloka;1 residents of, do not return.2

1d) A Sudhāmāna god;1 the name of Viṣṇu born from Satyā in the Uttama epoch.2

1k) The name of Vyāsa in the second dvāpara.*

1l) One of the names for the third marut gaṇa.*

1m) A Rājaṛṣi becoming a Brahman.*

1p) A group of twelve Gods of the Uttama epoch;1 also of Tāmasa.2

1q) One of the seven heavenly worlds;1 Brahmaloka, the 7th loka; equal to Bhūloka in circumference; six crores of yojanas; in tapolokam; beyond is para and para at long distance;2 those who go there do not return and are rid of the saṃsāra wheel;3 after residing for several years they get one with the deity Nārāyaṇa.4

1r) A god of Ābhūtaraya group.*

1s) (Jayādevas) the gods of the epoch of Uttama Manu; twelve in number;1 all sons of Satyā and Uttama. These are the Yajñiyas of the Tāmasa epoch.2

2b) A queen of Manthu and the mother of Bhauvana.*

2d) The mother of Hari by name Satya (yajña) in the Uttama epoch.*

2f) A daughter of Śaibya, a queen of Bṛhanmanā and mother of Vijaya.*

2g) A daughter of Dakṣa and wife of Śiva.*

Satya (सत्य, “truth”).—In the Ayodhya-kāṇḍa in the course of rebutting a materialistic position which also denied scriptural authority, Rama is described as having said the following: “The universe is established in Truth. The highest Dharma is Truth. Truth is the lord of the Universe. All have their roots in Truth. There is no position or abode higher than Truth. The Vedas have their foundation in Truth (or, they have their glory due to it). ‘Vedaḥ satya-pratiṣṭhanaḥ’. Therefore, one should be devoted to Truth”. This implies the Veda teaches truth and hence its authority.

Satya (सत्य) refers to an aspect of nṛsiṃha (‘man-lion’), according to the Vihagendra-saṃhitā 4.17, which mentions seventy-four forms (inlcuding twenty forms of vyūha). He is also known as Satyanṛsiṃha or Satyanarasiṃha. Nṛsiṃha is a Tantric deity and refers to the furious (ugra) incarnation of Viṣṇu.

Satya (सत्य) or Satyasaṃhitā is the name of a Vaiṣṇava Āgama scripture, classified as a rājasa type of the Muniprokta group of Pāñcarātra Āgamas. The vaiṣṇavāgamas represent one of the three classes of āgamas (traditionally communicated wisdom).—Texts of the Pāñcara Āgamas are divided in to two sects. It is believed that Lord Vāsudeva revealed the first group of texts which are called Divya and the next group is called Muniprokta which are further divided in to three viz. a. Sāttvika. b. Rājasa (eg., Satya-saṃhitā). c. Tāmasa.

Satya (सत्य) refers to one of the forty-seven tānas (tone) used in Indian music.—The illustration of Satya (as a deity) according to 15th-century Indian art is as follows.—The colour of his body is yellow. His face is similar to the face of an elephant. His right hand is in Pravacana-Mudrā and a viṇā in his left hand.

The illustrations (of, for example Satya) are found scattered throughout ancient Jain manuscripts from Gujarat. The descriptions of these illustrations of this citrāvalī are based on the ślokas of Vācanācārya Gaṇi Sudhākalaśa’s Saṅgītopaniṣatsāroddhāra (14th century) and Śārṅgadeva’s Saṅgītaratnākara (13th century).

Satya (सत्य) refers to one of the 53 gods to be worshipped in the eastern quarter and given pāyasa (rice boiled in milk) according to the Vāstuyāga rite in Śaktism (cf. Śāradātilaka-tantra III-V). The worship of these 53 gods happens after assigning them to one of the 64 compartment while constructing a Balimaṇḍapa. Vāstu is the name of a prodigious demon, who was killed by 53 gods (eg., Satya).

Satya (सत्य) or Dvisatya refers to the “two truths” as defined in the Dharma-saṃgraha (section 95):

The Dharma-samgraha (Dharmasangraha) is an extensive glossary of Buddhist technical terms in Sanskrit (eg., satya). The work is attributed to Nagarjuna who lived around the 2nd century A.D.

Satyā (सत्या) is the wife of Marudeva, who is a kulakara (law-giver) according to Digambara sources, while Śvetāmbara names his wife as Śrīkāntā. The kulakaras (similair to the manus of the Brahmanical tradition) figure as important characters protecting and guiding humanity towards prosperity during ancient times of distress, whenever the kalpavṛkṣa (wishing tree) failed to provide the proper service.

These law-givers and their wifes (eg., Satyā) are listed in various Jain sources, such as the Bhagavatīsūtra and Jambūdvīpaprajñapti in Śvetāmbara, or the Tiloyapaṇṇatti and Ādipurāṇa in the Digambara tradition.

-tyaḥ 1 The abode of Brahman and of truth, the uppermost of the seven worlds or lokas above the earth; see लोक (loka).

5) A truism demonstrated truth of dogma.

6) The first of the four Yugas. or ages of the world, the golden age, the age of truth and purity.

(-tyaḥ) 1. Rama- Chandra. 2. The uppermost of the seven Lokas or worlds, the abode of Brahma, and heaven of truth. f.

Chapter 3 - The race of Dharma: three attributes of the self-born God < [Section 3 - Upodghāta-pāda]