Nrisimha means something in Buddhism, Pali, Hinduism, Sanskrit, Jainism, Prakrit, Marathi. If you want to know the exact meaning, history, etymology or English translation of this term then check out the descriptions on this page. Add your comment or reference to a book if you want to contribute to this summary article.

The Sanskrit term Nṛsiṃha can be transliterated into English as Nrsimha or Nrisimha, using the IAST transliteration scheme (?). 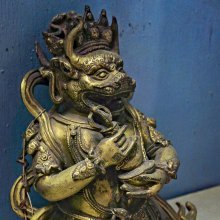 The Nrisimha stone is elevated on the breast, is of a twany colour, and is dotted with fine spots.

Nṛsiṃha (नृसिंह) refers to “(Viṣṇu’s form of the) Man-lion”, according to the Śivapurāṇa 2.3.14 (“The Birth of Tāraka and Vajrāṅga”).—Accordingly, as Brahmā narrated to Nārada: “[...] My son Marīci begot Kaśyapa who married thirteen daughters of Dakṣa. The eldest of them Diti bore two sons: Hiraṇyakaśipu the elder and Hiraṇyākṣa the younger. When these two began to harass the gods, Viṣṇu assumed the forms of Man-lion and Boar [i.e., nṛsiṃha-kroḍa-rūpatas] and killed them. Then the gods became fearless and happy”.

Nṛsiṃha (नृसिंह).—(Nṛhari and Narahari Narasimham (s.v.) half man and half lion avatār of Viṣṇu, worshipped as such in Harivarṣa;1 came out of a post which Hiraṇyakaśipu knocked with his fist; a description of his form and how he killed the demon;2 still his anger was not appeased; praised by Brahmā, Rudra, Indra, Sages, Pitṛs, Siddhas, Vidyādharas, Nāgas, progenitors, Gandharvas, Cāraṇas, Yakṣas, Kimpuruṣas, Vaitālikas, Kinnaras, and Viṣṇu's attendants;3 Śrī was afraid to go near him;4 at the request of the Gods Prahlāda praised the God for the welfare of the universe; offered boons to Prahlāda and advised him to rule his father's kingdom with his mind devoted to Hari until the time came for him to cast off his body;5 Brahmā's praise of the Lord's disappearance.6 God incarnate of Viṣṇu remembered by Śiva for vanquishing mātṛgaṇa;7 created from out of his limbs a number of goddesses who overcame the Rudra, mātṛgaṇas and were blessed with divinity.8

Nṛsiṃha (नृसिंह, “Man-lion form”):—One of the twenty-four forms of Viṣṇu through which Nārāyaṇa manifests himself. The meaning of this title is “The one who assumes the celestial man-lion form”. He is accompanied by a counterpart emanation of Lakṣmī (an aspect of Devī) who goes by the name Vidyutā.

Nṛsiṃha (नृसिंह) or Narasiṃha refers to one of the various Vibhava manifestations according to the Īśvarasaṃhitā 24.265-267.—Accordingly, “Lord Nārasiṃha, of a complexion of heated gold, is to be meditated upon. He is surrounded by the sparks of blazing fire rising from His body. He bears the discus and conch. He has a huge body and is very frightful. He is offering, with both hands resplendent with the rows of nails in His good hand, the supreme position with security to those who lead a regulated life”.

These Vibhavas (e.g., Nṛsiṃha) represent the third of the five-fold manifestation of the Supreme Consciousness the Pāñcarātrins believe in. Note: Nṛsiṃha is represented in several forms in the ancient texts like Viṣṇu-purāṇa and Bhāgavata and also in the Pāñcarātra texts like Hayaśīrṣasaṃhitā, Viṣṇutantra XVII.3b (white in complexion), seated or standing with more weapons, with sixteen hands holding several weapons (Padmasaṃhitā Kriyā XVII.22-41a), with a tail (ĪS IV.74b-75a), with three eyes and a Yogic posture (Pārāśara XV.160); seventy-four idols of various descriptions are mentioned (Vihagendrasaṃhitā IV.7-17a). The Vaikhānasa-āgama classifies Narasiṃha as issuing out of the hill and from the pillar. Sudarśana and Narasiṃha are combined in the same idol.

Nṛsiṃha (नृसिंह) refers to:—Avatāra of Śrī Viṣṇu in a half-man half-lion form. He killed the demoniac King Hiraṇyakaśipu, and saved his devotee Prahlāda; one the daśāvatāras, ten famous incarnations of the Lord. (cf. Glossary page from Śrī Bṛhad-bhāgavatāmṛta).

Nṛsiṃha (नृसिंह) [=Nṛsiṃhavana ?] refers to a country belonging to “Paścimottara (north-western division)” classified under the constellations of Uttarāṣāḍha, Śravaṇa and Dhaniṣṭhā, according to the system of Kūrmavibhāga, according to the Bṛhatsaṃhitā (chapter 14), an encyclopedic Sanskrit work written by Varāhamihira mainly focusing on the science of ancient Indian astronomy astronomy (Jyotiṣa).—Accordingly, “The countries of the Earth beginning from the centre of Bhāratavarṣa and going round the east, south-east, south, etc., are divided into 9 divisions corresponding to the 27 lunar asterisms at the rate of 3 for each division and beginning from Kṛttikā. The constellations of Uttarāṣāḍha, Śravaṇa and Dhaniṣṭhā represent the north-western division consisting of [i.e., Nṛsiṃha, Vanakha] [...]”.

Nṛsiṃha (नृसिंह, “man-lion”) is a Sanskrit word referring to one of the ten incarnations of Viṣṇu. This incarnation appeared in the satyayuga. Viṣṇu is the name of a major Hindu deity and forms part of the trinity of supreme divinity (trimūrti) together with Brahmā and Śiva. They are seen as the cosmic personifications of creation (brahmā), maintenance (viṣṇu), and destruction (śiva).

Nṛsiṃha (नृसिंह).—The Man-Lion incarnation of the Lord appears in various modes of action such as Emergence from the pillar, fight with Hiraṇya, Slaughter of Hiraṇya, Yoga Nrsiṃha (seated alone), Lakṣmī-Nṛsiṃha (seated with Lakṣmī) and a rare form called Aṣṭamukhagaṇḍabheruṇḍa-Nṛsiṃha. Nrsimha is the furious (ugra) aspect of Viṣṇu.

[«previous (N) next»] — Nrisimha in Mahayana glossary
Source: academia.edu: A Study and Translation of the Gaganagañjaparipṛcchā

Nṛsiṃha (नृसिंह) refers to the “Lion Among Men”, according to the Gaganagañjaparipṛcchā: the eighth chapter of the Mahāsaṃnipāta (a collection of Mahāyāna Buddhist Sūtras).—Accordingly, “[...] The Bodhisattva Gaganagañja then sustained the jewel-canopy of ten thousand yojanas high over the Lord’s lion throne in the sky, joined the palms of his hands, saluted, and praised the Lord with these suitable verses: ‘[...] (19) The Buddha who awakens living beings, transcends objectification (anālambana), and attains the nature of mind that is without mind, I pay homage to him. As all leaders (nāyaka) praise the Lion Among Men (nṛsiṃha), in that way, I praise the true qualities (bhūtaguṇa) because of suchness (tathatā). [...]”.

Nṛsiṃha (नृसिंह) is another name for Puruṣasiṃha: the fifth Vāsudeva (“violent heroes”) according to both Śvetāmbara and Digambara sources. Since they enjoy half the power of a Cakravartin (universal monarch) they are also known as Ardhacakrins. Jain legends describe nine such Vāsudevas usually appearing together with their “gentler” twins known as the Baladevas. The legends of these twin-heroes usually involve their antagonistic counterpart known as the Prativāsudevas (anti-heroes).

The parents of as Nṛsiṃha are known as king Śiva and queen Ammayā whose stories are related in texts such as the Triṣaṣṭiśalākāpuruṣacarita (“the lives of the sixty-three illustrious persons”), a twelfth-century Śvetāmbara work by Hemacandra.

The nine Vāsudevas (such as Nṛsiṃha) are also known as Nārāyaṇas or Viṣṇus and are further described in various Jain sources, such as the Bhagavatīsūtra and Jambūdvīpaprajñapti in Śvetāmbara, or the Tiloyapaṇṇatti and Ādipurāṇa in the Digambara tradition. The appearance of a Vāsudeva is described as follows: their body is of a dark-blue complexion, they wear a yellow robe made of silk, and they bear the śrīvatsa on their chest.

1) 'a lion-like man' a chief among men, an eminent or distinguished man.

(-haḥ) 1. Vishnu. 2. The fourth Avatara or descent of that deity, in the shape of a man, with the head and claws of a lion. 3. A chief, a noble, a great or illustrious man, a great man. E. nṛ a man, and siṃha a lion; applied in composition, also to signify preeminence.

Nṛsiṃha has the following synonyms: Narahari.

Nṛsiṃha has the following synonyms: Narahari.

Nṛsiṃha (ನೃಸಿಂಹ):—[noun] the fourth of the ten major incarnations of Viṣṇu, with the lion-head and human body.