Kalpavriksha means something in Hinduism, Sanskrit, Jainism, Prakrit, Marathi, Hindi, biology. If you want to know the exact meaning, history, etymology or English translation of this term then check out the descriptions on this page. Add your comment or reference to a book if you want to contribute to this summary article.

The Sanskrit term Kalpavṛkṣa can be transliterated into English as Kalpavrksa or Kalpavriksha, using the IAST transliteration scheme (?).

Alternative spellings of this word include Kalpvraksh. 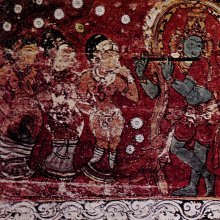 Kalpavṛkṣa (कल्पवृक्ष) refers to “wishing trees”.—There is the history of gardens and garden technology in early medieval India. By the eleventh century, the garden had long been a site dense with meaning in South Asia. It brought together earlier traditions of fabulous jewel trees (ratnavṛkṣas), wishing trees (kalpavṛkṣas), and wishing creepers (kalpalatās) that had decorated the railings of Buddhist stūpas and populated Buddhist heavens, with a whole series of architectural and design technologies like bowers, fountains, tanks, and fountain houses that had also become standard appurtenances of royal pleasure gardens by the seventh century

Kalpavṛkṣa (कल्पवृक्ष) refers to the “wish-yielding kalpa tree” and is used to describe Śiva, according to the Śivapurāṇa 2.2.42.—Accordingly, as Dakṣa bowed and eulogised Śiva:—“[...] Today I have realised the truth. Thou art above all. Thou art served by Viṣṇu, Brahmā and others. Thou art the supreme Being known only through the Vedas. Thou art the wish-yielding Kalpa tree (i.e., kalpavṛkṣa) to the good. Thou punishest the wicked always. Thou art the independent great soul. Thou art the bestower of desired boons on the devotees. [...]”.

Kalpavṛkṣa (कल्पवृक्ष).—A divine tree;1 gift of a golden tree, leads one to be born Rājarāja after a sojourn in viṣnuloka;2 gave clothes, jewels and honey in the kṛtayuga.3

Kalpavṛkṣa (कल्पवृक्ष) refers to “wish-fulfilling trees”, according to the Vedānta Deśika’s Yatirājasaptati.—There are allusions to Rāmānuja’s “protection” of the Vedas, his defeat of those who hold other Vedāntic views as well as the significance of his establishment of the right interpretation of the Vedas in innumerable verses of the Yatirājasaptati. [...] Verse 31 captures in a lovely set of images the nature of Rāmānuja’s works.They are wish-fulfilling trees (kalpavṛkṣa) for the imagination of debaters, oozing with the nectar of Hari’s feet, possessing many branches so that they can remove suffering/heat, and subduing (with their perfume) the stench of sins.

Kalpavṛkṣa (कल्पवृक्ष) is a Sanskrit word referring to “wish-fulfilling trees”.

Kalpavṛkṣa (कल्पवृक्ष).-Jains believe that at the upswing of each time cycle, masses will lose religious faith again. All wishes will be granted by wish-granting trees (Kalpavrksa), and individuals will be born in set of twins (yugalika) with one boy and one gril who stay together all their lives: a symbol of an integrated human with male and female features balanced.

Kalpavṛkṣa (कल्पवृक्ष) refers to “wishing trees”, according to the 11th century Jñānārṇava, a treatise on Jain Yoga in roughly 2200 Sanskrit verses composed by Śubhacandra.—Accordingly, “The wishing gem, divine treasure, cow of heaven, [and] wishing trees [com.—kalpavṛkṣa] along with Lakṣmī—I think these are servants existing from ancient times of the doctrine. The doctrine bestows upon embodied souls prosperity which is desired by Indra and the lords of men and snakes, and is to be revered in the three worlds”.

(-kṣaḥ) One of the fabulous trees of Indra'S heaven; a tree which yields whatever may be desired. E. kalpa purpose, and vṛkṣa a tree.

2) [noun] (fig.) a person who grants to another all that is wished for.

Verse 2.1.53 < [Chapter 1 - The Beginning of the Lord’s Manifestation and His Instructions on Kṛṣṇa-saṅkīrtana]

Verse 3.2.401 < [Chapter 2 - Description of the Lord’s Travel Through Bhuvaneśvara and Other Placesto Jagannātha Purī]