Vaishnavagama means something in Hinduism, Sanskrit. If you want to know the exact meaning, history, etymology or English translation of this term then check out the descriptions on this page. Add your comment or reference to a book if you want to contribute to this summary article.

The Sanskrit term Vaiṣṇavāgama can be transliterated into English as Vaisnavagama or Vaishnavagama, using the IAST transliteration scheme (?). 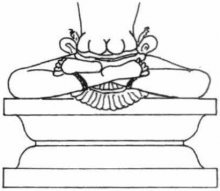 Vaiṣṇavāgama (वैष्णवागम) represents one of the three classes of āgamas (traditionally communicated wisdom).—The Vaiṣṇavāgamas preach us the right behaviour, knowledge about the divine states and manner of obtaining them, and about the glory of God and reality (definitions found in this school treat āgama as a śāstra). Vaiṣṇavāgamas are predominantly divided in to two sects, they are Vaikhānasa and Pāñcarātra.

The Vaishnava Agamas are found into two main schools -- Pancharatra and Vaikhanasas. While Vaikhanasa Agamas were transmitted from Vikhanasa Rishi to his disciples Brighu, Marichi, Atri and Kashyapa, the Pancharatra Agamas are considered to be revealed and handed down in three ways --

Vaiṣṇavāgama (ವೈಷ್ಣವಾಗಮ):—[noun] the science or technical details of construction of Viṣṇu temples, carving and worshipping of Viṣṇu idols.

The āgamas and their number < [Introduction]

5.2. Classification of the Āgamas < [Chapter 1 - Introduction]

Chapter III - What are the Tantras and their significance? < [Section 1 - Introductory]