Satyabhama means something in Hinduism, Sanskrit, Jainism, Prakrit. If you want to know the exact meaning, history, etymology or English translation of this term then check out the descriptions on this page. Add your comment or reference to a book if you want to contribute to this summary article. 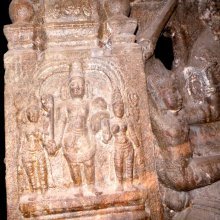 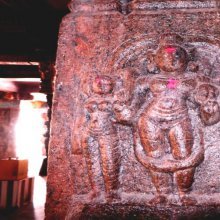 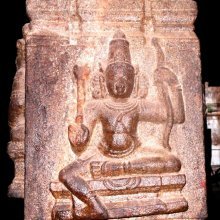 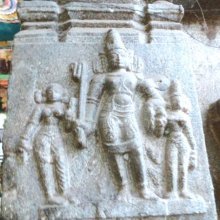 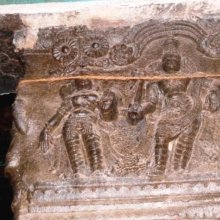 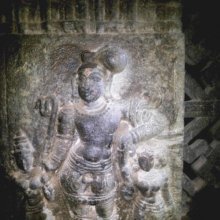 Satyabhāmā (सत्यभामा).—One of the principal queens of Lord Kṛṣṇa during His pastimes in the city of Dvārakā.

Satyabhāmā (सत्यभामा).—The wife of Śrī Kṛṣṇa. Introduction. Once Śrī Kṛṣṇa himself said about the previous birth of Satyabhāmā. There was an occasion for saying that. (See full article at Story of Satyabhāmā from the Puranic encyclopaedia by Vettam Mani)

Satyabhāmā (सत्यभामा).—(see Satyā) a daughter of Satrājit (Bhangakāra, Matsya-purāṇa). The latter had mistakenly suspected Kṛṣṇa of having murdered his brother, and to make amends, gave his daughter in marriage to Kṛṣṇa though Akrūra and others had sought her hand before. Mother of 6 sons and 4 daughters among whom were Bhānu and Bhaumarikā. Terrified at the murder of her father by1 Śatadhanvan (s.v.) she caused the dead body to be preserved in oil and went to Hāstinapuram to inform Kṛṣṇa. Saw Syamantaka with Akrūra and coveted it. Welcomed to Indraprastha by Draupadī;2 narrated to her the circumstances under which she married Kṛṣṇa;3 went with Kṛṣṇa during his expedition to Naraka's city, and then to Indra's abode. Embraced and blessed by Aditī; complained to Kṛṣṇa that Indrāṇī did not accord her proper welcome and insisted on the Pārijāta being taken to Dvārakā. Defeated Kubera who attracted her husband and was praised by Kṛṣṇa for her valour;4 observed Kalyāṇini vratam;5 took away the Pārijāta; Indra fought for it but was defeated; Satyabhāmā gave it back to him saying that she wanted to teach a lesson to Indrāṇī; returned to Dvārakā with the Pārijāta presented by Indra.6

Satyabhāmā (सत्यभामा) or Satyā is the daughter of Jambukā and Satyaki who became the wife of Kapila (son of Dharaṇījaṭa), according to chapter 5.1 [śāntinātha-caritra] of Hemacandra’s 11th century Triṣaṣṭiśalākāpuruṣacaritra (“lives of the 63 illustrious persons”): a Sanskrit epic poem narrating the history and legends of sixty-three important persons in Jainism.

Accordingly, “[...] at an auspicious moment Satyaki married Satyabhāmā and Kapila with suitable ceremonies. Honored by the citizens in all the city as much as Satyaki, daily he (Kapila) enjoyed pleasures with good-tempered Satyabhāmā. The people gave him special money, rice, etc, on all the festival-days, thinking, ‘He is more to be honored even than Satyaki’. Living in this way. best of living Brāhmans, Kapila became well-endowed with money as well as good qualities.”.

Satyabhāmā (सत्यभामा).—Name of the daughter of Satrājit and the favourite wife of Kṛṣṇa; (it was for her that Kṛṣṇa fought with Indra and brought the Pārijāta tree from the Nandana garden and planted it in her garden).

Satyabhāmā (सत्यभामा):—[=satya-bhāmā] [from satya > sat] f. ‘having true lustre’, Name of a daughter of Satrā-jit and one of the eight wives of Kṛṣṇa (she is described as having promoted the quarrels of the Yādavas), [Mahābhārata; Harivaṃśa; Purāṇa etc.]

The Taking of Parijata < [Fifth Section]

The Killing of Narakasura < [Fifth Section]

Verse 2.9.213 < [Chapter 9 - The Lord’s Twenty-One Hour Ecstasy and Descriptions of Śrīdhara and Other Devotees’ Characteristics]

Verse 3.4.389 < [Chapter 4 - Descriptions of Śrī Acyutānanda’s Pastimes and the Worship of Śrī Mādhavendra]