Stri means something in Buddhism, Pali, Hinduism, Sanskrit, Jainism, Prakrit, Marathi, Hindi. If you want to know the exact meaning, history, etymology or English translation of this term then check out the descriptions on this page. Add your comment or reference to a book if you want to contribute to this summary article.

The Sanskrit terms Stṝ and Stṛ and Śtrī can be transliterated into English as Str or Stri or Shtri, using the IAST transliteration scheme (?). 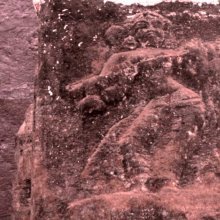 Strī (स्त्री) refers to “beautiful women”, mentioned as one of the potential rewards of Śiva-worship, according to the Śivapurāṇa 2.1.12:—“[...] those who desire magnificent buildings, beautiful ornaments, beautiful women (strī), wealth to satiety, sons and grandsons, health, splendid body, extraordinary status, heavenly happiness and final salvation or profound devotion to the great lord shall duly worship Śiva by virtue of their merit accumulated by them. Sure success will be his who regularly worships Śiva liṅga with great devotion. He will never be afflicted by sins”.

Strī (स्त्री).—Origin. In both Hindu and Christian scriptures, the story about the origin of woman appears to be similar. It is stated in Manusmṛti, Chapter 1, Verse 32, that Brahmā divided his body into two and made one part male and the other part female and the male embraced the female, from which union was born the Virāṭpuruṣa. (See full article at Story of Strī from the Puranic encyclopaedia by Vettam Mani)

1a) Strī (स्त्री).—The region of adharma, and of Kali;1 duties and behaviour of; to be avoided by a Brahmacārin;2 becomes Keśaśūla in Kali; more women than men; unfit for rule, if there were no husband;3 killing a woman a heinous crime; Hari cursed to be born on earth for having slain Bhṛgu's wife.4 No śīla or vrata; but fond of wine and meat in the Kali age;5 conditions making her unfit for intercourse;6 to be honoured and not to be fully confided.7

1b) In Kali age; personal charm in the possession of hair; deserts her husband for power; a wealthy man, considered as husband; fickle, short of stature, and gluttonous, speaks lies, is indecent and immoral; child bearing at the age of 5 or 6;1 by honouring her husband she is elevated.2

Strī (स्त्री) refers to “women” who have dealings with the king whose classes have been defined on the Nāṭyaśāstra chapter 34.

The classes and functions of women (strī) who have dealings with the king are:

These in brief are the different classes women of the royal harem.

Women who have the nature of various animals are of three classes:

1) Śtrī (श्त्री) refers to one of the 135 metres (chandas) mentioned by Nañjuṇḍa (1794-1868 C.E.) in his Vṛttaratnāvalī. Nañjuṇḍa was a poet of both Kannada and Sanskrit literature flourished in the court of the famous Kṛṣṇarāja Woḍeyar of Mysore. He introduces the names of these metres (e.g., Śtrī) in 20 verses.

2) Strī (स्त्री) refers to one of the 130 varṇavṛttas (syllabo-quantitative verse) dealt with in the second chapter of the Vṛttamuktāvalī, ascribed to Durgādatta (19th century), author of eight Sanskrit work and patronised by Hindupati: an ancient king of the Bundela tribe (presently Bundelkhand of Uttar Pradesh). A Varṇavṛtta (e.g., strī) refers to a type of classical Sanskrit metre depending on syllable count where the light-heavy patterns are fixed.

Strī (स्त्री) refers to the “pleasure of women”, which is considered as very harmful (kaṣṭatama), according to the Manusmṛti 7.50. Accordingly, “[...] in the set arising from love of pleasure (kāmaja),—drinking (pāna), dice (akṣa), women (strī) and hunting (mṛgayā) are to be regarded as the four most pernicious (kaṣṭatama), in the order in which they are named”.

Strī (‘women’) and Mada (‘intoxication’)—The fact of these two being evils is well known.

Strī (स्त्री) refers to a “woman”, according to the Bṛhatsaṃhitā (chapter 2), an encyclopedic Sanskrit work written by Varāhamihira mainly focusing on the science of ancient Indian astronomy astronomy (Jyotiṣa).—Accordingly, “A true Astrologer is also one who has thoroughly mastered the Science of Saṃhitā. [...] It also treats of the prediction of events from the flight of the kañjana and from the appearance of various abnormal phenomena, of expiatory ceremonies; of miscellaneous planetary phenomena; of ghṛta-kambala; of the royal sword; of paṭa; of the features of a house cock, a cow, a sheep, a horse, an elephant, a man and a woman [i.e., strī]. It also treats of the treatment of women; of moles in the body; of injuries to shoes and clothes; of hairy fans; of walking sticks: of beds and seats; of lamplight; of tooth brush and the like”.

Strī (स्त्री) is the Sanskrit word referring to “woman” or “female” in general, as opposed to Puṃs, which refers to “man” or “male”.

1) Stṛ (स्तृ) (used in the instrumental plural only) denotes the ‘stars’ of heaven.

2) Strī (स्त्री) is the ordinary word in poetry and prose for ‘woman’, without special reference to her as a wife or as a maiden. Nārī has the same sense, but disappears in later prose, while Gnā refers only to the wives of the gods, and Yoṣit, with its cognate words, denotes the young woman as ripe for marriage. In the Rigveda Strī stands opposed to Pumāṃs, ‘man’, and once to vṛṣan, ‘male person’; not until the Atharvaveda does it mean ‘wife’ as opposed to Pati, ‘husband’, and even in the Sūtras it is sharply opposed to Jāyā.

Strī (स्त्री, “woman”) or Strīratna refers to the “woman jewel” and represents the fifth of the “seven jewels of universal monarchs” (saptaratna) as defined in the Dharma-saṃgraha (section 85). The Dharma-samgraha (Dharmasangraha) is an extensive glossary of Buddhist technical terms in Sanskrit (e.g., strī). The work is attributed to Nagarjuna who lived around the 2nd century A.D.

Strī (स्त्री, “woman”).—One of the fourteen gems (ratna) serving the Cakravartin;—Strī is a most beautiful woman, eternally young, warm at touch in cold season and cool in hot season, energising the husband constantly to new pleasure by her look and driving away disease by her touch.

Strī (स्त्री, “women”) refers to one of the  hardships (parīṣaha), or “series of trials hard to endure” according to the Triṣaṣṭiśalākāpuruṣacaritra 10.1 (Incarnation as Nandana). While practicing penance for a lac of years, Muni Nandana also endured a series of trials hard to endure (e.g., strī). Nandana is the name of a king as well as one of Mahāvīra’s previous births.

3) To scatter, spread about.

—to spread, spread out or about, strew, scatter ([especially] the sacrificial grass; in this sense in older language only [class] 9. [Ātmanepada] [Parasmaipada]), [Ṛg-veda; Atharva-veda; Brāhmaṇa; ???; Rāmāyaṇa];

—to spread, spread out or about, strew, scatter ([especially] the sacrificial grass; in this sense in older language only [class] 9. [Ātmanepada] [Parasmaipada]), [Ṛg-veda; Atharva-veda; Brāhmaṇa; ???; Rāmāyaṇa];

11) the female of any animal (e.g. śākhā-mṛga-strī, ‘a female monkey’), [Śatapatha-brāhmaṇa; Mahābhārata]

14) (in gram.) the feminine gender, [Nirukta, by Yāska; Śatapatha-brāhmaṇa] etc.

1) [noun] an adult female human being.

4) [noun] any of an order (Isoptera) of pale-coloured social insects having a soft body and living in colonies composed of winged forms that mate and wingless workers and soldiers that are usu. sterile or immature; a white ant; a termite.

6) [noun] (gram.) a word that is designated as belonging to the gender of words denoting or referring to, females; feminine gender.

Chapter 74 - On the praise of Women (strī-praśaṃsā)