Shridhara means something in Hinduism, Sanskrit, Jainism, Prakrit, the history of ancient India. If you want to know the exact meaning, history, etymology or English translation of this term then check out the descriptions on this page. Add your comment or reference to a book if you want to contribute to this summary article.

The Sanskrit terms Śrīdharā and Śrīdhara can be transliterated into English as Sridhara or Shridhara, using the IAST transliteration scheme (?). 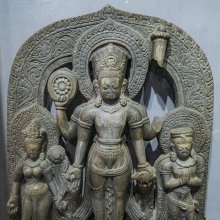 A Sridhara stone has the marks of five lines, that of a garland of forest flowers and that of a club.

Śrīdhara (श्रीधर, “The bearer of Śrī who listens-to-prayers”):—One of the twenty-four forms of Viṣṇu through which Nārāyaṇa manifests himself. He is accompanied by a counterpart emanation of Lakṣmī (an aspect of Devī) who goes by the name Medhā.

Śrīdhara (श्रीधर) refers to a type of temple (prāsāda) classified, according to Samarāṅgaṇasūtradhāra chapter 57. The temple is mentioned as one of the nine temples being a favorite of Bhagavatī. The Samarāṅgaṇasūtradhāra is an 11th-century encyclopedia dealing with various topics from the Vāstuśāstra.

Śrīdhara is found in another list in the Samarāṅgaṇasūtradhāra, chapter 60, where it is mentioned in a list of thirty-six Prāsādas (temples) having activities of the townsmen entailing Sādhārās.

Śrīdharā (श्रीधरा) refers to a type of syllabic metre (vṛtta), according to the Nāṭyaśāstra chapter 16. In this metre, the first four, the tenth, the eleventh, the thirteenth, the fourteenth and the seventeenth syllables of a foot (pāda) are heavy (guru), while the rest of the syllables are light (laghu). It is also known by the name Mandākrāntā.

Śrīdhara (श्रीधर) refers to one of the many varieties of the Śālagrāma (ammonite fossil stones).—The Śrīdhara stone is very small in size (ati-kṣudra) and shape of a kadamba flower, five lines suggesting vanamālā and mace; two cakras. Śālagrāma stones are very ancient geological specimens, rendered rounded and smooth by water-currents in a great length of time. They (e.g., Śrīdhara stones) are distinguished by the ammonite (śālā, described as “vajra-kīṭa”, “adamantine worms”) which having entered into them for residence, are fossilized in course of time, leaving discus-like marks inside the stone.

Śrīdhara (श्रीधर).—A grammarian of the last century who has written a commentary named श्रीधरी (śrīdharī) after him, on the Paribhasendusekhara.

1) Śrīdhara (श्रीधर) is the name of a Brāhman, according to the Kathāsaritsāgara, chapter 58. Accordingly, as Kumidikā said to king Vikramasiṃha: “... I have an affection for a Brahman's son, of the name of Śrīdhara, in Ujjayinī, whom the king has thrown into prison for a very small fault, so deliver him out of the king’s hand”.

2) Śrīdhara (श्रीधर) is the name of a Brāhman from Mālava, according to the Kathāsaritsāgara, chapter 63. Accordingly, “... there was a famous Brāhman in Mālava, named Śrīdhara, and twin sons, of like feature, were born to him. The elder was named Yaśodhara, and his younger brother was Lakṣmīdhara. And when they grew up, the two brothers set out together for a foreign country to study, with the approval of their father...”.

3) Śrīdhara (श्रीधर) is the son of Mahīdhara, chaplain (purodhas) of king Mahendrāditya from Avanti, according to the Kathāsaritsāgara, chapter 120. Accordingly, as sage Kaṇva narrated to Naravāhanadatta: “... When some more days had passed, there was born to that king’s minister named Sumati a son, of the name of Mahāmati, and the warder Vajrāyudha had a son born to him, named Bhadrāyudha, and the chaplain Mahīdhara had a son of the name of Śrīdhara. And that prince Vikramāditya grew up with those three ministers’ sons as with spirit, courage and might”.

The Kathāsaritsāgara (‘ocean of streams of story’), mentioning Śrīdhara, is a famous Sanskrit epic story revolving around prince Naravāhanadatta and his quest to become the emperor of the vidyādharas (celestial beings). The work is said to have been an adaptation of Guṇāḍhya’s Bṛhatkathā consisting of 100,000 verses, which in turn is part of a larger work containing 700,000 verses.

Śrīdhara (श्रीधर).—Another important commentary on Praśastapāda’s Bhāṣya is Nyāyakaṇḍalī written by Śrīdhara. According to his own proof, he flourished in 991 A.D.68 He was a native of the village of Bhurisṛsti in Bengal. Gopinath Kaviraj mentions that Śrīdhara wrote four works. These are: Advayasiddhi, a Vedāntic work, Tattvaprabodha, a Mīmāṃsā work Tattvasaṃvādinī and Nyāya-Kaṇḍalī.

Śrīdhara accepts the existence of God and the category of non-existence. He again mentions in his work that Yogins get knowledge through their internal organ. He made clear Praśastapāda’s view of the relation between an instrument of knowledge and its result. Perception is also an instrument of knowledge. In this work, detailed discussion of the seven categories is found. In the conclusion he states the name of the village in which he lived, the names of his parents and the date of the composition of his work

He was known for two treatises: Trisatika (sometimes called the Patiganitasara) and the Patiganita. His major work Patiganitasara was named Trisatika because it was written in three hundred slokas. The book discusses counting of numbers, measures, natural number, multiplication, division, zero, squares, cubes, fraction, rule of three, interest-calculation, joint business or partnership and mensuration.

The mathematical works of Śrīdhara were very popular and made him quite famous. In spite of his great popularity, some controversies have been raised about his life, work, and time, such as whether he was a Hindu or a Jaina, and whether he wrote before or after Mahāvīra (ninth century AD). Some uncertainties exist because Śrīdhara's works are not fully extant. Often he is confused with other authors of the same name.

Like so many ancient Indian authors, Śrīdhara did not provide any information about himself in his works. Other sources have not been helpful in finding any glimpse of his personal life. So we do not know his parents or teachers, or even where he was born, educated, or worked. But some evidence shows that he was a Saivite Hindu. An example in his Pāṭīgaṇita is about the payment for the worship of the five‐faced Hindu god Śiva. He starts his Triśatikā with a homage to the same god.

Śrīdhara (श्रीधर) is the name of an ancient king from Vijayapura, according to chapter 4.2 [vāsupūjya-caritra] of Hemacandra’s 11th century Triṣaṣṭiśalākāpuruṣacaritra (“lives of the 63 illustrious persons”): a Sanskrit epic poem narrating the history and legends of sixty-three important persons in Jainism.

Accordingly:—“Vindhyaśakti wandered in existence for a long time, adopted Jain garb in one birth, died, and became a kalpa-god. When he fell, he was born the son, Śrīmant Tāraka, of King Śrīdhara by his wife Śrīmatī in Vijayapura. [...]”.

Śrīdhara (श्रीधर).—Ārya Śrīdhara was Pārśvanātha’s sixth Gaṇadhara. His father’s name was Nāgabala and mother's name was Mahāsundarī. He got married to king Prasenajita’s daughter Rājamatī. Remembering his past birth and the untimely death of his younger brother became the prime reasons for his taking initiation.

[«previous (S) next»] — Shridhara in India history glossary
Source: What is India: Inscriptions of the Śilāhāras

Śrīdhara Paṇḍita (fl. 1095 A.D.) is mentioned in the “Kharepāṭaṇ plates of Anantadeva I”. Accordingly, “This (grant) was secured by Śrīdhara Paṇḍita, the door-keeper of the king, by propitiateing the Kuṅkaṇa-Chakravartin, the illustrious Anantadeva”.

These copper plates (mentioning Śrīdhara) were in the possession of Mr. Ramachandra Sivram Desai of Khārepāṭaṇ in Ratnāgiri District, Mahārāṣṭra. It is dated on the first tithi of the bright fortnight of Māgha in the Śaka year 1016, the cyclic year being Bhāva.

1) Śrīdhara (श्रीधर):—[=śrī-dhara] [from śrī] m. ‘bearer or possessor of fortune’, Name and a form of Viṣṇu, [Mahābhārata; Harivaṃśa; Purāṇa]

3) [v.s. ...] of the seventh Arhat of the past Utsarpiṇī, [cf. Lexicographers, esp. such as amarasiṃha, halāyudha, hemacandra, etc.]

2) [noun] Śiva, who has adorned his head with the crescent moon.

Part 2: Episode of Vidyudaṅga < [Chapter V - The kidnapping of Sītā]

Canto XLVII - The Creation from Prakṛti and the Vikāras

Verse 2.9.168 < [Chapter 9 - The Lord’s Twenty-One Hour Ecstasy and Descriptions of Śrīdhara and Other Devotees’ Characteristics]

Verse 2.9.197 < [Chapter 9 - The Lord’s Twenty-One Hour Ecstasy and Descriptions of Śrīdhara and Other Devotees’ Characteristics]