Kshama means something in Buddhism, Pali, Hinduism, Sanskrit, Jainism, Prakrit, Marathi, Hindi. If you want to know the exact meaning, history, etymology or English translation of this term then check out the descriptions on this page. Add your comment or reference to a book if you want to contribute to this summary article.

The Sanskrit terms Kṣamā and Kṣama and Kṣāma can be transliterated into English as Ksama or Kshama, using the IAST transliteration scheme (?). 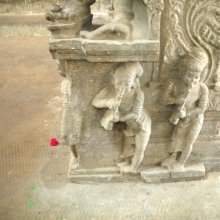 Kṣamā (क्षमा, “patience”):—Name of one of the sixty-four mātṛs to be worshipped during Āvaraṇapūjā (“Worship of the Circuit of Goddesses”, or “Durgā’s Retinue”), according to the Durgāpūjātattva. They should be worshipped with either the five upācāras or perfume and flowers.

A similar mantra is mentioned by the same text, prefixed with ह्रीं (hrīṃ), to be worshipped at the goddess’s right.

Kṣamā (क्षमा, “forgiveness”):—One of the names attributed to Devī, as chanted by the Vedas in their hymns, who were at the time incarnated in their personified forms. See the Devī-bhāgavata-purāṇa chapter 5.51-68, called “the narrative of Hayagrīva”.

Kṣāma (क्षाम) refers to “thin” (e.g., one having a thin stomach), according to the Kularatnoddyota, one of the earliest Kubjikā Tantras.—Accordingly, “[...] (The gross form has) five faces, ten arms and, pure, it has a smiling face. [...] Her stomach is thin [i.e., kṣāma-udarā], navel, deep set and thighs large. (Her) hips and knees are very soft. She has beautiful thighs and red finger (nails) that are very beautiful. She (wears) beautiful cloths, a divine garland and an excellent shawl. (She wears) a necklace made of large gems, bangles on her limbs, anklets and a blazing diadem of rubies (māṇikya). O supreme mistress, adorned with divine rings (on her fingers), she sits on a svastika (as her) seat”.

Kṣamā (क्षमा, “forgiveness”):—One of the twenty-four emanations of Lakṣmī accompanying Nārāyaṇa. This particular manifestation couples with his counterpart form called Upendra and together they form the twentieth celestial couple. Lakṣmī represents a form of the Goddess (Devī) as the wife of Viṣṇu, while Nārāyaṇa represents the personification of his creative energy, according to the Pāñcarātra literature.

Source: Universität Wien: Sudarśana's Worship at the Royal Court According to the Ahirbudhnyasaṃhitā

Kṣama (क्षम) refers to “one who is capable” (of warding off misdeeds), according to the Ahirbudhnyasaṃhitā, belonging to the Pāñcarātra tradition which deals with theology, rituals, iconography, narrative mythology and others.—Accordingly, “Such a Court Officiant who is [himself] like a Guru to Kings is difficult to find. Such a one is verily capable (kṣama) of warding off the flood of misdeeds [and their consequences] for Kings. Therefore, he alone is able to perform the rituals of protection of Kings. He who has such a Guru [by his side] shall become a sovereign King, one with a long life, one free of enemies and diseases and a slayer of hostile heroes”.

Kṣamā (क्षमा) is one of the twenty-four daughters of Dakṣa by Prasūti: one of the three daughters of Svāyambhuvamanu and Śatarūpā, according to the Śivapurāṇa 2.1.16:—“Dakṣa begot twenty-four daughters. The eleven younger daughters were [... Kṣamā,...]. The great aspirants [Pulaha] and others took the hands of these famous daughters (e.g., Kṣamā married Pulaha). Thereupon the entire universe consisting of three worlds, mobile and immobile was filled (with progeny). Thus according to their own actions and at the bidding of Śiva innumerable famous Brahmins were born out of the various living beings”.

1) Kṣāma (क्षाम, “depressed”) refers to a specific gesture (āṅgika) made with the cheeks (kapola or gaṇḍa), according to the Nāṭyaśāstra chapter 8. These gestures form a part of the histrionic representation (abhinaya).

2) Kṣāma (क्षाम, “thin”) refers to a specific gesture (āṅgika) made with the belly (udara), according to the Nāṭyaśāstra chapter 10. These gestures form a part of the histrionic representation (abhinaya).

3) Kṣāma (क्षाम, “thinness”) represents the first stage of the action of poison (viṣa) after drinking it, according to the Nāṭyaśāstra chapter 26. It is also known by the name Kārśya. In a dramatic play, the representation of death from drinking poison is displayed by throwing out of hands and feet and other limbs. The power of the poison will lead to the quivering action of the different parts of the body.

Kṣāma according to the Nāṭyaśāstra: “eyes with sunken eyeballs, depressed cheeks, lips, and thinness of the belly and of the shoulder and of arms will represent thinness (kṣāma)”.

Kṣamā (क्षमा) refers to one of the 135 metres (chandas) mentioned by Nañjuṇḍa (1794-1868 C.E.) in his Vṛttaratnāvalī. Nañjuṇḍa was a poet of both Kannada and Sanskrit literature flourished in the court of the famous Kṛṣṇarāja Woḍeyar of Mysore. He introduces the names of these metres (e.g., Kṣamā) in 20 verses.

Kṣamā (क्षमा) refers to “earth” and is mentioned in a list of 53 synonyms for dharaṇi (“earth”), according to the second chapter (dharaṇyādi-varga) of the 13th-century Raj Nighantu or Rājanighaṇṭu (an Ayurvedic encyclopedia).  The Dharaṇyādi-varga covers the lands, soil [viz., Kṣamā], mountains, jungles and vegetation’s relations between trees and plants and substances, with their various kinds.

[«previous (K) next»] — Kshama in Tibetan Buddhism glossary
Source: academia.edu: The Structure and Meanings of the Heruka Maṇḍala

Kṣamā (क्षमा) is the name of a Ḍākinī who, together with the Vīra (hero) named Kṣemacinta forms one of the 36 pairs situated in the Vākcakra, according to the 10th century Ḍākārṇava chapter 15. Accordingly, the vākcakra refers to one of the three divisions of the nirmāṇa-puṭa (emanation layer’), situated in the Herukamaṇḍala. The 36 pairs of Ḍākinīs [viz., Kṣamā] and Vīras are reddish madder in color; they each have one face and four arms; they hold a skull bowl, a skull staff, a small drum, and a knife.

[«previous (K) next»] — Kshama in Jainism glossary
Source: The University of Sydney: A study of the Twelve Reflections

Kṣamā (क्षमा) refers to “tolerance” (of anger), according to the 11th century Jñānārṇava, a treatise on Jain Yoga in roughly 2200 Sanskrit verses composed by Śubhacandra.—Accordingly, “Tolerance (kṣamā) of anger and humility towards pride, moreover straightforwardness towards deception [and] abandonment of attachment, these are the enemies of desire respectively. Yogis continually drive away desire and dislike through equanimity or through the state of non-attachment , and they drive away wrong faith through the application of right faith”

-maḥ An epithet of Viṣṇu.

2) [adjective] having enough power, skill, talent, etc. to do something.

1) [noun] the quality or fact of being abnormally thin; thinness.

3) [noun] prolonged lack of something.