Madhya means something in Buddhism, Pali, Hinduism, Sanskrit, the history of ancient India, Marathi, Hindi. If you want to know the exact meaning, history, etymology or English translation of this term then check out the descriptions on this page. Add your comment or reference to a book if you want to contribute to this summary article.

Alternative spellings of this word include Madhy. 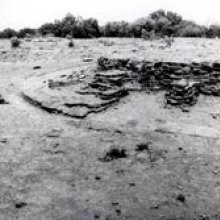 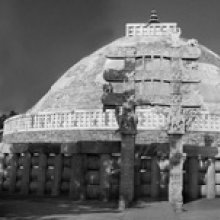 Madhya (मध्य, “central zone”):—One of the six types of habitats (deśa).—These geographical habitats are divided according to their bhūtas. Jāṅgala has a predominance of Vāta and Pitta. Skilled physicians should account for the nature of the habitat when treating a patient. The word is used throughout Ayurvedic (India medicine) literature such as the Caraka-saṃhitā and the Suśruta-saṃhitā.

1) Madhya (मध्य, “middle”) refers to one of the three sizes of playhouse (nāṭyamaṇḍapa) used, according to the Nāṭyaśāstra 2.8-11. This size is stated to be meant for kings (the other sizes being meant for Gods or humans). The measurement of the jyeṣṭha type playhouse is stated to count 64 hastas (also translated as ‘cubit’; one hasta equals 24 aṅgulas). They can also be measured using the same amount of daṇḍas (one daṇḍa equals 4 hastas).

2) Madhyā (मध्या) refers to a class of rhythm-type (chandas) containing three syllables in a pāda (‘foot’ or ‘quarter-verse’), according to the Nāṭyaśāstra chapter 15. There are twenty-six classes of chandas and out of them arise the various syllabic meters (vṛtta), composed of four pādas, defining the pattern of alternating light and heavy syllables.

3) Madhya (मध्य, “medium”) refers to one of the three tempos (laya) according to the Nāṭyaśāstra chapter 31. Accordingly, “the totality of syllables penultimate to the yati, will indicate the tempo, and from the tempo the measure of these will change. A decrease of kalās should be made in other pāṇis. In the slow tempo, there should be one sannipāta, in the medium tempo two sannipātas, and in the quick tempo the number of sannipātas should be four. That which is indicated by this difference, is called the quick and the medium tempo, and the avapāṇi is dependent on a medium tempo. When the tālas of one kalā become the antarakalā played in quick tempo, then it is called the uparyuparipāṇi”.

4) Madhya (मध्य) or Rajanī is the name of a meter belonging to the Vṛtta (syllabic) class of Dhruvā (songs) described in the Nāṭyaśāstra chapter 32:—“when the two syllables are short and one long in the triad of its feet, the metre is rajanī”.

Madhya (मध्य) or Madhyanāyikā refers to an “adolescent and partly experienced heroine”, of the Svakīya type and represents one of the three kinds of “heroines” (nāyikā) in a dramatic representation, according to the Abhinaya-sara-samputa, as used within the classical tradition of Indian dance and performance, also known as Bharatanatyam.—In the depiction of any mood or sentiment, a dance performance or a dramatic representation takes the medium of the hero (nāyaka) and the heroine (nāyikā). The heroine is called svakīya when she possesses good character and is upright. She is again classified into three types [viz., Mugdha-nāyikā].

The heroine of the Madhya type is divided into three types: laghu (light annoyance or fury on seeing other women), madhya (medium indignation on hearing the name of another women), and guru (intense anger on seeing the marks of another woman’s love for her lover). There are three activities of the nāyika in this indignation: dhīra (a self-controlled heroine who greets her deceitful lover with sarcastic words), dhīradhīra (partly self-controlled heroine, who rebukes her lover in tears), and adhīra (the heroine who lacks self-control and scolds her lover harshly).

Madhya (मध्य, “medium”).—Illustration of madhya-grāma (mediocre group of tones) according to 15th century art.—The colour of the body of madhya-grāma is golden-yellow. He holds a vīṇā (Indian lute) with both hands. The colour of the scarf is rosy with red dots and the lower garment is green with a black design. He is well-dressed and tastefully ornamented.

The illustrations (of, for example Madhya) are found scattered throughout ancient Jain manuscripts from Gujarat. The descriptions of these illustrations of this citrāvalī are based on the ślokas of Vācanācārya Gaṇi Sudhākalaśa’s Saṅgītopaniṣatsāroddhāra (14th century) and Śārṅgadeva’s Saṅgītaratnākara (13th century).

Madhyā (मध्या) is one of the twenty-six varieties of Sanskrit metres (chandas) mentioned in the Chandaśśāstra 1.15-19. There are 26 Vedic metres starting with 1 to 26 letters in each pāda. It is a common belief that the classical metres are developed from these 26 metres. Generally a metre has a specific name according to it’s number of syllables (akṣara). But sometimes the same stanza is called by the name of another metre from the point of view of the pādas.

Madhya (मध्य, “hundred-million”) is the ninth of sixty digits (decimal place) in an special enumeration system mentioned by Vasubandhu in his Abhidharmakośa (“treasury of knowledge”). The explanations of the measure of years, eons, and so forth must be comprehended through calculation based on a numerical system. Enumeration begins from one and increases by a factor of ten for each shift in decimal place. The sixtieth number in this series is called “countless”.

Among these decimal positions (e.g., madhya, “hundred-million”), the first nine positions from one to one hundred million are called ‘single set enumeration’. From a billion up to, but not including countless is “the enumeration of the great companion” and is called the ‘recurring enumeration’.

Madhya.—(CII 1), middle course. Note: madhya is defined in the “Indian epigraphical glossary” as it can be found on ancient inscriptions commonly written in Sanskrit, Prakrit or Dravidian languages.

4) The inside or interior of anything.

5) A middle state or condition.

8) The middle term of a progression.

2) A young woman, one arrived at puberty.

Madhya (मध्य).—adj., seems to be used (as rarely in Sanskrit) in the sense of Sanskrit madhyama, madhyastha, neutral, impartial; here perhaps more specifically umpire: tatra bhavantehi madhyehi bhavitavyaṃ Mahāvastu iii.390.14, there (where the speaker is to engage in a debate with another person) your worships must be umpires (less likely, must be present, in the midst).

(-dhyā) 1. A young woman, a girl arrived at puberty. 2. The middle-finger. 3. A form of metre, a stanza of four lines containing three syllables in each. 4. Of a middle size or quantity, moderate. 5. Neutral. 6. Just, reasonable. m.

Madhya (मध्य).—[adjective] middle, central, moderate, indifferent, neutral; [neuter] (also madhye) [adverb] in the midst of, inside, in or into, between, among ([genetive] or —°, madhye also °— in [adverb]), as subst. the middle, centre, interior, [especially] the middle of the body, the waist (also [masculine]).

8) m. (in [algebra]) the middle term or the mean of progression, [Colebrooke]

14) n. the middle of the sky (with or [scilicet] nabhasas), [Manu-smṛti; Mahābhārata]

24) Name of a country between Sindh and Hindūstan proper, [Catalogue(s)]

Madhya (मध्य) in the Sanskrit language is related to the Prakrit word: Majjha.

1) [adjective] placed or being halfway between two given points in place or time; equidistant from all sides, points, etc.; middle; mean.

2) [adjective] of quality that is neither too good nor too bad; of intermediate quality.

3) [adjective] not having a mental leaning, inclination or preference; not partial; unbiased.

1) [noun] the central portion or place.

3) [noun] the part of the body between the ribs and the hips; the waist.

4) [noun] a position or placement that is neither too good nor too bad.

1) [adverb] in an intermediate space, position; between.

2) [adverb] in an intermediate time; between.

Search found 63 books and stories containing Madhya, Madhyā, Mādhya; (plurals include: Madhyas, Madhyās, Mādhyas). You can also click to the full overview containing English textual excerpts. Below are direct links for the most relevant articles:

Dhanañjaya on the hero and other characters < [Introduction]

Difference between the Daśarūpaka and the Nāṭyaśāstra < [Introduction]

Ninefold classification of dharmas < [Part 2 - Understanding dharmatā and its synonyms]

Chapter 3 - Defense of the Teaching by Ma Lotsawa, Zhama, and her brother < [Book 4 - New Traditions of Secret Mantra]