Kundala means something in Buddhism, Pali, Hinduism, Sanskrit, Jainism, Prakrit, the history of ancient India, Marathi. If you want to know the exact meaning, history, etymology or English translation of this term then check out the descriptions on this page. Add your comment or reference to a book if you want to contribute to this summary article. 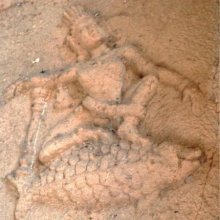 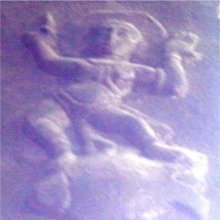 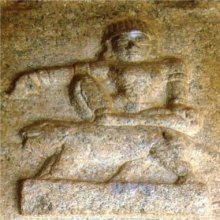 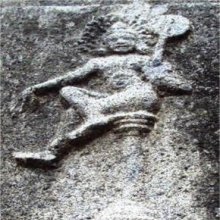 Kuṇḍala (कुण्डल)—One of the Heavenly ornaments according to the Vāyu Purāṇa. Used by the Rākṣasas and by the people of the Kuru country. Bali, Lord of Pātāla, is called Kuṇḍalin.

1) Kuṇḍala (कुण्डल).—A serpent born in the Kaurava dynasty. It was burnt to death at the serpent yajña of Janamejaya. (Ādi Parva, Chapter 57, Verse 16).

Kuṇḍala (कुण्डल) refers to “ear-rings”, according to the Śivapurāṇa 2.2.21. Accordingly as Brahmā narrated to Nārada:—“[...] When they [viz., Śiva’s Gaṇas (attendants)] went away and He was left alone with Satī, Śiva rejoiced much and sported with her. [...] Sometimes He would be sporting with her ear-rings (kuṇḍala), tying and untying and scrubbing them Himself”.

Kuṇḍala (कुण्डल) is a name mentioned in the Mahābhārata (cf. I.52.12, I.57, I.89.51) and represents one of the many proper names used for people and places. Note: The Mahābhārata (mentioning Kuṇḍala) is a Sanskrit epic poem consisting of 100,000 ślokas (metrical verses) and is over 2000 years old.

Kuṇḍalā also refers to the name of a River mentioned in the Mahābhārata (cf. VI.10.20).

It appears to be probable that in the early periouds of India civilization men and women considered it a beauty to have large ear-ornaments attached to the ear-lobes, which were often specially bored and dilated for the purpose.

Kuṇḍala (कुण्डल) is another name for Karṇabhūṣaṇa (“ear-ornaments” or “earrings”), as defined in treatises such as the Pāñcarātra, Pādmasaṃhitā and Vaikhānasa-āgamas, extensively dealing with the technical features of temple art, iconography and architecture in Vaishnavism.—A number of ear-ornaments (Karṇabhūṣaṇa) are found in Indian sculptures. Bharata mentions two sets one for male and another for female. [...] Karṇabhūṣaṇa (also know as Karṇakuṇḍala or simply Kuṇḍala) refers to “ear-ornaments” and are usually worn in two different manners: by inserting the earring through a hook into the pierced earlobe and by inserting it directly inside the enlarged earlobe.

Kuṇḍala (कुण्डल) refers to an “ear-ring” and is classified as an ornament (ābharaṇa) for the ears (karṇa) to be worn by males, according to Nāṭyaśāstra chapter 23. It is of the āvedhya type, or “ornaments that are to be fixed by piercing the limbs”. It is to be worn in the lower lobe of the ear. Such ornaments for males should be used in cases of gods and kings.

Kuṇḍala (कुण्डल) also refers to a type of ornament (ābharaṇa) for the ears (karṇa) to be worn by females. Such ornaments for females should be used in cases of human females and celestial beings (gods and goddesses).

Ābharaṇa (‘ornaments’, eg., kuṇḍala) is a category of alaṃkāra, or “decorations”, which in turn is a category of nepathya, or “costumes and make-up”, the perfection of which forms the main concern of the Āhāryābhinaya, or “extraneous representation”, a critical component for a successful dramatic play.

1. Kundala: Daughter of the king of Devaputta. Once she was a bitch in Kakubandhakandara and a samanera, Tissa, had given her a little food. Later, when Tissa was on his way to the Bodhi tree (in Gaya) she saw him, and, remembering her past existence, invited him to the palace and entertained him. Later she built a vihara for him, where he attained arahantship. Ras.i.103f.

2. An arahant. He came of a brahmin family of Savatthi and entered the Order, but from want of mental balance he could not concentrate his thoughts. Then, one day, while begging for alms, he saw how men conducted water whither they wished by digging channels, how the fletcher fixed the arrow shaft in his lathe surveying it from the corner of his eye, how the chariot makers planed axle and tire and hub. Dwelling on these things, he soon attained arahantship.

In the past he was a park keeper, and gave a coconut to the Buddha Vipassi, which the Buddha accepted while travelling through the air (ThagA.i.71f). Perhaps he is to be identified with Nalikeradayaka Thera of the Apadana (ii.447f). The same Apadana verses, however, are also ascribed to Khitaka Thera (ThagA.i.315f). The verse attributed to Kundala in the Theragatha (Thag.19) occurs twice in the Dhammapada, and is in the Dhammapada Commentary mentioned as having been preached once in reference to Pandita Samanera (DhA.ii.147), and once in reference to Sukha Samanera (DhA.iii.99).

Kuṇḍala (कुण्डल) refers to “earrings” and represents one of the five mudrās (tantric ornaments) of Vajravārāhī, according to the 12th-century Abhisamayamañjarī. These mudrās are depicted upon Vajravārāhī’s body and are all made of human bone. They are made to represent the five signs of kāpālika observance.

Kuṇḍala is recorded in ancient Jaina canonical texts dealing with cosmology and geography of the universe. Examples of such texts are the Saṃgrahaṇīratna in the Śvetāmbara tradition or the Tiloyapannatti and the Trilokasāra in the Digambara tradition.

Kuṇḍala (कुण्डल) participated in the war between Rāma and Rāvaṇa, on the side of the latter, as mentioned in Svayambhūdeva’s Paumacariu (Padmacarita, Paumacariya or Rāmāyaṇapurāṇa) chapter 57ff. Svayambhū or Svayambhūdeva (8th or 9th century) was a Jain householder who probably lived in Karnataka. His work recounts the popular Rāma story as known from the older work Rāmāyaṇa (written by Vālmīki). Various chapters [mentioning Kuṇḍala] are dedicated to the humongous battle whose armies (known as akṣauhiṇīs) consisted of millions of soldiers, horses and elephants, etc.

Kuṇḍalā (कुण्डला) is the name of a Yoginī mentioned in various Jaina manuscripts, often being part of a list of sixty-four such deities. How the cult of the Tantrik Yoginīs originated among the vegetarian Jainas is unknown. The Yoginīs (viz., Kuṇḍalā) are known as attendants on Śiva or Pārvatī. But in the case of Jainism, we may suppose, as seen before that they are subordinates to Kṣetrapāla, the chief of the Bhairavas.

[«previous (K) next»] — Kundala in India history glossary
Source: What is India: Inscriptions of the Vākāṭakas

Kuṇḍala (कुण्डल) refers to “jewelled ear-ornaments”, which was worn by kings during the reign of the Vākāṭakas (mid-3rd century CE).—Ajaṇṭā paintings give us a clear idea of the costume and jewellery worn by men and women in Vidarbha in the age of the Vākāṭakas. [...] Men and women were very fond of jewellery in the Vākāṭaka age. Merchants, middle class people and servants generally appear without jewellery on their person, but kings, princes, high officers, queens and wives of rich people as also their maids are represented with a variety of ornaments. [...] Kings used to wear a high jewelled diadem. They also put on jewelled ear-ornaments (kuṇḍalas) and necklaces of pearls or gems. Their arms were adorned with jewelled armlets (aṅgadas), with strings of pearls hanging from them.

Kuṇḍala (कुण्डल).—(1) (nt.) coil (of rope): Jātakamālā 23.11 anyatra rajju-kuṇḍalād dātrāc caikasmāt; see next (1); (2) in Lalitavistara 276.22 nīla-mṛdu-kuṇḍala-jāta-pradakṣiṇa-nandyā- [Page186-a+ 71] varta-kācilindika-sukhasaṃsparśaiś ca tṛṇair, the word kuṇḍala (vv.ll. kuntala, kuṇṭaka) is obscure; it is omitted from the [compound] in Foucaux's Tibetan; a late Sanskrit Lex. records the meaning thick for kuṇṭaka; this meaning would fit here but there is no other support for a word kuṇṭaka. On the other hand, perhaps kuṇḍala-jāta-means simply curling (of blades of grass, tṛṇa); compare kuṇḍalaka (2) -jāta, of hair; Foucaux's Note p. 167, bottom, actually cites this form of the [compound] as the reading of one ms., but adds that Tibetan indicates a reading kuśa-jāta (of this his Tibetan text and its translation(s) contain no trace); curling seems to me a curious epithet to be applied to grass; (3) (compare Sanskrit Lex. id. = pāśa), a ring as a kind of fetter: Gaṇḍavyūha 353.12, see s.v. kaṭaka; (4) m., name of a form of a mendicant, created magically by Māra to obstruct Buddha: Mahāvastu i.270.13.

5) a particular disease of the bladder, [Caraka]