Kinnara means something in Buddhism, Pali, Hinduism, Sanskrit, Jainism, Prakrit, Marathi, Hindi. If you want to know the exact meaning, history, etymology or English translation of this term then check out the descriptions on this page. Add your comment or reference to a book if you want to contribute to this summary article.

Alternative spellings of this word include Kinnar. 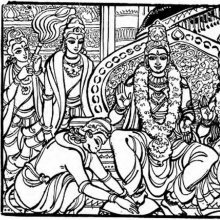 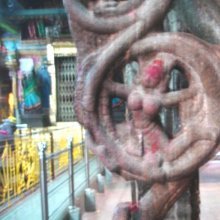 Kinnara (किन्नर) refers to “a kind of demigod who plays musical instruments and sings with the Gandharvas”. (cf. Glossary page from Śrīmad-Bhagavad-Gītā).

Kinnara (किन्नर).—A sect of Devas all of whom hold Vīṇās in their hands. (Agni Purāṇa, Chapter 51).

Kinnara (किन्नर), like Yakṣas, are the attendants of Kubera. They are represented as mythical beings with a human figure and the head of a horse or with a horse’s body and the head of a man. They are described as celestial choristers and musicians who dwell in the paradise of Kuvera on Kailāsa. They are called Aśvamukhas, Turaṅgavaktras, “horse-faced” and Mayus.

1b) A group of divine singers.1 Born of Brahmā's shadow; these frequent Kailāsa;2 celebrate Puruṣa, Indra and Hari.3 Went to Dvārakā to see Kṛṣṇa,4 and learnt the dharma from the seven sages;5 worship pitṛs.6

1d) Sons of Aśvamukhas; had a number of gaṇas, horse-faced and human-faced; famous for dancing and music;1 servants in Śivapura;2 live in the Mahānīla hill;3 hundred cities of, in Kailāsa.4

Kiṃnara (किंनर) is a name mentioned in the Mahābhārata (cf. I.60.7) and represents one of the many proper names used for people and places. Note: The Mahābhārata (mentioning Kiṃnara) is a Sanskrit epic poem consisting of 100,000 ślokas (metrical verses) and is over 2000 years old.

1) In Buddhist mythology and Hindu mythology, a kinnara is a paradigmatic lover, a celestial musician, half-human and half-horse (India) or half-bird (south-east Asia). Their character is clarified in the Adi parva of the Mahabharata, where they say:

We are everlasting lover and beloved. We never separate. We are eternally husband and wife; never do we become mother and father. No offspring is seen in our lap. We are lover and beloved ever-embracing. In between us we do not permit any third creature demanding affection. Our life is a life of perpetual pleasure.

They are also featured in a number of Buddhist texts, including the Lotus Sutra. An ancient Indian string instrument is known as the Kinnari Veena.

2) In Southeast Asian mythology, Kinnaris, the female counterpart of Kinnaras, are depicted as half-bird, half-woman creatures. One of the many creatures that inhabit the mythical Himavanta. Kinnaris have the head, torso, and arms of a woman and the wings, tail and feet of a swan. She is renowned for her dance, song and poetry, and is a traditional symbol of feminine beauty, grace and accomplishment.

4) In Tibet the Kinnara is known as the 'shang-shang' (ཤང་ཤང; Sanskrit: civacivaka). This chimera is depicted either with just the head or including the whole torso of a human including the arms with the lower body as that of a winged bird. In Nyingma Mantrayana traditions of Mahayoga Buddhadharma, the shang-shang symbolizes 'enlightened activity' (Wylie: phrin las).

Kiṃnara (किंनर) refers to “divine artists” depending on the gods according to the 2nd century Mahāprajñāpāramitāśāstra (chapter XV). Accordingly, “The Kiṃnaras also are divine artists who depend on the gods. Gandharvas and Kiṃnaras habitually reside in two places: their usual residence is on the Ten-Jewel Mountain (daśaratnagiri); but sometimes in the heavens, they play music for the gods. These two types of beings are not subject to the alternations of high and low”.

Kiṃnaras, together with other deities constitute the Asuras, according to chapter XLVI.—Accordingly, “great gods such as the Asuras, Kiṃnaras, Gandharvas, Kumbhāndas, Yakṣas, Rakṣasas, Bhūtas, etc., are Asuras, and when their troops increase, those of the Devas decrease. Their power (anubhāva) and their transformations (nirmāṇa) were exercised at will. The Asura destiny is called thus because the Asuras appear at the head of a list; the others, namely, the Kiṃnaras, Gandharvas, Kuṃbhāṇḍas, Yakṣas, Bhūtas, etc. constitute one and the same destiny with them”.

Kinnara (किन्नर) (in Chinese: Kin-na-lo) refers to one of the fifty-five kingdoms enumerated in chapter 17 of the Candragarbha: the 55th section of the Mahāsaṃnipāta-sūtra, a large compilation of Sūtras (texts) in Mahāyāna Buddhism partly available in Sanskrit, Tibetan and Chinese.—In the Candragarbhasūtra, the Bhagavat invites all classes of Gods and Deities to protect the Law [dharma?] and the faithful in their respective districts.—In Kinnara, the following deities are appointed (among others): The Kumbhāṇḍa Acala.

Kinnara (किन्नर) (in Chinese: Kin-na-lo) is the name of an ancient kingdom associated with Revatī or Revatīnakṣatra, as mentioned in chapter 18.

Kinnara (किन्नर) refers to a group of deities summoned by the Yamāntaka-mantra and mentioned as attending the teachings in the 6th century Mañjuśrīmūlakalpa: one of the largest Kriyā Tantras devoted to Mañjuśrī (the Bodhisattva of wisdom) representing an encyclopedia of knowledge primarily concerned with ritualistic elements in Buddhism. The teachings in this text originate from Mañjuśrī and were taught to and by Buddha Śākyamuni in the presence of a large audience (including Kinnara).

Kinnara (किन्नर) is the name of a Vīra (hero) who, together with the Ḍākinī named Kinnarī forms one of the 36 pairs situated in the Ākāśacakra, according to the 10th century Ḍākārṇava chapter 15. Accordingly, the ākāśacakra refers to one of the three divisions of the dharma-puṭa (‘dharma layer’), situated in the Herukamaṇḍala. The 36 pairs of Ḍākinīs and Vīras [viz., Kinnara] are dark blue in color; they each have one face and four arms; they hold a skull bowl, a skull staff, a small drum, and a knife.

They are all black. Aśoka is the Caitya-tree of these gods.

According to Śvetāmbaras they are of ten kinds:

Black in complexion, they have especially charming faces, they wear crowns and have a peaceful appearance. Aśoka tree is their flag mark.

The texts of both the schools is unanimous in giving this [Kinnara] Yakṣa three faces and six arms. His vehicle differs from a tortoise with the Śvetāmbaras to a fish with the Digambaras. The former sect describes his attributes as a citrus, mace, Abhaya, mongoose, lotus and a rosary. The Digambaras, on the contrary, describe them as a disc, Vajra, goad, club, rosary and Vara Mudrā.

1) Kinnara (किन्नर) and Kimpuruṣa are the two Indras (i.e., lords or kings) of the Kinnaras who came to the peak of Meru for partaking in the birth-ceremonies of Ṛṣabha, according to chapter 1.2 [ādīśvara-caritra] of Hemacandra’s 11th century Triṣaṣṭiśalākāpuruṣacaritra (“lives of the 63 illustrious persons”): a Sanskrit epic poem narrating the history and legends of sixty-three important persons in Jainism.

2) Kinnara (किन्नर) is the name of a Yakṣa (i.e., Śāsanadevatās or ‘messenger-deities’) associated with Dharma-nātha, according to chapter 4.5 [dharmanātha-caritra].—Accordingly:—“Originating in that congregation, Kinnara, three-faced, with a tortoise for a vehicle, red in color, resplendent with right hands holding a citron and a club, and with one in the position bestowing fearlessness; and with left hands encircled with an ichneumon, lotus, and rosary, became Dharmanātha’s messenger-deity. Likewise originated, Kandarpā, fair in body, with a fish for a vehicle, adorned with right hands carrying a blue night-blooming lotus and goad, and with one left hand carrying a lotus and one in the position bestowing fearlessness, became the Lord’s messenger-deity always near at hand”.

kinnara : (m.) a bird with a human head; name of a forest dwelling nation.

(-raḥ) 1. A demigod attached to the service of Kuvera, a celestial quirister or musician. 2. A kind of flower or attendant on a Jina or Jaina saint. f. (-rī) A female Kinnara, or chorister. E. kiṃ what, used contemptuously, (what kind of) nara a man: the Kinnara having, with the human figure, the head of a horse.

Kiṃnara (किंनर).—[masculine] a class of mythical beings (half man half animal).

2) [=kiṃ-nara] [from kiṃ > kim] b m. ‘what sort of man?’ a mythical being with a human figure and the head of a horse (or with a horse’s body and the head of a man, [Śiśupāla-vadha iv, 38]; originally perhaps a kind of monkey cf. vā-nara; in later times (like the Naras) reckoned among the Gandharvas or celestial choristers, and celebrated as musicians; also attached to the service of Kubera; (with Jains) one of the eight orders of the Vyantaras), [Manu-smṛti; Mahābhārata] etc.

5) [v.s. ...] of the attendant of the fifteenth Arhat of the present Avasarpiṇī, [Jaina literature]

Kinnara (किन्नर) [Also spelled kinnar]:—(nm) a mythical being with human figures and a head of horse or with a horse’s body and the head of a man; a race celebrated as musicians.

1) [noun] a male member of the category of mythical beings in human form with the head of a horse.

7(b): Portrait of Different Classes Projected in Painting < [Chapter 5 - Painting and Image Making]