Kirata means something in Buddhism, Pali, Hinduism, Sanskrit, Jainism, Prakrit, Marathi, Hindi, biology. If you want to know the exact meaning, history, etymology or English translation of this term then check out the descriptions on this page. Add your comment or reference to a book if you want to contribute to this summary article. 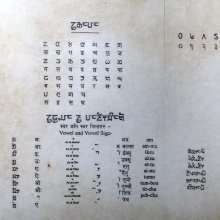 Kirāta (किरात).—A mountainous region near modern Udaipur, Rajasthan, where Arjuna did penance. Lord Śiva took the form of a Kirāta and fought with Arjuna.

Kirāta (किरात) is the name of a gaṇa (attendant of Śiva), mentioned in the Skandapurāṇa 4.2.53. In this chapter, Śiva (Giriśa) summons his attendants (gaṇas) and ask them to venture towards the city Vārāṇasī (Kāśī) in order to find out what the yoginīs, the sun-god, Vidhi (Brahmā) were doing there.

While the gaṇas such as Kirāta were staying at Kāśī, they were desirous but unable of finding a weakness in king Divodaśa who was ruling there. Kāśī is described as a fascinating place beyond the range of Giriśa’s vision, and as a place where yoginīs become ayoginīs, after having come in contact with it. Kāśī is described as having both the power to destroy great delusion, as well as creating it.

1b) People of an eastern kingdom; a mountain kingdom; defeated by Bharata and purified of sin by the worship of Hari;1 vanquished by Kalki;2 a hill tribe.3 Defeated by Sagara, took caves and hills as residences;4 reside on the east of Bhāratavarṣa;5 co-habitation with Kirāta women by a Brāhmaṇa; purification at the end of the twelfth day—rites cited.6

Kirāta (किरात) is the Sanskrit name of a deity presiding over Kailāsācala, one of the sixty-eight places hosting a svāyambhuvaliṅga, which is one of the most sacred of liṅgas according to the Śaivāgamas. The list of sixty-eight svāyambhuvaliṅgas and presiding deities (e.g., Kirāta) is found in the commentary on the Jirṇoddhāra-daśaka by Nigamajñānadeva. The word liṅga refers to a symbol used in the worship of Śiva and is used thoughout Śaiva literature, such as the sacred Āgamas.

Kirāta refers to an ancient district or cultural territory, as mentioned in the 7th-century Mudrārākṣasa written by Viśākhadeva. Kīra corresponds to the Himalayas in the north-east.

Kirāta (किरात) is a generic term in Sanskrit literature for people who lived in the mountains, particularly in the Himalayas and North-East India and who are believed to have been Mongoloid in origin. They are mentioned along with Cīnas (Chinese), and were different from the Niśādas.

Kirāta (किरात) is the name of a tribe, usually to be represented by a brown (asita) color when painting the limbs (aṅgaracanā), according to Nāṭyaśāstra chapter 23. The painting is a component of nepathya (costumes and make-up) and is to be done in accordance with the science of āhāryābhinaya (extraneous representation).

Kirāta (किरात) or Kirātamūrti refers to one of the twenty-eighth forms (mūrti) of Śiva mentioned in the Vātulāgama: twenty-eighth among the Siddhāntaśaivāgama. The forms of Śiva (e.g., Kirāta) are established through a process known as Sādākhya, described as a five-fold process of creation.

Kirata [ಕಿರಾತ] in the Kannada language is the name of a plant identified with Swertia chirayita (Roxb.) H. Karst. from the Gentianaceae (Gentian) family having the following synonyms: Swertia chirata, Ophelia chirata. For the possible medicinal usage of kirata, you can check this page for potential sources and references, although be aware that any some or none of the side-effects may not be mentioned here, wether they be harmful or beneficial to health.

1) Kirāta (किरात) refers to a country belonging to “Nairṛtī (south-western division)” classified under the constellations of Svāti, Viśākhā and Anurādhā, according to the system of Kūrmavibhāga, according to the Bṛhatsaṃhitā (chapter 14), an encyclopedic Sanskrit work written by Varāhamihira mainly focusing on the science of ancient Indian astronomy astronomy (Jyotiṣa).—Accordingly, “The countries of the Earth beginning from the centre of Bhāratavarṣa and going round the east, south-east, south, etc., are divided into 9 divisions corresponding to the 27 lunar asterisms at the rate of 3 for each division and beginning from Kṛttikā. The constellations of Svāti, Viśākhā and Anurādhā represent the south-western division consisting of [i.e., Kirāta] [...]”.

2) Kirāta (किरात) also refers to a country belonging to “Aiśānī (north-eastern division)” classified under the constellations of Revatī, Aśvinī and Bharaṇī, according to the system of Kūrmavibhāga.

Kirāta (किरात) is the name of a country (possibly identified with hill tribes of the Himalayan zone), classified as both Hādi and Kādi (both types of Tantrik division), according to the 13th century Sammoha-tantra (fol. 7).—There are ample evidences to prove that the zone of heterodox Tantras went far beyond the natural limits of India. [...] The zones in the Sammoha-tantra [viz., Kirāta] are here fixed according to two different Tantrik modes, known as Kādi and Hādi.

Kirāta (किरात): Huntsman, The non-Aryan aborigines of the land. They are mentioned along with Cinas for Chinese. Kiratas are believed to be of Tibeto-Burman origin.

Probably the name given to a tribe of jungle men. Their language is classed with those of the Ottas, the Andhakas, the Yonakas and the Damilas, as a language of the Milakkhas (non Aryans). E.g., DA.i.176; VibhA.388; see also Zimmer: Altind. Leben 34.

1) Kirāta (किरात) refers to a group of Mlecchas, as mentioned in chapter 1.4 [ādīśvara-caritra] of Hemacandra’s 11th century Triṣaṣṭiśalākāpuruṣacaritra (“lives of the 63 illustrious persons”): a Sanskrit epic poem narrating the history and legends of sixty-three important persons in Jainism.

Accordingly: “[...] After traversing the cave fifty yojanas long, the King started to conquer the north half of Bharatavarṣa. There dwell Kirātas, named Āpātas, arrogant, rich, powerful, fiery, like demons on earth. They have unlimited mansions, couches, seats, and vehicles, much gold and silver, like relatives of Kubera. [...] The Kirātas became extremely angry when they saw Bharata who had come, making a sun with crores of rays in the sky, as it were, by the rays from the golden armor, axes, and darts; providing the sky with teeth by upraised staves, bows, and hammers; [...] The lords of the Kirātas wore armor, indivisible as if made of tortoise-shell. They put on their heads helmets covered with the hair of bears, etc., giving the appearance of Rākṣasa-heads with hair standing up”.

2) Kirāta (किरात) refers to a sub-division of the Mlecchas: one of the two-fold division of men born in Mānuṣottara and in the Antaradvīpas, situated in the “middle world” (madhyaloka), according to chapter 2.3.—Accordingly, “In these 35 zones on this side of Mānuṣottara and in the Antaradvīpas, men arise by birth; on the mountains, Meru, etc., by kidnapping and power of learning, in the 2½ continents and in 2 oceans. [...]. From the division into Āryas and Mlecchas they are two-fold. [...] The Mlecchas—[e.g., the Kirātas, ...] and other non-Āryas also are people who do not know even the word ‘dharma’”.

Kirāta, (& kirāṭa) (prob. dial. ) a man of a tribe of junglemen, classed with dwarfs among the attendants of a chief DA. I, 148. See on the Kirāta as a mountain tribe Zimmer, Altindisches Leben p. 34. Cp. also apakiritūna & okirati2, okiraṇa.—A secondary meaning of kirāṭa is that of a fraudulent merchant, a cheat (see kirāsa & kerāṭika). (Page 215)

kirāta (किरात).—m (S) One of the barbarous tribes who inhabit woods and mountains, and live by the chase. 2 A kind of Gentian. See kirāīta.

kirāta (किरात).—m One of the barbarous tribes who inhabit woods and mountains, and live by the chase.

5) Name of Śiva in the disguise of a Kirāta.

(-taḥ) 1. A savage, one of the barbarous tribes who inhabit woods and mountains and live by the chase, the Kirrhadœ of Arrian. 2. Siva as a mountaineer opposed to Arjuna, the account of which is the subject of the poem, the Kiratarjuniya. 3. A kind of gentian: see kirātatikta. 4. A pigmy a dwarf. 5. A groom, a horseman. f. (-tī) 1. The river Ganges or its goddess. 2. A name of Durga. 3. A bawd, a procuress. 4. The celestial Ganges or river of Swarga. E. kṝ to scatter, (speech, &c.) and ata who goes; also kirātaka.

Kirāta (किरात).—[masculine] ī [feminine] [Name] of a barbarous mountaintribe (appearing also in the service of kings).

8) Name of Śiva (as a mountaineer opposed to Arjuna, described in Bhāravi’s poem Kirātārjunīya)

1) [noun] the name of a savage tribe that inhabits woods and mountains, the main profession of the members of which is hunting, spread in North India, China and Tibet.

Verse 10.86 < [Section IX - Variations in the Functions of the Brāhmaṇa due to Abnormal Conditions]