Agastya means something in Hinduism, Sanskrit. If you want to know the exact meaning, history, etymology or English translation of this term then check out the descriptions on this page. Add your comment or reference to a book if you want to contribute to this summary article. 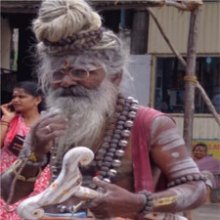 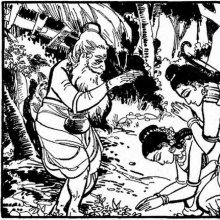 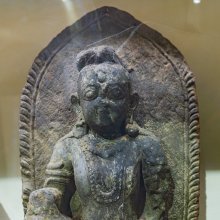 Agastya (अगस्त्य):—The consequences of using various flowers in worship, (e.g. agastya flowers) leads to success, according to the Bhaviṣya-purāṇa (brahmaparva, 197:1-11)

Agastya (अगस्त्य).—Genealogy. Descended from Viṣṇu in this order Brahmā-Marīci-Kaśyapa-Sūrya-Agastya. (See full article at Story of Agastya from the Puranic encyclopaedia by Vettam Mani)

Agastya (अगस्त्य) is the name of a plant which is used in the worship of Śiva, according to the Śivapurāṇa 2.1.14:—“[...] a Dhattūra plant with red stem (raktadaṇḍa) is specially auspicious for worship. A worshipper using Agastya flowers (kusuma) will earn great fame”.

Agastya is a Muni (Sage) who once attended a great sacrifice by Dakṣa, according to the Śivapurāṇa 2.2.27. Accordingly as Brahmā narrated to Nārada:—“[...] once a great sacrifice was started by Dakṣa, O sage. To partake in that sacrifice, the celestial and terrestrial sages and devas were invited by Śiva and they reached the place being deluded by Śiva’s Māyā. [Agastya, ...] and many others along with their sons and wives arrived at the sacrifice of Dakṣa—my son”.

1a) Agastya (अगस्त्य).—A son of Pulastya and Havirbhū: he was Dahra-agni in his previous birth.*

1b) A contemporary of Kṛṣṇa and Rāma; and a resident of Mount Malaya. Visited by Balarāma.1 Came to Syamantapañcaka to see Kṛṣṇa.2 Called on Parīkṣit practising prāyopaveśa.3

1c) Married the first born daughter of King Malayadhvaja Pāṇḍya, and had a son Dṛḍhācyuta.1 Cursed the Pāṇḍyan king Indradyumna to become an elephant.2

1d) The constellation (Canopus) that moves fast above Dhruvamaṇḍala.*

1f) Born of garbha; born later as Dattāli;1 (Dattoli). residence (bhavana) at Mahāmalaya;2 relation of, to Potṛyaṇa;3 Udayantaka mountain brought by; and his wife.4

Agastya (अगस्त्य) refers to the name of a Tīrtha (pilgrim’s destination) mentioned in the Mahābhārata (cf. III.86.10). Note: The Mahābhārata (mentioning Agastya) is a Sanskrit epic poem consisting of 100,000 ślokas (metrical verses) and is over 2000 years old.

Agastya is also mentioned in the Mahābhārata (cf. IV.20.11) and represents one of the many proper names used for people and places.

[«previous (A) next»] — Agastya in Ayurveda glossary
Source: Wisdom Library: Āyurveda and botany

Agastya (अगस्त्य) is a Sanskrit word referring to Sesbania grandiflora, a small tree from the Fabaceae (legume) family of flowering plants. It is used throughout Ayurvedic literature such as the Caraka-saṃhitā and the Suśruta-saṃhitā. It is also known as Agasti. In English, the plant is known as the “vegetable hummingbird”, “agati” or the “humminbird tree”. It has many botanical synonyms, among which: Aeschynomene grandiflora, Agati grandiflora, Coronilla grandiflora and Emerus grandiflorus.

This plant (Sesbania grandiflora) is also idintified with Muni, a medicinal plant used for the treatment of all major fevers (jvara), as described in the Jvaracikitsā (or “the treatment of fever”) which forms the first chapter of the Sanskrit work called Mādhavacikitsā.

Agastya (अगस्त्य) refers to star Canopus, mentioned in verse 3.52 of the Aṣṭāṅgahṛdayasaṃhitā (Sūtrasthāna) by Vāgbhaṭa.—Accordingly, “[...] when hungry, one shall turn to bitter, sweet, astringent, and light food, [...]; to water (that is) heated by the beams of the hot-rayed one (and) cooled by the beams of the cold-rayed one, and this thoroughly day and night; (that is) detoxicated by the (heliacal) rising of Canopus [viz., Agastya], pure, called ‘swan-water’, devoid of dirt, (and) destructive of dirt”.

Note: Agastya, also written Agasti, has been reproduced here and in IV.3.131 by the Sanskrit word Ri-ṣi (for rsi), Agastya being evidently taken for the Indian sage par excellence. The proper Tibetan correspondent, which is given as Ri-byi in Mahāvyutpatti 3457, occurs in IV.6.54 and VI.35.64, but only as the reading of CD, while NP have respectively Ri-ṣi and Ri-yi instead.

Agastya is the name of one of the eighteen Siddhars mentioned in the Abhidāna-cintāmaṇi, a 12th century lexicon by Hemacandra. The Siddhars refers to ancient intellectuals of Tamil Nadu and are the teachers of Siddha medicine: an ancient practice of South-India claiming to over 8,000 years old.

According to tradition, Nandi and Agastya learnt the Siddha system of medicine and Śivayoga from Śiva, and imparted it to a number of disciples (eg., Agastya). These Siddhars are united by their philosophy, accepting the human body as the microcosm of the universe, and seeing the human evolution as the ultimate accomplishment of the regenerative power of the Universe.

Agastya.—In the Tamil Siddha tradition, Agastya (Agattiyar in Tamil) is celebrated as the pioneer of the Siddha cult as well as father of a Tamil School of medicine. Many of the Tamil Siddhas trace their origin to Agastya. Invariably, there exist many local traditions and fabulous myths on him.

Maṇimekalai also tells about the miraculous birth of the sage and his relation to Vasiṣṭha. The first reference to Agastya as the “Father of Tamil” and the first Tamil grammarian is found in Nakkīrar’s commentary to Iraiyanār’s Akapporul (8th century C.E).

According to another tradition, Agastya married Lopamudrā and had a son named Sāgaren. He led the first colony of Brahmans from the north and settled in southern India under the auspices of Kulasekara Pāṇḍya, the founder of Pāṇḍyan dynasty of Madurai.

[«previous (A) next»] — Agastya in Vyakarana glossary
Source: Wikisource: A dictionary of Sanskrit grammar

Agastya (अगस्त्य) is the name of a sage who was in the company of Bharata when he recited the Nāṭyaveda them, according to the Nāṭyaśāstra chapter 35. Accordingly, they asked the following questions, “O the best Brahmin (lit. the bull of the twice-born), tell us about the character of the god who appears in the Preliminaries (pūrvaraṅga). Why is the sound [of musical instruments] applied there? What purpose does it serve when applied? What god is pleased with this, and what does he do on being pleased? Why does the Director being himself clean, perform ablution again on the stage? How, O sir, the drama has come (lit. dropped) down to the earth from heaven? Why have your descendants come to be known as Śūdras?”.

Āgastya (आगस्त्य) is the name of a plant which is considered a vegetable fit for use in oblation offerings, according to verse 25.128b-134 of the 8th-century Īśvarasaṃhitā. Accordingly, “... they [eg., Āgastya] are to be cut with a knife or sickle uttering vīryanantra, shall notice the (presence of the worms), insects and wash them (vegetables) many times, with water. They are to be kept as before, in cooking vessels, either alone or mixed up with each other with salt, pepper, mustards, jīraka, leaves of śrīparṇī, water, waters of the coconut, their fruits and grinded with honey mixed up with ghee, together with pulses, black gram, neem and varieties of green gram with soups. Kinds of green gram and others without soup but with salt and others”.

Agastya (अगस्त्य) refers to:—A great sage, the son of Mitra and Varuṇa, who was born in a water pot. He composed Vedic hymns, drank the entire ocean to help the demigods defeat the dānavas, and obliged the Vindhya mountain range to bow down before him. Agastya also refers to the mind. (cf. Glossary page from Śrī Bṛhad-bhāgavatāmṛta).

[«previous (A) next»] — Agastya in Hinduism glossary
Source: Google Books: 101 Mystics of India

Sage Agastya, who was dwarfish in appearancem is considered the doyen of Tamil mystics and the father of the Tamil language. He is to the Tamil language what Panini was to Sanskrit. Agastya is famous for teaching the “Āditya Hṛdaya” mantra to Sri Rama on the eve of his battle with the demon Ravana. Rama is believed to have won victory vecause of the power of the prayer to the Sun taught by Agastya.

Kāryasiddhimalai literally means “garland (of songs) which ensures success in undertakings”. Other works attributed to Agastya are:

According to legend, the sage Agastya is an incarnation of Agni. Agni and Vayu had been cursed by Indra for insubordination to be born as mortals. Vayu was born as Vasishta (this account is different from the popular one where Vasishta is a wish-born son of Brahma). According to this curse, Agastya was born as the son of MitraVaruna Rishi (this is different from the dual Mitra-Varuna mentioned in the Rig Veda) and the Apsara Urvashi. Among the many epithets of Agastya are KumbhaSambhava (born in a pot) and MitraVaruni (son of MitraVaruna). From an early age he displayed an aptitude for the scriptures and spirituality.

He is also famous for his curses. He cursed Nahusha who had insulted him, to be born as a giant python. Bheema was instrumental in releasing Nahusha from the curse. He had also cursed a king named Indradhyumna to be born as an elephant, for the King busy with his prayer, was late in receiving the sage.

He is also famed for drinking the ocean dry.

Agastya (अगस्त्य): A great sage whose life-story the Pandavas learnt while on pilgrimage to holy places, his wife Lopamudra was equally a great sage in her own right.

[«previous (A) next»] — Agastya in Sanskrit glossary
Source: DDSA: The practical Sanskrit-English dictionary

3) Originating from the plant Agasti Grandiflorum.

Search found 76 books and stories containing Agastya, Āgastya, A-gastya; (plurals include: Agastyas, Āgastyas, gastyas). You can also click to the full overview containing English textual excerpts. Below are direct links for the most relevant articles:

Canto LII - The Creation and Appellations of the Rudras

Chapter 2 - The Teaching of Dispassion (vairāgya-upadeśa)