Sculptures in temples in Kumbakonam: photo 455

Photo 455 of 640 in Gallery: Sculptures in temples in Kumbakonam 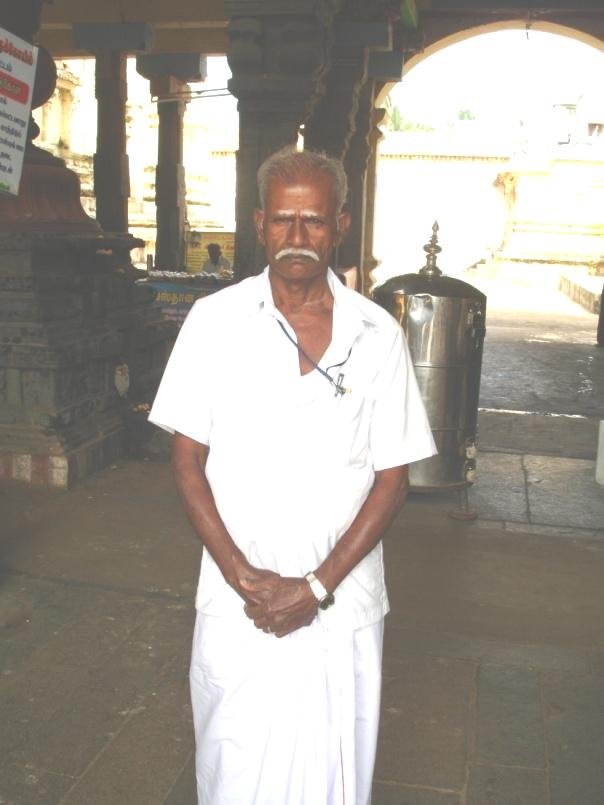 Designation in temple–Tolilali, living in the temple premises for 35 years.
Date of Interview–25.12.2011.

1. Can you please tell us the story about Adi Kumbesvarar?

A. During Pralaya that is when the creation was coming to an end through great floods, Brahma went to Lord Siva and said “Since the world is coming to an end and all my creation is going to be destroyed, please do something so that some life forces can be carried on to the next Yuga”. Siva told him that some seeds of life should be put in a Kumbha and sealed and kept in Bhuloka and worshipped. Brahma did as he was told. When Pralaya came the Kumbha started floating away. Brahma asked Siva how to stop the Kumbha. Siva took the form of a hunter and shot an arrow at the Kumbha. The mouth of the Kumbha broke. The life forces flowed out and fell in different places. Where the Kumbha lodged itself it was bent to one side. Siva built a Siva Linga out of mud of the Kumbha and worshipped it. This became the main worship Sthala–the sanctum in Adi Kumbesvarar temple. The rest of the seeds–wherever they were scattered became other sacred places like Potramarai. The Kolam [Kola] in the entrance of the temple is called Kamadhenu Kolam. Initially when Siva came to worship the Linga here there was no water. He shot an arrow and brought out the water from underground. Since it was always filled with water it was called Kamadhenu Kolam.The other parts of the Kumbha like–mango leaf, coconut, Darbai, Punul, Bilva leaves–where ever they fell and got lodged they became other sacred areas and later temples like–Gautamesvarar, Adi Kambatta Vishvanathar, Kasi Vishvanathar, Banapurisvarar.

A. The Mahamaham [Mahamaha] tank is fed by 9 rivers–Sindhu, Ganga, Narmada, Kaveri, Godavari, Brahmaputra …….. Story behind–Once Agastya Muni was passing Devaloka and the nine Devakanyas teasingly said “Oh, the great Agastya Muni is passing”. The great Rsi took offence and pressed his hands on the rivers. The rivers stopped flowing. The girls ran to Kailamalai and prayed to Siva. Siva told them that they should not have made fun of the great Rsi of whom even he was careful. Siva told them that in the Masi month on Mahanakstram [Mahanakstra] day, Mahamaham will originate in Kumbakonam where all the nine rivers will converge. Siva said that when he would bathe in the Mahamaham, then all their sins would be washed away. Thus with the origin of Mahamaham in Kumbakonam , the Kanyas were released of their curse. They now wanted to return to Devaloka. By the side of the Kolam [Kola] is Vira Selva Madam where these Kanyas were kept along with two Dwarapalakas. The next day in the early morning hours these Kanyas are said to have gone back to Devaloka.

The Adi Kumbesvarar temple is ten centuries old. It was built during Chola time and maintained by Tirumala Nayakar. At the east entrance of the temple is the Kodimara Mandapam. Vannimara is the Sthala Vrksam [Vrksa] of the Kovil. Muttraveli Vinayaka is to the left.

3. Can you give some more information about the temple?

A. The Lord of the temple is Adi Kumbesvarar. Ambal’s name is Mangalambika. She is associated with seventy crore Mantra Pitham. She is very powerful. Praying to Ambal gives solutions to all your problems. Further there are Vigrahas of 63 Nayanmars, Sannidhis of Sarasvati, Laksmi, 108 Lingas [Lingams] and Karthikeya in the temple. Siva’s bedroom is called Palliarai, where he is allowed to sleep after Ardhajama Puja.

The priest in the temple is called Sivacarya. In the Garbha Graha the Lord is in the form of a Linga. No specific architecture is there of the Gopuram. The temple has four entrances in four directions. A special feature in the temple is–above Ambal’s Sannidhi there is a carving of Murugan with 6 faces and 6 hands. Unusual feature, since Murugan is always associated with 6 faces and 12 hands! Meaning associated–since Murugan was brought up by six Krittikas, he is shown with six hands.

4. What are the different Puja s done in the temple?

A. There are six Puja s done in the temple.

Kala Sandhi Puja around 9 am

God is offered rice as Prasadam. Only Somaskandar is offered Puliodare.

5. What are the main festivals celebrated in the temple?

A. Main festivals celebrated in the temple are–

Tiru Kalyanam celebrated during Vaikasi Visakham [Visakha] month, during which Ambal is married with all pomp and glory. She is given lots of vessels as dowry.

In Adipura, Ambal is believed to attain puberty. She is taken to the Mahamaham [Mahamaha] and given oil bath. Several young girls take a dip in the tank on this day.

6. What is the greatness of Mahamaham?

There are stone edicts available in the temple but the inscriptions are in Lipi which is not understandable to common man. Books are available on the historical data of the temple in shops outside giving all details