Aghasura means something in Hinduism, Sanskrit. If you want to know the exact meaning, history, etymology or English translation of this term then check out the descriptions on this page. Add your comment or reference to a book if you want to contribute to this summary article. 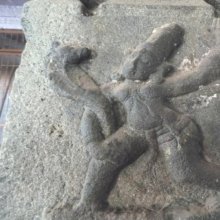 Aghāsura (अघासुर) refers to:—A mystic demon who assumed the form of a large serpent and swallowed Kṛṣṇa and his cowherd boy friends, but was killed by Kṛṣṇa. He was the younger brother of the demons Pūtanā and Bakāsura. (cf. Glossary page from Śrī Bṛhad-bhāgavatāmṛta).

Aghāsura (अघासुर) is depicted as a sculpture on the second pillar of the southern half of the maṇḍapa of the temple of Lokeśvara.—Next to the Pralaṃbāsura is the scene of slaying Aghāsura. On seeing Balarāma and Kṛṣṇa, the demon Agha thought that the time had come for him to avenge the death of his sister Pūtanā and his brother Baka (as it is not shown in the bas-relief, we have not dealt with it here).

It is not very easy to show this story on stone. So the artist has demonstrated his talents by showing the demon knocked down by Kṛṣṇa. By controlling the demon with his left hand so that he will not have any chance to escape, Kṛṣṇa is raining good blows on the head with the right hand. A female figure is shown standing next to the demon with folded hands. May be it is one of the Gopī or Kṛṣṇa’s mother, dumb founded at the astonishing exploits of her supernatural child. Behind him is standing Balarāma with his hala.

Aghāsura (अघासुर, “boa-constrictor demon”) is the Sanskrit name of a demon (asura) sent by Kaṃsa (Kṛṣṇa’s maternal uncle) to kill Kṛṣṇa. These efforts did not succeed.

[«previous (A) next»] — Aghasura in Sanskrit glossary
Source: DDSA: The practical Sanskrit-English dictionary

Aghāsura is a Sanskrit compound consisting of the terms agha and asura (असुर).

Search found 13 books and stories containing Aghasura, Aghāsura, Agha-asura; (plurals include: Aghasuras, Aghāsuras, asuras). You can also click to the full overview containing English textual excerpts. Below are direct links for the most relevant articles:

Verse 2.1.338 < [Chapter 1 - The Beginning of the Lord’s Manifestation and His Instructions on Kṛṣṇa-saṅkīrtana]

Verse 2.1.161 < [Chapter 1 - The Beginning of the Lord’s Manifestation and His Instructions on Kṛṣṇa-saṅkīrtana]