Virupaksha means something in Buddhism, Pali, Hinduism, Sanskrit, the history of ancient India. If you want to know the exact meaning, history, etymology or English translation of this term then check out the descriptions on this page. Add your comment or reference to a book if you want to contribute to this summary article.

The Sanskrit terms Virupākṣa and Virūpākṣa can be transliterated into English as Virupaksa or Virupaksha, using the IAST transliteration scheme (?). 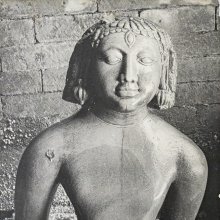 Virūpākṣa (विरूपाक्ष) is a Sanskrit name referring to one of the eight manifestations of Ruru, who is a form of Bhairava. According to the Rudrayāmala, there are eight main forms of Bhairava who control the eight directions of this universe. Each form (eg., Ruru) has a further eight sub-manifestations (eg., Virūpākṣa), thus resulting in a total of 64 Bhairavas.

When depicting Virūpākṣa according to traditional iconographic rules (śilpaśāstra), one should depcit him (and other forms of Ruru) having a pure white color, adorned with ornaments set with rubies; he should carry an akṣamālā, the aṅkuśa, a pustaka and a vīṇā. The word Śilpaśāstra refers to an ancient Hindu science of arts and crafts, dealing with subjects such as painting, sculpture and iconography.

1) Virūpākṣa (विरूपाक्ष).—One of the elephants which hold up the earth from Pātāla (underworld). It is said that earthquake occurs when this elephant shakes its head. (For details see under Aṣṭadiggajas).

2) When Sugrīva devastated the army of Rāvaṇa and caused havoc among the giants, Virūpākṣa, who was an archer got on an elephant and entered the battlefield. He confronted Sugrīva first. He thwarted the stone flung at him by Sugrīva, and struck him. For a time Sugrīva found it difficult to withstand him. But in the battle which followed, Sugrīva struck Virūpākṣa down and killed him. (Vālmīki Rāmāyaṇa, Yuddha Kāṇḍa, Sarga 97).

3) Virūpākṣa (विरूपाक्ष).—One of the thirtythree notorious Dānavas (demons) born to Prajāpati Kaśyapa by his wife Danu. It is stated in Mahābhārata, Ādi Parva, Chapter 67, Stanza 22, that it was this asura called Virūpākṣa, who had, later, taken rebirth as King Citravarmā.

Virūpākṣa (विरूपाक्ष) refers to “odd-eyed” and represents a name of Śiva. He is called Virūpākṣa ‘odd-eyed’, because he is represented as having three eyes: two on either side of the nose and one on the forehead.

1a) Virūpākṣa (विरूपाक्ष).—A son of Danu, and a follower of Vṛtra in his battle with Indra.*

1b) Another name for Śiva having the sun, moon and fire for eyes.*

1f) The lord of the south-west direction.*

Virūpākṣa (विरूपाक्ष) is a name mentioned in the Mahābhārata (cf. I.59.25, I.65, I.61.22) and represents one of the many proper names used for people and places. Note: The Mahābhārata (mentioning Virūpākṣa) is a Sanskrit epic poem consisting of 100,000 ślokas (metrical verses) and is over 2000 years old.

Virūpākṣa (विरूपाक्ष) is the Sanskrit name of a deity presiding over Hemakūṭa, one of the sixty-eight places hosting a svāyambhuvaliṅga, which is one of the most sacred of liṅgas according to the Śaivāgamas. The list of sixty-eight svāyambhuvaliṅgas and presiding deities (eg., Virūpākṣa) is found in the commentary on the Jirṇoddhāra-daśaka by Nigamajñānadeva. The word liṅga refers to a symbol used in the worship of Śiva and is used thoughout Śaiva literature, such as the sacred Āgamas.

[«previous (V) next»] — Virupaksha in Dharmashastra glossary
Source: archive.org: The religion and philosophy of the Veda and the Upanishads (dharmashastra)

Virūpākṣa (विरूपाक्ष) is the name of a deity to be invoked in a certain ritual, according to the Mānavagṛhyasūtra 2.14. Accordingly, the deity is prescribed when one suffers from possession by the Vināyakas, Śālakaṭaṅkaṭa, Kūṣmāṇḍarājaputra, Usmita and Devayajana. The Baijavāpagṛhyasūtra replaces the names of last two vināyakas with Mita and Sammita. According to R. C. Hazra in his Gaṇapati-worship, “this rite is both expiatory and propitiatory in nature and in which various things including meat and fish (both raw and cooked) and wine and cakes are to be offered”..

The gṛhya-sūtras are a branch of dharma-sūtras and refer to a category of Vedic literature dealing with domstic rites and rituals. The Mānava-gṛhya-sūtra belongs to the Kṛṣṇa-yajurveda. The Baijavāpa-gṛhya-sūtra is known only through references to it in other works (eg., Vīramitrodaya-Saṃskāra).

Virūpākṣa (विरूपाक्ष) is the name of a Yakṣa who, due to Kubera’s curse, was born on the earth as the son of a certain Brāhman, according to the Kathāsaritsāgara, chapter 34. Accordingly, “the God of Wealth had for servant a Yakṣa named Virūpākṣa, who had been appointed chief guardian of lacs of treasure. And he delegated a certain Yakṣa to guard a treasure lying outside the town of Mathurā, posted there like an immovable pillar of marble”.

The story of Virūpākṣa is narrated to king Udayana by his minister Yaugandharāyaṇa in order to demonstrate that “heavenly beings, on account of certain causes, descend from heaven to the earth, by the appointment of fate, and, because they are free from sin, they are not born in the usual way”.

The Kathāsaritsāgara (‘ocean of streams of story’), mentioning Virūpākṣa, is a famous Sanskrit epic story revolving around prince Naravāhanadatta and his quest to become the emperor of the vidyādharas (celestial beings). The work is said to have been an adaptation of Guṇāḍhya’s Bṛhatkathā consisting of 100,000 verses, which in turn is part of a larger work containing 700,000 verses.

Virūpākṣa (विरूपाक्ष) is a name of Śiva, as mentioned in the 9th century Hayaśīrṣa-pañcarātra (Ādikāṇḍa chapter 1).—“[...] Formerly, it is told, Virūpākṣa-Maheśvara (i.e., Śiva) with Gaurī (i.e., Pārvatī) questioned the four-faced one (Brahmā) who was staying in the above of Vairāja”.

Virūpākṣa (विरूपाक्ष) is the husband of Khagānanā: the name of a Ḍākinī (‘sacred girl’) presiding over Himālaya: one of the four Upacchandoha (‘sacred spot’) present within the Vākcakra (‘circle of word’), according to the 9th-centruy Vajraḍākatantra. The Vākcakra is one of three Cakras within the Tricakra system which embodies twenty-four sacred spots or districts resided over by twenty-four Ḍākinīs whose husbands (viz., Virūpākṣa) abide in one’s body in the form of twenty-four ingredients (dhātu) of one’s body.

Khagānanā has for her husband the hero (vīra) named Virūpākṣa. She is the presiding deity of Himālaya and the associated internal location is the ‘penis’ and the bodily ingredients (dhātu) are the ‘middle of the hair parting’.

Virūpākṣa (विरूपाक्ष) is the name of a Vīra (hero) who, together with the Ḍākinī named Khagānanā forms one of the 36 pairs situated in the Vajracakra, according to the 10th century Ḍākārṇava chapter 15. Accordingly, the vajracakra refers to one of the four divisions of the sahaja-puṭa (‘innate layer’), situated within the padma (lotus) in the middle of the Herukamaṇḍala. The 36 pairs of Ḍākinīs and Vīras [viz., Virūpākṣa] each have one face and four arms; they hold a skull bowl, a skull staff, a small drum and a knife; they are dark-bluish-black in color.

Virūpākṣa (विरूपाक्ष) refers to the first of the “four world protectors” (caturlokapāla) as defined in the Dharma-saṃgraha (section 7). The Dharma-samgraha (Dharmasangraha) is an extensive glossary of Buddhist technical terms in Sanskrit (eg., caturlokapāla and Virūpākṣa). The work is attributed to Nagarguna who lived around the 2nd century A.D.

The king of the Nagas is Virupaksha, one of the four Lokapala, or Celestial Guardians of the Four Cardinal Points. His kingdom is the continent west of Mount Meru but the chief residence of the Nagas is Bhogavati, 3,000 yoganas under the sea.

Virūpākṣa is one of the eight temples located in a space to the north of the village Paṭṭadakal, arrayed in a rectangle of about 180 x 140 m on the western bank of the river.

Virūpākṣa (विरूपाक्ष).—(= Pali Virūpakkha), (1) name of one of the ‘world-guardians’, see s.v. mahārāja(n); Viru° (m.c.) Samādhirājasūtra p. 42 line 4; guardian of the west, and lord of nāgas; doubtless intended by the nāga-king of this name Mahā-Māyūrī 247.18; (2) pl., used (as also in Pali) of nāgas, pre- sumably as followers of Virūpākṣa: Mahā-Māyūrī 221.15; (3) sg., Virūpākṣaḥ (alone!) as final colophon, Sādhanamālā 601.4, perhaps meant as name of the author of the last section? (But the usual way in Sādhanamālā of indicating authors' names is something like kṛtiḥ plus gen. of the name.)