Vastu means something in Hinduism, Sanskrit, Jainism, Prakrit, the history of ancient India, Marathi, Hindi. If you want to know the exact meaning, history, etymology or English translation of this term then check out the descriptions on this page. Add your comment or reference to a book if you want to contribute to this summary article. 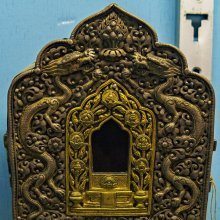 Vāstu (वास्तु) is a Sanskrit technical term denoting a “residence” in general, according to the lists of synonyms given in the Mayamata XIX.10-12, which is a populair treatise on Vāstuśāstra literature.

The Sanskrit word Vastu means a dwelling or house. The Vastu, takes the meaning of “the site or foundation of a house, site, ground, building or dwelling-place, habitation, homestead, house”. The underlying root is Vas “to dwell, live, stay, abide”.

Source: McGill: The architectural theory of the Mānasāra

Vāstu (वास्तु).—Chapter III of the Mānasāra recounts that the wise sages “identified” locales that were fit for the dwelling of gods and humans. They called these sites vāstu, the primal architectural “object”, which, by creative intervention of humans, was to be transformed into vāstu, “dwelling”. Sacred architecture begins, thus, by perceiving divine presence at a particular location.

Vāstu (वास्तु) is another name (synonym) for Vāstūka, which is a Sanskrit name for the plant Chenopodium album (lamb’s quarters). This synonym was identified by Narahari in his 13th-century Rājanighaṇṭu (verses 7.122-123), which is an Ayurvedic medicinal thesaurus.

Vāstu (वास्तु) refers to the name of a River mentioned in the Mahābhārata (cf. VI.10.24). Note: The Mahābhārata (mentioning Vāstu) is a Sanskrit epic poem consisting of 100,000 ślokas (metrical verses) and is over 2000 years old.

1) Vastu (वस्तु, “plot”) refers to the “subject-matter” of a dramatic play (nāṭya), also known as Itivṛtta, according to the Nāṭyaśāstra chapter 20-21. The subject-matter (vastu) of a Nāṭaka may be twofold:

2) Vastu (वस्तु) refers to one of the twenty aspects of tāla (time-measure), according to the Nāṭyaśāstrahapter chapter 28. In musical performance, tāla refers to any rhythmic beat or strike that measures musical time. It is an important concept in ancient Indian musical theory (gāndharvaśāstra) traceable to the Vedic era.

3) Vastu (वस्तु) refers to the “theme” of songs (dhrūva) according to the Nāṭyaśāstra 32.400:—“the theme (vastu) arises from a locality, and may relate to a city or a forest”.

Vastu is a technical word meaning principal parts of songs. This is probably equivalent to what the singers of North India call tuk in connexion with Dhrupada songs. See Gītasūtrasāra (Bengali). p. 78. This word (Vastu) has been used by Kālidāsa (Mālavi. II. 0. 5; 3.1; 4.1.) It also means a song, and is equivalent to the term. cīj. (lit. thing) used by the modern North Indian singers. See Śārṅgadeva’s Saṃgītaratnākara V. 6; V. 61ff.
2)

Vastu (वस्तु, “a thing”).—Something which is exclusively composed of regular words and musical metre is called a vastu (lit, “thing”). One should known that prabandha, vastu and rūpaka are the three names of composed music (nibaddha) based on regular words (pada) and the other phrasal elements (aṅga). (cf. Saṅgītaśiromaṇi 13.6)

Vāstu (वास्तु) is the name of a prodigious demon, who was killed by 53 gods. These gods are worshipped and bali-offerings are given to them. (see Balimaṇḍapa, ‘a temporary hall created for ceremonial occasions’).

Vastu (वस्तु, “plot”) refers to one of the primary or the principal characteristics of a Mahākāvya (‘epic poem’).—Plot or Vastu is the foundation of a Mahākāvya. It is an aggregate of all incidents and episodes brought home to the reader. [...] The plot of a Mahākāvya, on the whole consists essentially of the five elements of the story, five stages of actions, and five junctures with its various sub-divisions.

Vāstu (वास्तु, “houses”) refers to one of the classes of the external (bahya) division of attachment (parigraha) and is related to the Aparigraha-vrata (vow of non-attachment). Vāstu is listed in Śvetāmbara sources such as Devagupta’s Nava-pada-prakaraṇa with Laghu-vṛtti (58), and in Digambara sources such Cāmuṇḍarāya’s Caritrasāra (p. 7).

Houses (vāstu) are of three types:

Vāstu.—(EI 15, 32), homestead land. Note: vāstu is defined in the “Indian epigraphical glossary” as it can be found on ancient inscriptions commonly written in Sanskrit, Prakrit or Dravidian languages.

1) Vastu (वस्तु).—n (S) A thing in general; any article or substance; any affair, business, or matter. Note. This word will often be used in the feminine gender, and written indifferently with stu & stū. Viewed and written as a Sanskrit word it should always be neuter. 2 The main plot (of a play or poem).

vāstu.—n f S A house or habitation; a place of abode.

vāstu.—ind The sign of the third case, answering to nēṃ or By.

4) vāstū (वास्तू).—f Ceremonies towards the composing of evil spirits observed on entering into a new house.

1) A really existing thing, the real, a reality; वस्तुन्यवस्त्वारोपोऽज्ञानम् (vastunyavastvāropo'jñānam)

1) The site of a house, building ground, site.

Bhūmi 5: the ground difficult to conquer (sudurjayā) < [Chapter XX - (2nd series): Setting out on the Mahāyāna]