Vastushastra means something in Hinduism, Sanskrit. If you want to know the exact meaning, history, etymology or English translation of this term then check out the descriptions on this page. Add your comment or reference to a book if you want to contribute to this summary article.

The Sanskrit term Vāstuśāstra can be transliterated into English as Vastusastra or Vastushastra, using the IAST transliteration scheme (?). 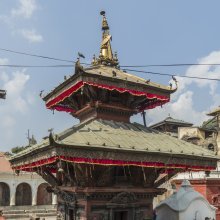 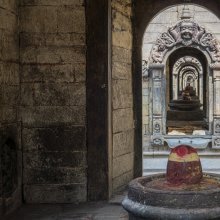 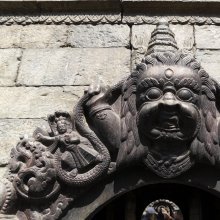 Vāstuśāstra (वास्तुशास्त्र) refers to the “knowledge of the science” and represents the first qualification which an architect [i.e., sthapati] must possess to start with. This Vāstuśāstra consists of the knowledge of the canons of the site-planning and its layout, the planning of the buildings, the laying out of gardens, parks, town-planning and regional planning and all that constitutes the traditional subject-matter of architecture. All this comes under śilpa. Apart from śilpa, his intellectual equipment should be broadened with the knowledge of carpentery, engineering, machine-making (yantra-karma-vidhi) etc.

Vastu-shastra (also Vastu-veda and Vastu-vidya), “science of construction”, “architecture” is an ancient Hindu system of architecture which consists of principles born out of a traditional view on how the laws of nature affect human dwellings. The doctrine of Vastu Shastra is concerned primarily with architecture—building houses, temples, apartments and other buildings.

The Sanskrit word Vastu means a dwelling or house. The vastu, takes the meaning of “the site or foundation of a house, site, ground, building or dwelling-place, habitation, homestead, house”. The underlying root is Vas "to dwell, live, stay, abide".

The term Shastra may be translated as “science, doctrine, teaching”. Historians such as James Ferguson, Sir Cunningham, Dr. Havell have suggest that Vastu Shastra developed between the period of 6000 BCE to 3000 BCE, adding that Harappa, Mohenjo-daro stands on the principles of Vastu Shashtra.

Vastu Shastra was formulated by our ancestors nearly 4000 years ago, as a vedic science of layout and planning of buildings, and it has evolved over the centuries as a result of man’s efforts to improve his standard of living. Vastu Shastra is a Vedanga, a branch of Sthapatya Veda, which in turn is a part of Yajur Veda.

Source: McGill: The architectural theory of the Mānasāra

Vāstuśāstra (वास्तुशास्त्र).—In the Mānasāra, the “origin” of vāstuśāstra is treated in the following verse (1.3-4): “The science of architecture was uttered by the mouths (taught) of the one who carries Gaṅgā on his head (Śiva), the lotus-born (Brahmā), the lotus-eyed (Viṣṇu), Indra, the one whose speech is like arrow (Bṛhaspati), and of all the great sages; and is indeed also elaborated by the sage Mānasāra on all kinds of abjects (topics)”.

The c1aim that vāstuśāstra precedes its practice by virtue of its divine origin is attested by the simultaneous c1aim that the guild of builders also have a divine origin. The text elaborates the divine genealogy of the guild in detai1.

Vāstuśāstra (वास्तुशास्त्र).—Architectural regulations in connection with buildings of palaces and houses: authors of the science, origin and worship of Vāstu detailed: the halls and types of pillars as also types of wood to be used.*

The thirty-two plans of the Mānasāra < [Notes]