Shari means something in Buddhism, Pali, Hinduism, Sanskrit, Marathi, Jainism, Prakrit, Hindi, biology. If you want to know the exact meaning, history, etymology or English translation of this term then check out the descriptions on this page. Add your comment or reference to a book if you want to contribute to this summary article.

The Sanskrit term Śāri can be transliterated into English as Sari or Shari, using the IAST transliteration scheme (?). 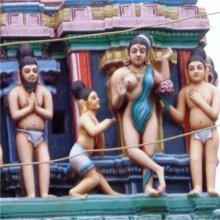 Sāri (सारि) refers to the bird “Common myna” (Acridotheres tristis).—Birds have been described in several ancient Sanskrit texts that they have been treated elaborately by eminent scholars. These birds [viz., Sāri] are enumerated in almost several Smṛtis in context of specifying the expiations for killing them and their flesh being used as a dietary article to give satisfaction to the manes (Pitṛs) in Śrāddha rites. These are elaborated especially in the Manusmṛti, Parāśarasmṛti [chapter VI], Gautamasmṛti [chapter 23], Śātātapasmṛti [II.54-56], Uśānasmṛti [IX.10-IX.12], Yājñavalkyasmṛti [I.172-I.175], Viṣṇusmṛti [51.28-51.29], Uttarāṅgirasasmṛti [X.16].

Sari in the Tangkhul language is the name of a plant identified with Ocimum americanum L. from the Lamiaceae (Mint) family having the following synonyms: Ocimum canum Sims, Ocimum album, Ocimum thymoides. For the possible medicinal usage of sari, you can check this page for potential sources and references, although be aware that any some or none of the side-effects may not be mentioned here, wether they be harmful or beneficial to health.

Sārī (सारी) is another name for Sātalā, an unidentified medicinal plant (seven possible species identifed), according to verse 4.194-195 of the 13th-century Raj Nighantu or Rājanighaṇṭu. The fourth chapter (śatāhvādi-varga) of this book enumerates eighty varieties of small plants (pṛthu-kṣupa). Together with the names Sārī and Sātalā, there are a total of thirteen Sanskrit synonyms identified for this plant.

Mother of Śāriputra, but it also represents a particular bird's name (sanskrit 'the śārī birds').

A brahminee, mother of Sariputta (1) (q.v.). Her full name was Rupasari.

Śāri (शारि) is the daughter of Māṭhara: a Brāhmin from Rājagṛha according to the 2nd century Mahāprajñāpāramitāśāstra (chapter XVI). Accordingly, “Because this man [Māṭhara] was very skillful in debate, the king had given him as a privilege a large village situated not far from the capital. This Māṭhara married and his wife bore a daughter; because the eyes of this young girl resembled those of the Chö li (śāri, the heron) bird, she was called Śāri; later the mother bore a son whose knee-bones were very big, and for that reason he was called Kiu hi lo (Kauṣṭhila). After this Brāhmin married, he was busy raising his son and daughter; he forgot all the holy books he had studied and he did not put his mind to acquiring new knowledge”.

sarī (सरी).—f (sara) A wire (of whatever metal). 2 An ornament for the neck of females, consisting of a chain of twisted (gold or silver) wire. Pr. gaḷāṃ nāhīṃ sarī sukhī nidrā karī; Pr. kōṇhīṃ ghātalī sarī kōṇhīṃ ghātalī dōrī (paṇa gaḷaphāsa basēla). 3 A narrow shred or slip off from a bamboo &c. 4 A water-channel (as in a garden-bed along a row of plants): also the line occupied by such a row, a row. 5 A line of loose texture from the turning aside of the threads. 6 The line along the top of a wall. 7 The laga or connecting beam of postheads (as along a veranda). 8 A ring of earth pressed around the mouth of a handmill (to add weight to the upper leaf). The ring is sometimes of stone. Called also mātīcā pēṇḍa & dagaḍācā pēṇḍa. 9 A clavicle or collar-bone. 10 An interior or subdividing ridge of a vāphā or garden-bed. 11 Equaling or rivaling; asserting or exhibiting equality with. Usually neg. con. v yē g. of s.

3) A quarter of the compass.

Sari is a Sanskrit compound consisting of the terms sa and ri (रि).

13) [v.s. ...] Name of a daughter of Māṭhara (wife of Tiṣya and mother of the first disciple of Gautama Buddha; cf. śāri-putra), [Buddhist literature]

1) Sari (सरि) in the Prakrit language is related to the Sanskrit word: Sadṛś.

2) [noun] a piece or pawn used in chess, having very limited movements.

2) [verb] to run away or escape from danger, pursuit, unpleasantness, etc.; to flee.

8) [verb] to insert (something) into with force.

9) [verb] to make changes so as to fit, conform; to make (something) suitable; to adjust.

12) [verb] to stop because of indecision; pause or delay in acting, choosing or deciding because of feeling unsure or lack of confidence.

2) [noun] the act or an instance of slipping (as from the hand).

1) [noun] a surface declined deeply as on the side of a mountain; mountain-slope.

2) [noun] a rock pillar, a mass of rock stretching above, on a mountain.

4) [noun] a stone set up to show the boundary of a land, village, town, revenue divisions, etc.; a boundary-stone.

6) [noun] the quaity of being big or large; largeness.

7) [noun] the quality or state or being strong; strength.

3) [noun] the fact of being not wrong; correctness.

4) [noun] the share that is due or one is legally, morally eligible for.

5) [noun] (arith.) any number that is exactly divisible by the number two (i.e. without leaving a remainder); an even number.

7) [noun] a thing that has actually happened or that is really true; fact.

Sari (ಸರಿ):—[noun] a group of things placed, thrown or lying one on another; a pile; a heap.

Sari (ಸರಿ):—[noun] a continuous pouring (as of rain water).

1) [noun] a surface declined deeply as on the side of a mountain; mountain-slope.

2) [noun] a rock pillar, a mass of rock stretching above, on a mountain.

4) [noun] a stone set up to show the boundary of a land, village, town, revenue divisions, etc.; a boundary-stone.

6) [noun] the quaity of being big or large; largeness.

7) [noun] the quality or state or being strong; strength.

Sāri (ಸಾರಿ):—[noun] a time or opportunity for action which comes in due rotation or order to each of a number of persons, animals, etc.; a time; a turn.

Sāri (ಸಾರಿ):—[noun] a garment worn by Indian women, consisting of a long piece of cotton or silk wrapped around the body with one end draped over the head or over one shoulder; sari.

Sāri (ಸಾರಿ):—[noun] (dance.) any of several movements on the floor ( as with the feet) or in air (as of hands) in dancing.

Sāri (ಸಾರಿ):—[noun] a pavilion or seat fixed on an elephant’s back; a howdah.

3) [noun] a respectful mode of addressing.

4) [noun] a respectful mode of addressing a person’s coming.

5) [noun] a number of persons or things moving forward in an orderly, formal way; a procession.

6) [noun] an arch-shaped shelter fitted on to bullock carts.

Act 5.3: Description of the six tremblings of the earth (bhūmicala) < [Chapter XIV - Emission of rays]

Verse 6.18.38 < [Chapter 18 - In the Course of Describing the Glories of Siddhāśrama, a Description of the Rāsa-dance Festival]