Shardula means something in Buddhism, Pali, Hinduism, Sanskrit, Jainism, Prakrit, Marathi, Hindi. If you want to know the exact meaning, history, etymology or English translation of this term then check out the descriptions on this page. Add your comment or reference to a book if you want to contribute to this summary article.

The Sanskrit term Śārdūla can be transliterated into English as Sardula or Shardula, using the IAST transliteration scheme (?).

Alternative spellings of this word include Shardul. 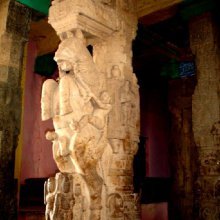 Śārdūla (शार्दूल) refers to one of the 23 types of dohā metres (a part of mātrā type) described in the 1st chapter of the Vṛttamauktika by Candraśekhara (17th century): author of many metrical compositions and the son of Lakṣmīnātha Bhaṭṭa and Lopāmudrā.

Śārdūla (शार्दूल).—A spy of Rāvaṇa. It was he, who informed Rāvaṇa about the arrival of Rāma. (Vālmīki Rāmāyaṇa, Yuddhakāṇḍa, Canto 30).

Śārdūla (शार्दूल) refers to a “tigers”, acting as Vīrabhadra’s body-guards”, according to the Śivapurāṇa 2.2.33. Accordingly, as Brahmā narrated to Nārada:—“[...] Receiving his command, with his head bowed down in reverence, Vīrabhadra set off immediately to the place of sacrifice. [...] Many strong lions, tigers (śārdūla), crocodiles, huge fishes and thousands of elephants constituted his body-guard”.

Śārdūla (शार्दूल) refers to “tigers” (living in the forest), according to the Rāmāyaṇa chapter 2.29. Accordingly:—“[...] Sītā was distressed to hear these words of Rāma and spoke these words slowly, with her face with tears: ‘[...] Oh Rāma! Antelopes, lions, elephants, tigers (śārdūla), Śarabhas (legendary animal with eight legs), birds, yaks and all others which roam in the forest, run away after seeing your form, since they have never seen your figure before. When there is cause for fear, who would not have fear?’”.

Śārdūla (शार्दूल) (lit. “one who is fabulous”) is a synonym (another name) for either the Lion (Siṃha) or the Tiger (Vyāghra), according to scientific texts such as the Mṛgapakṣiśāstra (Mriga-pakshi-shastra) or “the ancient Indian science of animals and birds” by Hamsadeva, containing the varieties and descriptions of the animals and birds seen in the Sanskrit Epics such as the Ramayana and Mahabharata.

Śārdūla (शार्दूल) refers to “tigers”, according to the Bṛhatsaṃhitā (chapter 12), an encyclopedic Sanskrit work written by Varāhamihira mainly focusing on the science of ancient Indian astronomy astronomy (Jyotiṣa).—Accordingly, “Hear now the effects of the heliacal rising of Canopus (Agastya), a star sacred to Agastya who suppressed the Vindhya mountains whose soaring heights obstructed the course of the Sun; [...] whose summits appeared to score the starry vault; whose rocks were full of buzzing bees scared by the violent pulling of flower trees by wild elephants and were also the abodes of hyenas, of bears, of tigers and of monkeys [i.e., tarakṣa-ṛkṣa-śārdūla-śākhāmṛga-adhyāsita]; through which lay the secret course of the Ravi which appeared to embrace its bosom with the affection of a mistress; and in whose forests dwelt the Devas and also Brāhmaṇa recluses, some subsisting on water, some on roots, some on the air and some altogether without food”.

[«previous (S) next»] — Shardula in Tibetan Buddhism glossary
Source: academia.edu: The Structure and Meanings of the Heruka Maṇḍala

Śārdūla (शार्दूल) is the name of a Vīra (hero) who, together with the Ḍākinī named Śārdūlī forms one of the 36 pairs situated in the Medinīcakra, according to the 10th century Ḍākārṇava chapter 15. Accordingly, the medinīcakra refers to one of the three divisions of the dharma-puṭa (‘dharma layer’), situated in the Herukamaṇḍala. The 36 pairs of Ḍākinīs and Vīras [viz., Śārdūla] are yellow in color; the shapes of their faces are in accordance with their names; they have four arms; they hold a skull bowl, a skull staff, a small drum, and a knife.

Śārdūla (शार्दूल) participated in the war between Rāma and Rāvaṇa, on the side of the latter, as mentioned in Svayambhūdeva’s Paumacariu (Padmacarita, Paumacariya or Rāmāyaṇapurāṇa) chapter 57ff. Svayambhū or Svayambhūdeva (8th or 9th century) was a Jain householder who probably lived in Karnataka. His work recounts the popular Rāma story as known from the older work Rāmāyaṇa (written by Vālmīki). Various chapters [mentioning Śārdūla] are dedicated to the humongous battle whose armies (known as akṣauhiṇīs) consisted of millions of soldiers, horses and elephants, etc.

2) A leopard or panther.