Catura means something in Hinduism, Sanskrit, Jainism, Prakrit, Buddhism, Pali, the history of ancient India, Marathi, Hindi. If you want to know the exact meaning, history, etymology or English translation of this term then check out the descriptions on this page. Add your comment or reference to a book if you want to contribute to this summary article.

Alternative spellings of this word include Chatura. 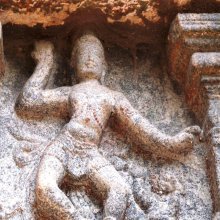 1) Catura (चतुर).—One of the 108 karaṇas (minor dance movement) mentioned in the Nāṭyaśāstra chapter 4. The instructions for this catura-karaṇa is as follows, “the left hand with Añcita, (i.e., Alapallava) gesture, the right hand with Catura gesture, the right feet in Kuṭṭita (i.e. Udghaṭṭita) pose.”. A karaṇa represents a minor dance movements and combines sthāna (standing position), cārī (foot and leg movement) and nṛttahasta (hands in dancing position).

3) Catura (चतुर) also refers to a gesture (āṅgika) made with a ‘single hand’ (asaṃyuta), according to the Nāṭyaśāstra chapter 8. The hands (hasta) form a part of the human body which represents one of the six major limbs (aṅga) used in dramatic performance. With these limbs are made the various gestures (āṅgika), which form a part of the histrionic representation (abhinaya).

(Instructions): The four fingers stretched and the thumb bent near the middle finger. (Uses): It is to be applied in representing policy, discipline, penance, cleverness, a young girl, a sick person, perfidy, gambling, proper words, salutary truth, and tranquillity.

1) One of six movements of the Brows: Catura: the brows meeting and faintly quivering. It is used in touching one another’s face, heart’s bliss, and excitement.

2) One of the Twenty-eight Single Hands (hasta):—Catura: the thumb is bent to touch the base of the third finger, the first and adjoining fingers outstretched together, and the little finger extended (separately). Usage: musk, a little,gold, copper etc., wet, sorrow, aesthetic emotion (rasāsvāda),eyes, difference of caste, oath, playful converse (sarasa), slowstepping,breaking to pieces, seat (āsana), oil or ghī, etc.

According to another book: in the Patāka hand, the thumb is made to touch the middle line of the third finger, and the Kttlefinger is stretched out. It originates from Kaśyapa, who usedthis hand to show the way to Garuḍa when he wished to steal thenectar. Its sage is Valakhilya, its colour variegated, its racemixed, its patron deity Vainateya. Usage: gorocana, dust, playful converse, red paint (laktaka), concentration of mind (or attention), camphor, eye, chin, earring, face, brow, side glance, beloved, policy, musk, sugar, honey, oil, ghī, cleverness, mirror, gold, diamond, emerald, sufiiciency, a little, a moderate quantityof anything, indigo, white colour, mixed caste, sword, cheek, tip of the ear.

Catura (चतुर) refers to “expanding the eye-brows slightly up”, and is classified as one of the seven movements of the eye-brows, which forms a part of upāṅga (minor body-parts) in Nāṭyaśāstra. Catura can be used in amorous gestures, grace, calmness, touching.

[«previous (C) next»] — Catura in Jainism glossary
Source: The University of Sydney: A study of the Twelve Reflections

Caturā (चतुरा) refers to “skilful (examination)”, according to the 11th century Jñānārṇava, a treatise on Jain Yoga in roughly 2200 Sanskrit verses composed by Śubhacandra.—Accordingly, “A bad birth is hard to be accomplished even in a dream for him whose judgment, which is extremely skilful at examination (vicāra-caturā) like a door-keeper, shines in the mind. Having got rid of the multitude of imaginings, when the steady mind holds onto [its] nature, then it is indeed the best [form of] stopping the influx of karma for a mendicant”.

Catura.—cf. caturaka; a square. Note: catura is defined in the “Indian epigraphical glossary” as it can be found on ancient inscriptions commonly written in Sanskrit, Prakrit or Dravidian languages.

(-raḥ) A small round pillow for resting the cheek upon. n.

8) ([scilicet] hasta) a particular position of the hand, [Purāṇa-sarvasva]

Catura (चतुर) in the Sanskrit language is related to the Prakrit word: Caura.

1) [adjective] having or showing an alert mind or high intelligence; clever; intelligent; wise.

1) [noun] the quality of being ingenious; cleverness; ingenuity.

2) [noun] the act of speaking pleasing words (mainly to gratify another).

Search found 12 books and stories containing Catura, Cātura, Cātūra; (plurals include: Caturas, Cāturas, Cātūras). You can also click to the full overview containing English textual excerpts. Below are direct links for the most relevant articles:

Verse 2.9.174 < [Chapter 9 - The Lord’s Twenty-One Hour Ecstasy and Descriptions of Śrīdhara and Other Devotees’ Characteristics]