Sculptures in temples in Kumbakonam: photo 517

Photo 517 of 640 in Gallery: Sculptures in temples in Kumbakonam 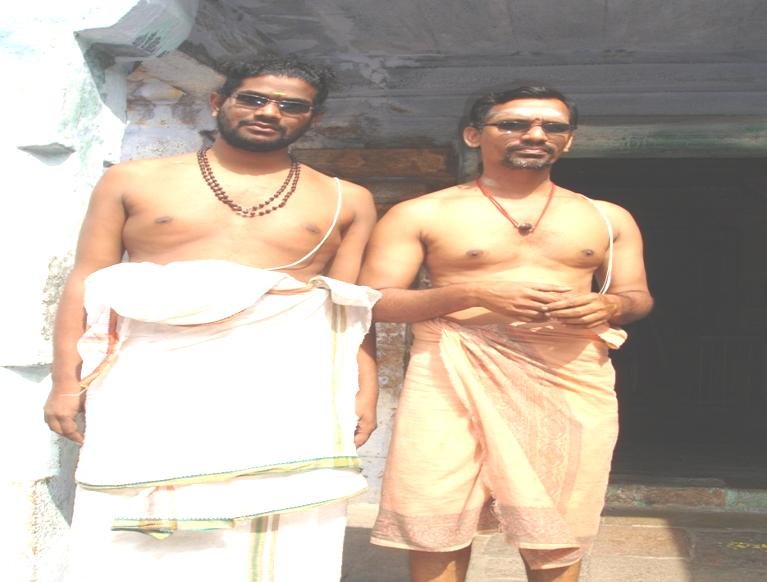 2. Why is the temple associated with Nagadosam?

A. Once in Kailasam,Vinayaka was prostrating before Sivan. At that time the Nagam or snake around Siva’s neck looked at Vinayaka with pride. Vinayaka got angry and told his father Siva. Siva cursed him. The snake lost its power and roamed from place to place praying and worshipping. When he was worshipping with severe repentance, Siva was moved and told him–“You must go to Kumbakonam where the Vilva leaf has lodged itself and there you must worship Vilvavanesvaran.” The Nagam worshipped Vilvavanesvaran during Mudalkala Puja on Sivaratri and he got back his powers. Siva blessed him saying that whoever has Nagadosam should pray in Nagesvarar Kovil and seek relief. Hence the significance of this temple. Svami is also

called Naga Isvarar meaning Lord of the snake. After this temple only comes the Tiru Nagesvarar Rahu Sthalam.

3. Why does Vinayaka have different names here? What is the significance?

4. What is the significance of Ardhanarisvara idol present in this temple?

A. All Devatas went to Siva in Kailasa and prayed that he dance as Ardhanarisvara. He said that he would appear at Bhaskara Ksetra at Kumbakonam during Pradosa Kala and there they would witness his dance at that time. He told them that they could witness his Natanam as Vilvavanesvarar. Hence in the Nataraja Sannidhi Svami is dancing. It is believed that as the Lord danced here Sivakami played the Talam and Lord Visnu played the flute. Hence it is also called as Venu Gopala Sannidhi. Ardhanarisvara idol is symbolic of the dance performed by Lord Vilvavanesvarar.

This temple is 1500 years old and was built by the Cholas. This temple is where Surya Bhagvan has also been blessed. Once Surya was cursed by a Rsi and the whole world was plunged into darkness. At that time Surya prayed to Lord Siva. The Lord told him to worship him as Vilvavanesvarar. Symbolic of this each year during Cittirai Masam 11th, 12th and 13th or April 24th, 25th and 26th between 6–6.30 am early morning, Surya’s rays fall on the Lingam in the Garbha Graha. It is reflected from the Gopuram. This is the marvel of the architecture.

This Lingam i s Pratistha Lingam meaning it has been concecrated by the Chola Kings. The Nagam around the Lord is the Kavacam. The Avadiyar of the Lingam is Caturam. Since Siva released the Nagam’s curse one prays in Nagesvarar Kovil to be freed of Naga Dosam and also at Tiru Nagesvarar Rahu Sthalam. This Lingam is made of stone which was brought from Nepal. This temple is older than Adi Kumbesvarar temple. Forty stone edicts have been found in this temple which have been taken by the Archaeological survey for research and study. This temple also falls under ASI control i.e. under the government. The Garbha Graha Vimana in the temple is Caturam. Sthala Vrksam is Vilva Maram.

5. What other Sannidhis are there in the temple?

A. Pralaya Kala Rudra Sannidhi–Siva is considered as the controller of Yama. Pralaya signifies Yama. Praying to him cures one of any debilitating disease. Two Apsaras–Urvasi and Rambha are present inside this Sannidhi.

Medha Daksinamurti Sannidhi is there who is facing the south. He is the god for intelligence. He gave Upadesa to the Rsis.

Visnu Durgai is in the Sannidhi holding Sankha and Cakra.–Once Parvati playfully closed Siva’s eyes. The whole world got plunged in darkness.The Devatas prayed to him. Isvara not wanting to hurt his wife opened his third eye. Parvati is sad that this happened because of her. She goes away to do penance for repentance. As she is going, Mahisa is creating havoc both in heaven and earth. Parvati takes Durga” s Avatar and kills him. While doing this the Siva Linga sticks to her hands. The Devatas tell her it is a sin committed by her and she should bathe in the seven rivers to wash off her sins. With her sword she tears open the ground and the seven rivers emerge from there namely Gangai, Yamuna, Sarasvati, Kaveri, Narmada, Godavari and Sindhu.

6. What are the different Pujas performed in the temple?

Then the Lord is taken to Palliarai. The temple also has Oduvar who sings devotional songs during Puja. In this temple Abhisekam is done to the Lord 6 times in a day for Nataraja. The Nataraja Sannidhi is shaped like a chariot or Ter. The 12 Rasis of Navagrahas are embedded in the wheels of the chariot. In the Nataraja Sannidhi, Ambal is playing the Talam and Venugopaal is playing the flute.

7. What other Sannidhis are there?

There is a Visnu Durgai Sannidhi where she is holding the Sankha and Cakra. There is also Jora Hara Vinayaka Sannidhi–He rids of fever. Only Milagu Rasam Sadam is offered to him along with Paruppu Tohel (lentil chutney). Abhisekam is done with only hot water. The belief is that fever will vanish if Arcanai is done to him.