Pavitra means something in Hinduism, Sanskrit, Jainism, Prakrit, the history of ancient India, Marathi, Hindi. If you want to know the exact meaning, history, etymology or English translation of this term then check out the descriptions on this page. Add your comment or reference to a book if you want to contribute to this summary article. 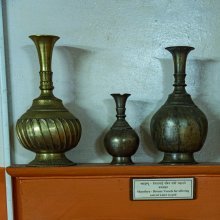 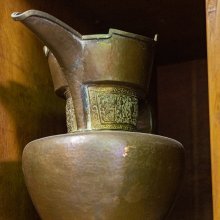 1) Pavitrā (पवित्रा) is another name for Tulasī, which is a Sanskrit word referring to Ocimum tenuiflorum (holy basil), from the Lamiaceae family. It is classified as a medicinal plant in the system of Āyurveda (science of Indian medicine) and is used throughout literature such as the Suśrutasaṃhita and the Carakasaṃhitā. The synonym was identified in the Rājanighaṇṭu (verses 10.148-149), which is a 13th century medicinal thesaurus.

2) Pavitra (पवित्र) is another name (synonym) for Tila, which is a Sanskrit name for the plant Sesamum indicum (sesame). This synonym was identified by Narahari in his 13th-century Rājanighaṇṭu (verses 16.111-116), which is an Ayurvedic medicinal thesaurus. Certain plant parts of Tila are eaten as a vegetable (śāka), and it is therefore part of the Śākavarga group of medicinal plants, referring to the “group of vegetables/pot-herbs”.

Pavitra (पवित्र) refers to “pure” and represents a particular dietetic effect according to the 17th century Bhojanakutūhala (dravyaguṇāguṇa-kathana), and is commonly found in literature dealing with the topics of dietetics and culinary art, also known as Pākaśāstra or Pākakalā.—Accordingly, the dietetic effect pavitra is associated with the following conditions: Food utensils made of Crystal (sphaṭika-pātra) and Vaiḍūrya.

1) Pavitra (पवित्र) refers to one who is “holy”, and is used by Satī to describe Śiva, according to the Śivapurāṇa 2.2.29. Accordingly as Brahmā narrated to Nārada:—“[...] Then inciting the fury of Dakṣa further, she said to Viṣṇu and all other devas and sages unhesitatingly.. Satī said:—‘[...] It is surprising that you are so wicked as to harbour ill feelings against Śiva who is the lord of all, whose dictum is untransgressable and who is the holiest of the holy (pavitra). You are certainly enemy of Śiva’”

2) Pavitra (पवित्र) refers to “pure”, according to the Śivapurāṇa 2.2.43.—Accordingly, as Brahmā narrated to Nārada:—“[...] thus I have described the fascinating story of Satī (i.e., satīcaritra) to you which confers worldly pleasures and salvation, which is divine and bestows all wishes. This narrative is flawless, pure (i.e., pavitra), sanctifying, conferring heavenly pleasures, glory, longevity and the pleasure of sons and grandsons”.

1b) (paritras)—one of the five devagaṇas of the 14th Bhauta Manu: are the seven worlds.*

2b) A main stream of Kuśadvīpa.*

Pavitrā (पवित्रा) refers to the name of a River mentioned in the Mahābhārata (cf. VI.10.20). Note: The Mahābhārata (mentioning Pavitrā) is a Sanskrit epic poem consisting of 100,000 ślokas (metrical verses) and is over 2000 years old.

Pavitrā (पवित्रा) refers to the eighteenth of twenty-six ekādaśīs according to the Garga-saṃhitā 4.8.9. Accordingly, “to attain Lord Kṛṣṇa’s mercy you should follow the vow of fasting on ekādaśī. In that way You will make Lord Kṛṣṇa into your submissive servant. Of this there is no doubt”. A person who chants the names of these twenty-six ekādaśīs (e.g., Pavitrā) attains the result of following ekādaśī for one year.

Pavitra (पवित्र) refers to a certain ceremony to be performed during pūjā (ritualistic worship), according to the Arcanāvidhipaṭala of Kāmikāgama.—[After Ṣoḍaṣa-Upacāra], the Ācārya then meditates on the Lord and places the holy pavitra on the crown of the liṅga in order to complete the pūjā. The Āgama declares that pavitra is that which protects the worshipper from falling (into hell) due to daily errors of thought, word and deed.

Pavitra (पवित्र) refers to 1) a “pair of Kuśa blades used at sarifices for purifying and sprinkling clarified butter”, and is mentioned in the Naiṣadha-carita 17.188.—Nārāyaṇa quotes Kātyāyana. 2) The word may here mean also “a cloth for straining Soma juice”. It is used in this sense in Vedic texts, e.g. Taittirīya-saṃhitā 1.8.21. Sāyaṇa quotes Taittirīya-brāhmaṇa 1.8.5.

Pavitra (पवित्र) participated in the war between Rāma and Rāvaṇa, on the side of the latter, as mentioned in Svayambhūdeva’s Paumacariu (Padmacarita, Paumacariya or Rāmāyaṇapurāṇa) chapter 57ff. Svayambhū or Svayambhūdeva (8th or 9th century) was a Jain householder who probably lived in Karnataka. His work recounts the popular Rāma story as known from the older work Rāmāyaṇa (written by Vālmīki). Various chapters [mentioning Pavitra] are dedicated to the humongous battle whose armies (known as akṣauhiṇīs) consisted of millions of soldiers, horses and elephants, etc.

Pavitra.—(EI 9), the argha vessel. (Ind. Ant., Vol. IX, p. 187), thread, 360 of which are tied round the neck of the image of Kṛṣṇa on Śrāvaṇa su-di 12. Cf. Caitra-pavitra. Note: pavitra is defined in the “Indian epigraphical glossary” as it can be found on ancient inscriptions commonly written in Sanskrit, Prakrit or Dravidian languages.

pavitra (पवित्र).—n (S) The Brahmanical string. 2 also pavitraka n S A ring of darbha (Poa cynosuroides) or of gold, worn on the forefinger at worship and certain rites.

pavitrā (पवित्रा).—m In wrestling. The attitude of readiness, with the right leg advanced. v kara.

pavitrā (पवित्रा).—m In wrestling. The attitude of readiness, with the right leg advanced. v kara.

2) Purified by the performance of ceremonial acts (such as sacrifices &c.).

-tram 1 An instrument for cleansing or purifying, such as a sieve or strainer &c.

4) The sacred thread worn by members of the first three castes of the Hindus.

9) A vessel in which the arghya is presented.

13) A means of purifying the mind.

(-trā) 1. Holy basil, (Ocymum sanctum.) 2. The name of a river, a little to the north-west of Haridwar; the Pabar. 3. The twelfth of the light fortnight of Sravana, a festival in honour of Vishnu. E. pū to purify, aff. karaṇe itra.

Pavitra (पवित्र) in the Sanskrit language is related to the Prakrit word: Pavitta.

2) [adjective] having or characterised by, moral virtue; righteous; virtuous; sinless.

1) [noun] that which is used to make religiously or spiritually pure.

2) [noun] the quality or state of being religiously or spiritually perfect or pure.

3) [noun] that by which religious merit is earned.

4) [noun] the grass Desmostachya tripinnata of Poaceae family, considered as sacred one, used for religious purposes.

5) [noun] a kind of ring made with this grass blade, used to wear on the ring-finger of the right-hand, while performing certain religious rites.

6) [noun] the ring-finger of the right hand.

8) [noun] the sacrificial thread, worn on the left shoulder passing under the right arm, by men of certain castes; sacred-thread.

Search found 31 books and stories containing Pavitra, Pavitrā, Pāvitra; (plurals include: Pavitras, Pavitrās, Pāvitras). You can also click to the full overview containing English textual excerpts. Below are direct links for the most relevant articles:

Verse 11.85 < [Section VII - Special Expiation for Special Offences: (a) For Killing a Brāhmaṇa]