Sculptures in temples in Kumbakonam: photo 640

Photo 640 of 640 in Gallery: Sculptures in temples in Kumbakonam 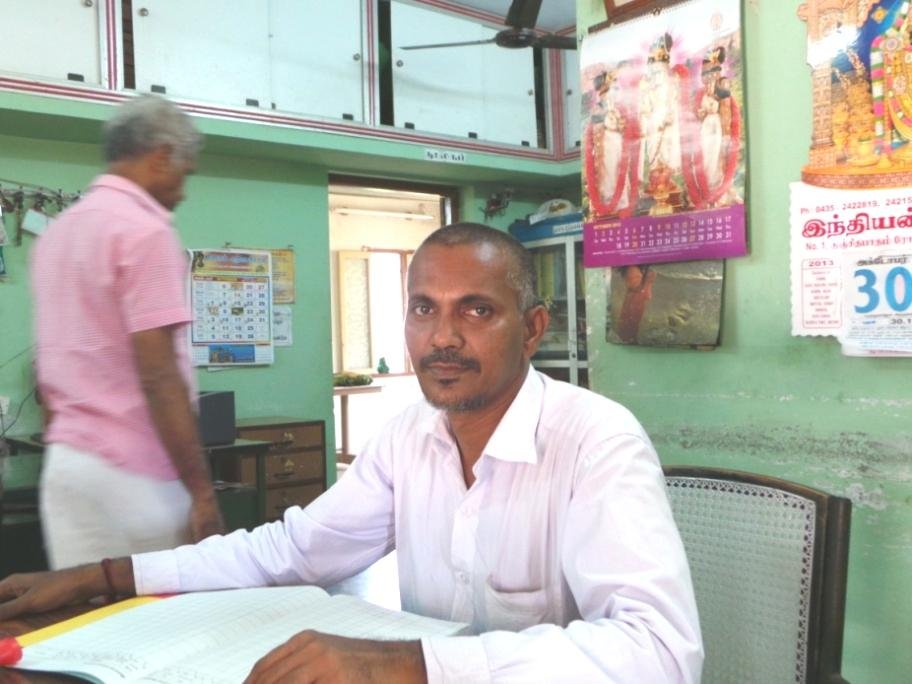 1. Since how many years are you working here?

2. Can you give some information about the history of this temple?

3. Can you tell me something about Durgai Amman temple here?

A. Durgai Amman, Vinayakar in front of Svami Sannidhi, Bhairavar and Sanmukha Vigrahams were in the palace deities of Chola Maharaja and were kept in a village called Chola Maligai. After the downfall of the Chola king these Vigrahams were brought and kept here.

4. Who is the Mulavar here?

5. Can you describe Palvalai Nayaki?

A. She is standing and has Caturbhujam. She is having front hands in Abhayam [Abhaya] (right) and Uru Hasta (left). Back hands are holding Pasankusam [Pasankusa] and Aksamala.

6. Can you tell me something about Durgai Amman here.

A. She is in standing posture. Below her is Mahisa whom she has slayed. Behind her is the lion facing left side. She is in Tribhanga, Astabhujam [Astabhuja] and Santasvarupam. She is holding Sankha, Cakra, Dhanus, Bana, Khadga, Khetaka. Front hands are in Abhaya and Uru Hasta. If you see her from one side it looks as if she is asking the worshipper what he wants. If you see from the other side she seems to be telling you to be patient.

7. Any speciality in the construction here?

A. If you see the Jnanambikai Sannidhi, the pillars in the Maha Mandapam [Mandapa] have different kinds of Yalis engraved in them. You will find each Yali different. There are lots of sculptures on the pillar, some very unusual and there are several dance sculptures also.

8. Which directions does the Garbha Graha face?

9. Are there any special Vimanam [Vimana] s here for any of the gods?

A. All of them have Vimanams [Vimanas] but no special names. Only in Vaisnava

10. How many Prakarams are there in the temple?

11. How many Mandapams are there in the temple?

12. How many Puskarni’s are there in this temple?

A. Here there is Jnana Vavi, a well called Tapas Kinar and Ramar Tirtham. Outside there is Teppa Kulam [Kula] and Gayatri Kulam [Kula].

14. What are the UtsavaMurtis here?

15. Which Utsavams are held in the temple specially for Durgai Amman?

A. Throughout Adi Masam [Masa] there is Utsavam [Utsava] held for Durgai Amman specially on Fridays, Tuesdays and Sundays. During Navaratri 9 days festival is held. Golu is kept and Vijayadasami is celebrated. In the Sivalaya, Vaikasi Visakam Brahmotsavam [Visaka Brahmotsava] is held. There is a celebration for Jnanasambandar which is called Muttu Pandal Utsavam [Utsava].

17. Were there Devadasis attached to this temple?

A. Yes there were. The Gayatri Kulam [Kula] was for them. They bathed there. Devaradiyar Kulam was another name for it. The street in the front called Mulaivur Vidi was occupied by them. But there is no evidence of the kind of work they did in the temple. It is not known whether they danced in this temple.