Ashva means something in Buddhism, Pali, Hinduism, Sanskrit, Jainism, Prakrit, the history of ancient India, Hindi. If you want to know the exact meaning, history, etymology or English translation of this term then check out the descriptions on this page. Add your comment or reference to a book if you want to contribute to this summary article.

The Sanskrit terms Aśva and Aśvā and Āśva can be transliterated into English as Asva or Ashva, using the IAST transliteration scheme (?). 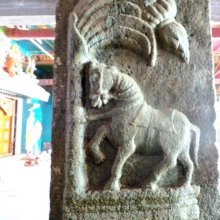 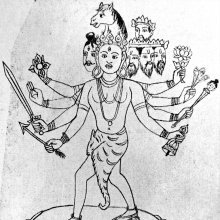 [«previous (A) next»] — Ashva in Purana glossary
Source: Google Books: Cultural History from the Vāyu Purāna

Aśva (अश्व) falls under the category of domesticated animals (grāmya-paśu) according to the Vāyu Purāṇa.

Aśva—The horse is said to have been born of the Creator’s feet. It is included in the list of domesticated animals. We have notes references to stables for horses and to horse-riding. Horses are good gifts for Brahmins in śrāddha and they are regarded useful in sacrificis. Horses were yoked to chariots. A horse was one of the select jewels (atiśaya-ratnāni) of a cakravartin in the Tretā age. The horses of the Gāndhāra country are said to be the best amongst the species. The Aśvinī-nakṣatra is said to be favourable to the acquisition of horses.

1) Aśva (अश्व).—A demon. This was the same demon who later on was born as Aśoka, King of Kaliṅga. (Chapter 67, Ādi Parva, Mahābhārata).

1f) A class of people similar to Caṇḍālas.*

1g) Created from the feet of the Lord;1 horses of Tāmrā line.2

Aśva (अश्व) refers to one of the various kinds of articles used for donation, according to the 10th century Saurapurāṇa: one of the various Upapurāṇas depicting Śaivism.—Accordingly, the tenth chapter contains the praise and classification of donations. It narrates the characteristics of proper recipients and the results of giving different kinds of articles like Bhūmi, Vidyā, Anna, Jala, Tila, Vāsa, Dīpa, Yāna, Śayyā, Dhānya, Aśva, Śāka, Indhana, Chatra, Auṣadha, Go, etc.

[«previous (A) next»] — Ashva in Ayurveda glossary
Source: archive.org: Sushruta samhita, Volume I

Aśva (अश्व)—Sanskrit word for the animal “horse”. This animal is from the group called Grāmya (‘domestic animals’). Grāmya itself is a sub-group of the group of animals known as Jāṅghala (living in high ground and in a jungle).

Aśva (अश्व) refers to the “horse”, whose meat (māṃsa) is classified as “terrestrial” (bhūcara) according to the 17th century Bhojanakutūhala (dravyaguṇāguṇa-kathana), and is commonly found in literature dealing with the topics of dietetics and culinary art, also known as Pākaśāstra or Pākakalā.—The text [māṃsa-prakaraṇa] says the three fold division of meat [such as terrestrial (bhūcara)...]. Here different types of meat and their properties are discussed in detail. The terrestrial animals are [viz., aśva (horse)].

Aśva (अश्व) refers to either the Horse or the Kathiawari breed (both Equus Caballus), according to scientific texts such as the Mṛgapakṣiśāstra (Mriga-pakshi-shastra) or “the ancient Indian science of animals and birds” by Hamsadeva, containing the varieties and descriptions of the animals and birds seen in the Sanskrit Epics such as the Ramayana and Mahabharata.

Aśva (अश्व, “Horse”):—In Vedas horse has deeper meaning. “It is an image of the great dynamic force of life, of the vital and nervous energy. It is a force, a figure of prāṇa, the universal life energy (prāṇāyāma is based on this principle)” and “he who knows the summit of intelligence of the horse, becomes illumined and fit for the sacrifice.” Subtly it can be explained that Rudra presides and control our prāṇa. Thus salutations are offered to Him as the controller of prāṇa.

Aśvā (अश्वा, “mare”) refers to the first of eight yoni (womb), according to the Mānasāra. It is also known by the name Dhvajā. Yoni is the fourth of the āyādiṣaḍvarga, or “six principles” that constitute the “horoscope” of an architectural or iconographic object. Their application is intended to “verify” the measurements of the architectural and iconographic object against the dictates of astrology that lay out the conditions of auspiciousness.

The particular yoni (e.g., aśvā) of all architectural and iconographic objects (settlement, building, image) must be calculated and ascertained. This process is based on the principle of the remainder. An arithmetical formula to be used in each case is stipulated, which engages one of the basic dimensions of the object (breadth, length, or perimeter/circumference). The first, third, fifth and seventh yonis are considered auspicious and therefore to be preferred, and the rest, inauspicious and to be avoided.

[«previous (A) next»] — Ashva in Vyakarana glossary
Source: Wikisource: A dictionary of Sanskrit grammar

[«previous (A) next»] — Ashva in Dharmashastra glossary
Source: Prācyā: Animals and animal products as reflected in Smṛti texts

Aśva (अश्व) refers to “horses”, according to the Bṛhatsaṃhitā (chapter 2), an encyclopedic Sanskrit work written by Varāhamihira mainly focusing on the science of ancient Indian astronomy astronomy (Jyotiṣa).—Accordingly, “We shall now proceed to give a brief description of (the qualifications of) a jyotiṣaka. [...] In Yātrā, he must know the fitness or unfitness of a tithi (lunar day), vāra (week day), karaṇa, nakṣatra, muhūrta, and lagna (a sign of zodiac) and yoga for particular purposes. He must be able to interpret natural gestures and dreams; he must be able to state when a prince ought to start for battle to secure success in war; he must be learned in rules relating to ablutions and sacred fire ceremonies in honour of the planets and offerings to evil spirits; he must be able to interpret phenomena connected with such sacred fires and with elephants and horses [i.e., hastin-aśva-iṅgita] while mounting the same”.

Aśva (अश्व, “horse”) represents an incarnation destination of the tiryaggati (animal realm) according to the “world of transmigration” section in the 2nd century Mahāprajñāpāramitāśāstra (chapter XXVII).—The Bodhisattva sees the animals (tiryak) undergoing all the torments: they are made to gallop by blows of the whip or stick; they are made to make long journeys carrying burdens; their harness is damaged; they are branded with hot iron. People who, in their former lives, have trussed them up, whipped them or been guilty of crimes of this kind, assume the animal form of an elephant (haja), a horse (aśva), a cow (go), a sheep (eḍaka) or a deer (mṛga).

Aśva (अश्व, “horse”) or Aśvaratna refers to the “horse jewel” and represents the second of the “seven jewels of universal monarchs” (saptaratna) as defined in the Dharma-saṃgraha (section 85). The Dharma-samgraha (Dharmasangraha) is an extensive glossary of Buddhist technical terms in Sanskrit (e.g., aśva). The work is attributed to Nagarjuna who lived around the 2nd century A.D.

[«previous (A) next»] — Ashva in Jainism glossary
Source: Google Books: Jainism: An Indian Religion of Salvation

Aśva (अश्व, “horse”).—One of the fourteen gems (ratna) serving the Cakravartin;—The aśva is a beautiful horse which is endowed with auspicious signs.

Aśva.—(IE 7-1-2), ‘seven’. Note: aśva is defined in the “Indian epigraphical glossary” as it can be found on ancient inscriptions commonly written in Sanskrit, Prakrit or Dravidian languages.

[«previous (A) next»] — Ashva in Sanskrit glossary
Source: DDSA: The practical Sanskrit-English dictionary

-śvam 1 A number of horses.

2) A chariot drawn by horses.

3) The state or action of a horse (aśvasya bhāvaḥ karma vā Sk.).

6) Name of a teacher (with the patron. Sāmudri), [Śatapatha-brāhmaṇa xiii]

Asva (अस्व) in the Sanskrit language is related to the Prakrit words: Assa, Āsa.

[«previous (A) next»] — Ashva in Hindi glossary
Source: DDSA: A practical Hindi-English dictionary

Aśva (अश्व) [Also spelled asv]:—(nm) a horse; ~[medha] ([yajña]) the horse sacrifice—a celebrated ceremony dating back to the Vedic period, performed by a monarch desirous of becoming a [cakravartī].

Chapter 66 - On the features of the Horse (aśva-lakṣaṇa)

Chapter 9 - On the course of Venus (śukra-cāra)