Arati means something in Buddhism, Pali, Hinduism, Sanskrit, Jainism, Prakrit, the history of ancient India, Marathi, Hindi. If you want to know the exact meaning, history, etymology or English translation of this term then check out the descriptions on this page. Add your comment or reference to a book if you want to contribute to this summary article.

Alternative spellings of this word include Aarti. 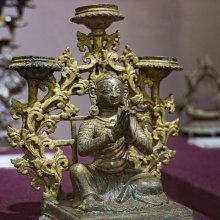 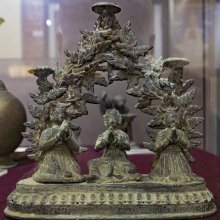 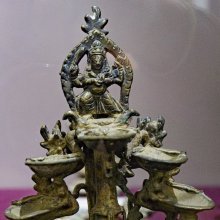 Ārati (आरति).—A ceremony in which one greets and worships the Lord in the Deity form of the Supreme Personality of Godhead by offering Him incense, a flame in a lamp with ghee-soaked wicks, a flame in a lamp containing camphor, water in a conchshell, a fine cloth, a fragrant flower, a peacock-feather, and yak-tail wisk, accompanied by bell-ringing and chanting.

Ārati (आरति) refers to:—The ceremony of offering a deity articles of worship, such as incense, lamp, flowers and fan, accompanied by chanting and bell-ringing. (cf. Glossary page from Bhajana-Rahasya).

[«previous (A) next»] — Arati in Kavya glossary
Source: archive.org: Naisadhacarita of Sriharsa

Ārati (आरति) or Ārātrika is the name of a ceremony of “circular waving of lights before idols” [Cf. Nīrājana].—The Nīrājana ceremony was essentially a Śānti or a rite to counteract evil influences. Gradually it lost its military character, but continued as a propitiatory rite. Cf. Rucipati in his commentary on Anargharāghava 2.10. The circular waving of lights was a special feature of the Nīrājana ritual, and that before idols is also known as Ārātrika, popularly called Ārati. In Kāvya poetry the word is often used in the sense of “illumination” or “adoration as with waving lights”.

[«previous (A) next»] — Arati in Ayurveda glossary
Source: Wisdom Library: Local Names of Plants and Drugs

Arati [అరటి] in the Telugu language is the name of a plant identified with Musa x paradisiaca L. from the Musaceae (Banana) family having the following synonyms: Karkandela x malabarica, Musa x champa, Musa x dacca. For the possible medicinal usage of arati, you can check this page for potential sources and references, although be aware that any some or none of the side-effects may not be mentioned here, wether they be harmful or beneficial to health.

Arati (अरति):—Restlessness due to dissatisfaction

Arāti (अराति) refers to “enemies”, according to the Bṛhatsaṃhitā (chapter 12), an encyclopedic Sanskrit work written by Varāhamihira mainly focusing on the science of ancient Indian astronomy astronomy (Jyotiṣa).—Accordingly, “[...] I will now speak of the rules of the arghya (offering) to be presented to Agastya as stated by the Ṛṣis. [...] The offering to be made by princes in honour of Agastya shall consist of the fragrant flowers of the season, of fruits, of precious stones, of gold cloths, of cows, of bulls, of well-cooked rice, of sweet-meats, of curdled milk, of coloured rice, of perfumed smoke and fragrant paste. A prince making this offering, with a truly devout spirit, on every occasion of the reappearance of the star Canopus for 7 years will be freed from disease, will triumph over his enemies [i.e., nirjita-arāti-pakṣa] and will become the sole ruler of the Earth”.

One of the three daughters of Mara, the others being Tanha and Raga. (In the Buddha Carita (xiii.), their names are Rati, Priti and Trsna; in the Lal. (353), Rati, Arati and Trsna).

Seeing their father disconsolate after his repeated attempts to foil Gotamas quest for Enlightenment, they offered to tempt the Buddha with their wiles. This was in the fifth week after the Enlightenment. With Maras approval, they came to the Buddha in various forms and in various guises, as he sat at the foot of the Ajapala banyan tree, and danced and sang before him. In the end the Buddha told them that he was beyond temptation by the pleasures of the senses and they went back to their father (S.i.124-7; J.i.78-80, 469; DhA.i.201f., iii.196,199; SN.v.835).

In the Samyutta account, they are said to have asked the Buddha questions regarding himself and his teachings. Aratis question was how a man who had already crossed the five floods could cross the sixth. For explanation see KS.i.158, n.3.

Arati (अरति) refers to one of the three daughters of Māra mentioned in the 2nd century Mahāprajñāpāramitāśāstra (chapter XXIV).—Accordingly, “While the Buddha was under the Bodhi tree, king Māra, out of spite (daurmanasya) sent him the three princesses, Lo kien (Ragā), Yue pei (Arati) and K’o ngai (Tṛṣṇā). They came showing off their bodies and using all sorts of charms to try to corrupt the Bodhisattva, but the latter did not let himself become disturbed and did not look at them”.

[«previous (A) next»] — Arati in Jainism glossary
Source: archive.org: Trisastisalakapurusacaritra

Arati (अरति, “discontent”) refers to one of the  hardships (parīṣaha), or “series of trials hard to endure” according to the Triṣaṣṭiśalākāpuruṣacaritra 10.1 (Incarnation as Nandana). While practicing penance for a lac of years, Muni Nandana also endured a series of trials hard to endure (e.g., arati). Nandana is the name of a king as well as one of Mahāvīra’s previous births.

Arati (“dislike”) according to Ara in his sermon on rāga and dveṣa:—“[...] People who are led by a mind whose knowledge has been destroyed by the darkness of love, etc., fall into hell like a blind man, led by a blind man, into a well. Passion (rati) for and joy (prīti) in objects, etc., are called love (raga); the wise call dislike (arati) and discontent (aprīti) with these same objects hate (dveṣa). These two, very powerful, a bond for all people, are known as the root and bulb of the tree of all pains. Who would be open-eyed with astonishment in happiness, who would be pitiable in sorrow, who would fail to reach emancipation, if there were no love and hate here? [...]”.

Arati (अरति).—What is meant by ‘dissatisfaction’ (arati)? Promoting dissatisfaction amongst others, destroying pleasures of others, association with the wicked are the activities implied by arati. What is the difference between arati and rati? Arati implies restlessness and rati implies rest.

Arāti (अराति) refers to the “enemy” (of infinite evil), according to the 11th century Jñānārṇava, a treatise on Jain Yoga in roughly 2200 Sanskrit verses composed by Śubhacandra.—Accordingly, “Where is the escape from the bottom of the pit of hell for the living soul who is continually afflicted by the enemy of infinite evil (duranta-durita-arāti-pīḍita)? If he emerges from that, the sentient being is born among the immobile beings or by some action reaches the state of mobile beings”.

Ārati.—(EI 1), a lamp; same as ārātrika. Note: ārati is defined in the “Indian epigraphical glossary” as it can be found on ancient inscriptions commonly written in Sanskrit, Prakrit or Dravidian languages.

[«previous (A) next»] — Arati in Marathi glossary
Source: DDSA: The Molesworth Marathi and English Dictionary

arati (अरति).—a S That dislikes or is disgusted or dissatisfied.

[«previous (A) next»] — Arati in Sanskrit glossary
Source: DDSA: The practical Sanskrit-English dictionary

3) The sixth position in (astronomy).

Ārāti (आराति).—m.c. for arati, displeasure (in this meaning Sanskrit arati), by em. (required by meter) in Lalitavistara 325.11, where word-division should be: ārātīya ratīya (both instr. sg.) saṃvase na ca sārdhaṃ, and I do not dwell together with displeasure or pleasure.

9) [v.s. ...] particular evil spirits (who frustrate the good intentions and disturb the happiness of man), [ib.]

Arati (अरति) in the Sanskrit language is related to the Prakrit words: Arai, Arāi, Ārāḍi.

[«previous (A) next»] — Arati in Hindi glossary
Source: DDSA: A practical Hindi-English dictionary

Āratī (आरती) [Also spelled aarti]:—(nf) a ceremony performed in adoration of a deity or any outstanding personage or guest by circular movement of a lighted lamp before his person; —[utāranā] to perform [āratī].

Araṭi (ಅರಟಿ):—[noun] (dial.) a thick, sticky paste made of the jowar (Sorghum vulgare) flour, lime and jaggery, which is used to block the holes in water vessels.

2) [noun] a feeling of displeasure resulting from injury, mistreatment, opposition, etc., and usually showing itself in a desire to fight back at the supposed cause of this feeling; anger.

1) [noun] a person who hates another, and wishes or tries to injure him; a foe; an enemy.

2) [noun] (astrol.) (in the horoscope) sixth house from the first place.

1) [noun] a waving of lights before a person or an idol of a deity.

2) [noun] the lights used or camphor burned for this purpose.

Ārati (ಆರತಿ):—[noun] a ceasing or stopping, either forever or for some time; cessation.

Verse 9.15 - The afflictions caused by the conduct-deluding karmas < [Chapter 9 - Stoppage and Shedding of Karmas]