Sculptures in temples in Kumbakonam: photo 6

Photo 6 of 640 in Gallery: Sculptures in temples in Kumbakonam 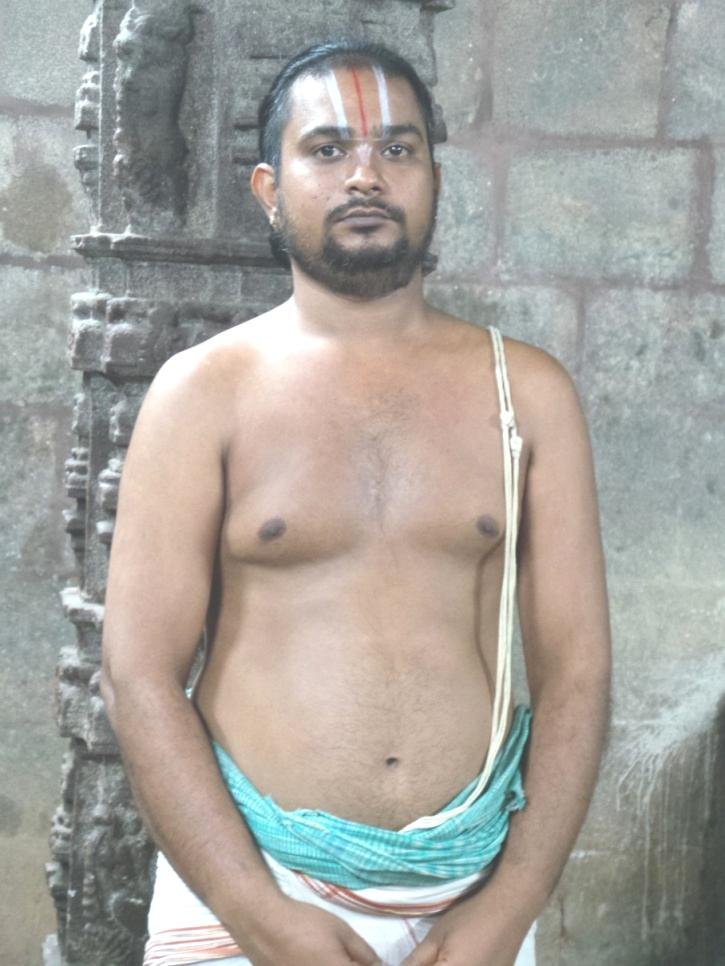 1. Can you tell something about the history of this temple?

A. This temple is the third one out of the 108 Divya Desams which are sung by the Alvars. Out of the 12 Alvars 7 have sung about Lord Sarngapani and done Mangalasasanam. Tirumalisai Alvar requested the Lord to rise and talk. So the Lord tries to get up. Hence as an answer to his devotee’s prayer the Lord takes the Uttanasayi position as if trying to get up. In Srirangam he is in Bhogasayanam. Here, Tayar incarnated in a Lotus with 1000 petals in the Puskarini Potramarai Kolam [Kola] which is behind the temple. She was brought up by Hemarsi.The tank is also called as Hemapuskarini. Tayar Komalavalli desired and did penance to marry the Lord.

Hence the Lord is said to have arrived in a chariot of elephants and horses to marry her. The Garbha Graha Sannidhi is for this reason shaped like a chariot drawn by elephants and horses. Lord Sarngapani then wedded Tayar Komalavalli. After this event the devotees prayed to him to stay on here. Hence as an answer to their prayers the Lord settled here in this temple. The temple is built in such a way that one has to worship Tayar Komalavalli Mahalaksmi and then have a Darsana of the Lord. The Lord here is called by several names–Aravamudan, Aparyaptamudan, Sarngaraja, Sarngapani and Sarngesan. Here Lord Sarngapani is with Sridevi and Bhumidevi. Mulasthana Murti is Uttanasayana Murti. Utsava Murti is Caturbhujam [Caturbhuja] (with four hands) holding Sankha, Cakra, Gadai, Sarngam, Khadgam [Khadga] and Banam [Bana]–the first three being attached Ayudhams and the other three being detachable Ayudhams.

2. How many hands does Tayar have and what does she hold?

3. What is the structure of the Garbha Graham here?

A. It is shaped like a chariot drawn by elephants and horses since the Lord came from Vaikuntam [Vaikunta] to seek her hand. The Garbha Graham [Graha] has two doors–Uttarayanam [Uttarayana] and Daksinayanam. This temple is also called as Bhuloka Vaikuntam.

4. Is there any special name given to the Garbha Graha Vimana?

A. It is called Vaitika Vimanam. The Vimanams are specific to the temples.

5. How many Prakarams are there in this temple?

A. There are 4 Prakarams–One is the outside big Vidi Prakaram, the second is as soon as you come in, the third is around both the Lord and Tayar together and fourth is only around Tayar.

6. What structures do you find in the Prakarams?

7. How many Mandapams are there in the temple in all?

8. Is there any Sthala Vrksa in this Kovil?

A. There is no Sthala Vrksa in this temple.

9. How many times is Puja done in this temple?

A. Arukala Puja (6 times) is performed in this temple.

Visvarupam [Visvarupa] at morning 7 am. He is offered Palam [Pala] (fruits) and Pal (Milk).

Tiruvaradanam between 9.00 and 9.30am. Venpongal is offered. At this time

Sayaraksai between 6 and 6.30 pm. Dosai and Cundal is offered.

Akalam [Akala] or Irendamkalam–Between 7.30 and 8.00 pm. Again Venpongal is offered.

10. Who are the Utsavamurtis here?

11. Why is the Mulavar Vigraham always black?

12. How many Utsavams are celebrated in the temple?

A. Two times Brahmotsavam [Brahmotsava] is celebrated–in Cittirai Masam and from end of Margali Masam.

So in a year in all the twelve months there are festivals celebrated.

13. What are the Sannidhis found in this temple?

14. Were Devadasis associated with this temple in the olden days?

A. Yes it seems there were. After the Utsavamurtis completed Vidi Pradaksinam [Pradaksina] or Prahara Pradaksinam, the Dasis would give the Ghata Dipam [Dipa] to offer to the Lord through Nrtya. This Nrtya would be performed under the Kodi Maram. The Arati which is done to ward off evil eye is called Ghata Diparati. Since it is shaped as a Kumbham [Kumbha] it is called Kumbharati or Ghatarati.

15. Do you receive salary from the state government?

A. No, this is tradition handed down. So government gives nothing. But they give us groceries like rice, Dal, sugar etc on a monthly basis and some funds are given to us which is donated by the people or collected for Arcanai.