Sculptures in temples in Kumbakonam: photo 566

Photo 566 of 640 in Gallery: Sculptures in temples in Kumbakonam 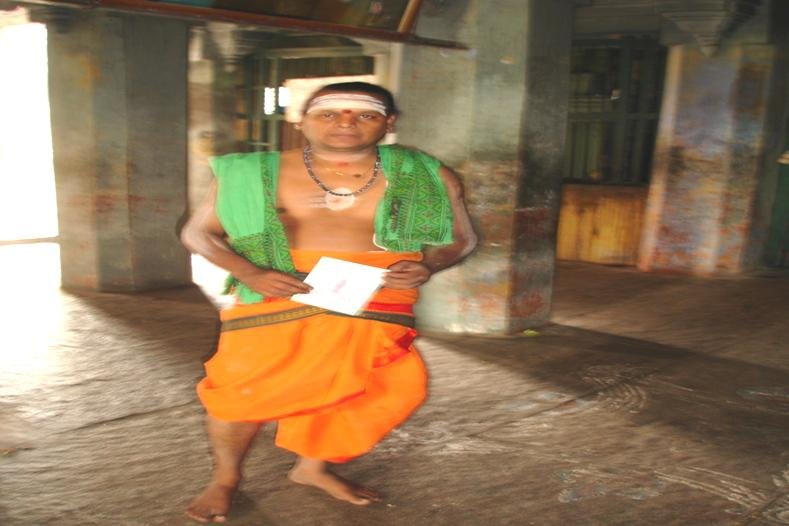 Interview with the Gurukkal at the Somesvarar temple

A. My name is G. Ganesha Gurukkal.

2. How many entrances are there to this temple?

A. This temple had four entrances. One entrance was closed 40–50 years back since the Vaisnavite and Saivite temples were adjacent to each other.

3. Which side does Svami (Siva Linga [Lingam]) face?

A. Svami is east facing.

4. Who built this temple and how long back?

5. What is the name of Siva in the temple?

A. The Lord is called Sikkesvarar and Ambal is Tenarmoli. Since Siva was worshipped by Candra it is called Somesvarar and since Guru Bhagvan was also graced he is also called Vyala Somesvarar.

6. How many times a day is Puja done to the Lord?

A. Puja is done four times in a day–

7. Who are the Utsava Murtis in the temple?

A. Swami Somaskandar and Ambal form the Utsava Murtis

8. What are the various Utsavams celebrated here?

9. How many hands does Somaskandar have?

A. He is Caturbhujam. Main right and left hands are in Abhaya and Suci respectively. The upper right hand holds the Parasu. The second left hand is holding Man or deer.

10. How many hands does Adipura Ambal have?

A. She is also Caturbhujam. Front right and left hands are in Abhaya and

Varada. The back right and left hands are holding Aksamala and Padma.

11. What does Nartana Ganapati hold in his hands?

A. Nartana Ganpati is also Caturbhujam. He is holding Abhaya and Varada in his main right and left hands. In the back hands he is holding Pasa and Gada or mace. Kalyana Vinayaka idol is prayed to for removing obstacles in marriages.

A. Sanmukha has six faces and twelve hands. During Kartikai there is Jatari for Murugan.The main right and left hands of Sanmukhar is in Abhaya and Varada. Rest of his hands are holding Ayudhams for Surasamharam. He is riding a peacock.

13. Can you give some information about Ardhanarisvara Vigraha which is there?

A. Svami and Ambal are joined with each other to form Ardhanarisvara. Ambal is on left side of Svami. On the right side Siva’s one right hand is on Nandi and the other hand is holding Ankusa. On the left side Ambal has only one hand which is holding Padma.The other hand cannot be seen. On the back side of Nandi is Singham [Singha] which is not visible and which is the Vahana of Ambal