Ankusha means something in Buddhism, Pali, Hinduism, Sanskrit, Jainism, Prakrit, Marathi. If you want to know the exact meaning, history, etymology or English translation of this term then check out the descriptions on this page. Add your comment or reference to a book if you want to contribute to this summary article. 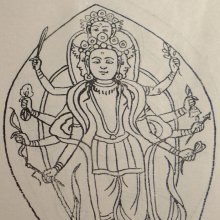 [«previous (A) next»] — Ankusha in Shilpashastra glossary
Source: Google Books: The Theory of Citrasutras in Indian Painting

Aṅkuśa or the elephant goad is a weapon consisting of a sharp metal hook attached to a wooden handle.

The elephant goad (aṅkuśa) of Gaṇeśa — represents perseverance on the path of spiritual practice. The spiritual path is very arduous and difficult but if we are committed then Gaṇeśa when propitiated will prod us by means of the Goad, and guide us to our supreme destination — union with the Divine. But that incentivization will require pain and suffering!!

Aṅkuśa (Elephant Goad) - Incentive to continue in spiritual practice and the application of the teachings. The urging of the guru which drives us to practice and apply. Also - the control of anger.

Aṅkuśa (अङ्कुश, “goad”) refers to one of the several “attributes” (āyudha) or “accessories” of a detiy commonly seen depicted in Hindu iconography, defined according to texts dealing with śilpa (arts and crafs), known as śilpaśāstras.—Aṅkuśa or the elephant goad is a weapon consisting of a sharp metal hook attached to a wooden handle.

Aṅkuśa also represents “colourlessness”, referring to one of the attributes of Lord Śiva.

[«previous (A) next»] — Ankusha in Purana glossary
Source: Google Books: Cultural History from the Vāyu Purāna

Aṅkuśa (अङ्कुश) refers to a weapon (“hook”, “elephant goad”). It is a Sanskrit word defined in the Dhanurveda-saṃhitā, which contains a list of no less than 117 weapons. The Dhanurveda-saṃhitā is said to have been composed by the sage Vasiṣṭha, who in turn transmitted it trough a tradition of sages, which can eventually be traced to Śiva and Brahmā.

[«previous (A) next»] — Ankusha in Shaivism glossary
Source: Shodhganga: Iconographical representations of Śiva

Aṅkuśa (अङ्कुश) or Aṅkuśāgama refers to one of upāgamas (supplementary scriptures) of the Prodgītāgama which is one of the twenty-eight Siddhāntāgama: a classification of the Śaiva division of Śaivāgamas. The Śaivāgamas represent the wisdom that has come down from lord Śiva, received by Pārvatī and accepted by Viṣṇu. The purpose of revealing upāgamas (e.g., Aṅkuśa Āgama) is to explain more elaborately than that of mūlāgamas (e.g., Prodgīta-āgama) and to include any new idea if not dealt in mūlāgamas.

Aṅkuśa (अङ्कुश) refers to one of the various Devatā weapons and represents a type of “temple implement (instrument)” as described in the Karaṇalakṣaṇavidhi-paṭala section of the Uttara-Kāmikāgama.—The instruments should be according to the particular śāstra followed at the temple. Some of the instruments mentioned are weapons of all Devatās including [viz., aṅkuśa].

Aṅkuśa (अङ्कुश) is the name of a Buddha under whom Śākyamuni (or Gautama, ‘the historical Buddha’) acquired merit along the first through nine bhūmis, according to the Mahāvastu. There are in total ten bhūmis representing the ten stages of the Bodhisattva’s path towards enlightenment.

Aṅkuśa is but one among the 500 Buddhas enumerated in the Mahāvastu during a conversation between Mahākātyāyana and Mahākāśyapa, both principle disciples of Gautama Buddha. The Mahāvastu is an important text of the Lokottaravāda school of buddhism, dating from the 2nd century BCE.

[«previous (A) next»] — Ankusha in Jainism glossary
Source: archive.org: The Jaina Iconography

Aṃkuśā of the Śvetāmbaras is to be canonically sculpturedas seated on a lotus, and having four hands with a sword, noose, spear and goad. The Digambaras to whom this Yakṣiṇī is known as Anantamatī describe her as being carried by a swan and as holding in her hands a bow, arrow, fruit and Varada. The name “Aṃkuśā” appears to be derived from the Aṃkuśā or goad, which the Yakṣiṇī carries. In the same name, we find a Vidyādevī who also bears a goad. The name Anantamatī originates very evidently from Anantanātha, the Jina and master, whom the Yakṣiṇī waits upon. Brahmā’s wife is Sarasvatī; here the origin of the swan as a vehicle might be due to this connection.

Aṅkuśa (अङ्कुश).—From the time of his birth, Vṛṣabhanātha’s body had the insignia of thunderbolt, aṅkuśa, etc. which is Viṣṇu’s sings. King Nābhi called him Vṛṣabhanātha (par excellence) on account of his beautiful body, exceeding brilliance, strength, wealth, valour and courage.

aṅkusa : (m.) a pole with a hook used for plucking fruits or to guide an elephant.

[«previous (A) next»] — Ankusha in Marathi glossary
Source: DDSA: The Molesworth Marathi and English Dictionary

aṅkuśa (अंकुश).—m (S) An elephant goad. 2 Also aṅkuśī f A pole with a hook or blade at the extremity, for gathering fruits or flowers; a meak. hattīlā aṃ0 kēvaḍhā asatō Behold how small a goad governeth the great elephant! Used where little and mean persons or things rule or manage great ones.

[«previous (A) next»] — Ankusha in Sanskrit glossary
Source: DDSA: The practical Sanskrit-English dictionary

(-śaḥ-śaṃ) The hook used to drive an elephant. E. aka to go, and uśac Unadi aff. with num inserted.

(-ṣaḥ-ṣaṃ) The hook or goad for driving an elephant. E. See aṅkuśa, u being made long.

Part 3: Meeting of Rāma and his sons < [Chapter IX - Sītā’s purification and taking of the vow]